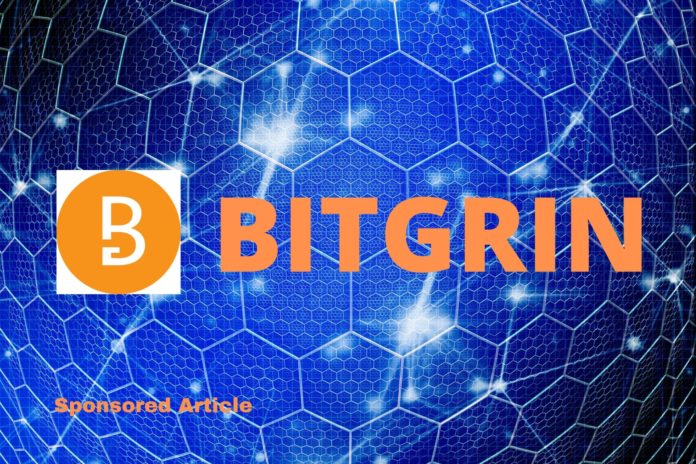 Over the last decade since the inception of Bitcoin, several public blockchain networks and their native cryptocurrencies have arrived in the market. While these platforms solve the important issues of transparency of instant global payment settlements, they lack to cater to the privacy requirements of its users.

Addressing this issue of users’ privacy, a new store-of-value cryptocurrency dubbed BitGrin has arrived in the crypto market with its mainnet launched earlier this month of February 8, 2019.

The BitGrin (XGB) cryptocurrency is an offshoot derived by a fork in the GRIN coin and leverages the MimbleWimble protocol to provide absolute privacy. Apart from privacy, the platform also addresses the issue of scalability and offers a sound economic model similar to that of Bitcoin.

The MibleWimble protocol was first proposed in July 2016 by an anonymous user in the Bitcoin developers chatroom. Unlike a public blockchain, the MW protocol aims to keep the transactions completely secret without disclosing the sender and the receiver information.

Besides, the MimbleWimble protocol facilitates transactions without using any addresses. This makes it impossible for any third-party to determine who is sending or receiving the BitGrin (XGB) tokens.

The good thing about the MW protocol is that to validate new transactions in the network, it doesn’t require the entire history of all transactions, as in the case of Bitcoin. The provolone also encrypts the transaction amounts using the Elliptic Curve Cryptography method.

The Elliptic Curve Cryptography method structures transactions trough the possession of private keys and using the verification of zero sums. The approach only verifies the inputs and outputs of the transactions by obfuscating the entire transaction trail.

The MimbleWimble protocol also addresses the issues of scalability by significantly reducing the amount of information to be stored on the blockchain.

In the case of BitGrin, it uses a special broadcasting delay mechanism dubbed Dandelion which sends the transactions through a series of randomly selected peers. Later, it diffuses these transactions to the entire network.

Besides, it also uses a mechanism called CoinJoin that combines payments from multiple senders into a single transaction. This makes it difficult for any third party to decode which transaction is intended for which recipient.

As the peer pool grows in size, it becomes more difficult to link the inputs to transactions.

As said, in addition to providing users absolute privacy, BitGrin is currently focused on offering its users a sound economic model that is scalable.

BitGrin’s economic model is quite similar to that of Bitcoin. The total supply of BitGrin (XGB) tokens is limited to 21 million. Furthermore, it has the same halvening schedule as BTC.

Every four years, the BitGrin mining rewards are reduced to half i.e. Currently it is 4.5 coins per block, and then 2.25 after halving, and so on. The next halvening block is 2,102,400. The block time for XGB tokens is around 60 seconds.

Being a store-of-value cryptocurrency, BitGrin also offers economic incentives to folks who hold their tokens with halvenings. Besides, to keep the platform up and running in a healthy state always, it has introduced a developer fee instead of relying on donations.

BitGrin plans to have a simple and intuitive interface for an average user who can simply trade his/her XGB coins with the tap of a phone.

On the other hand, the BitGrin protocol addresses the most critical issue of scalability. For public blockchains like Bitcoin and Ethereum, each operating node has to store the entire blockchain. Now the Bitcoin blockchain is 240 GB and the Ethereum blockchain is 1TB.

BitGrin promises to put its entire blockchain info within 1GB. Thus, a user can run an entire full node just through his/her smartphone. The BitGrin protocol compresses old transactions and even consider removing them. This makes the BitGrin blockchain much smaller than other traditional blockchain networks.