The Chinese mining company Bitmain does not get much information out. According to CNBC, Bernstein analysts have found that last year Bitmain may have earned as much profit as chip maker Nvidia. The estimates amount to 3 to 4 billion dollars profit. This is said to have been achieved mainly through the sale of ASIC Miners and the operation of mining pools and cloud mining services.

For the estimates, the Bernstein analysts expect a gross margin of 75 percent and an operating margin of 65 percent. As a result, they calculate a gain of $ 3-4 billion in 2017. The graphics processor and chip maker Nvidia, which also benefited from the cryptocurrency boom last year, was able to post “only” $ 3 billion in profits over the same period.

Unlike the company Nvida, which was founded 25 years ago, Bitmain already has a similar annual profit after just over 4 years. Bitmain was founded in 2013 by Jihan Wu and Micree Zhan.

With the foundation of Bitmain, a process began that turned Bitcoin mining into a professional business. Bitmain developed application-specific mining hardware, ASICs, which were able to mine Bitcoin 50 times faster than ordinary graphics cards. Hobby miners were thus displaced and replaced by the professional mining business.

Thanks to the de facto monopolization of the ASIC production and the strong influence on the mining pool market, the revenues of Bitcoin giant Bitmain have long been regarded as very large. Exact numbers have not been known yet. The Bernstein analysts not only examined how much bitmain generated in annual profit, but also how the income generated.

The sources of revenue of Bitmain

Analysts estimate that most of the revenue was generated through the sale of miners and their own mining. On the other hand, the usage fees for the mining pools and revenue from the cloud mining services should play a minor role.

In the following chart, the Bernstein analysts have presented the Bitcoin “mining supply chain”. The gray fields are the sources of revenue of Bitmain: 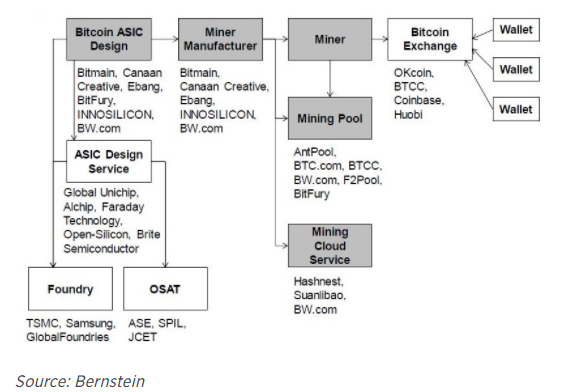 The research also found that Bitmain is smartly adjusting the price of its mining hardware. As the Bitcoin price rises, so too are the prices that customers had to pay for a miner (up to $ 5,000), with the same cost of production. As the devices are always payable in Bitcoin, Bitcoin’s rise in price has probably also played an important role in the huge annual profit.

A big source of income for Bitmain should be various mining pools. These include AntPool, BTC.com, BTCC, BW.com, F2Pool and BitFury. These provide more than 50 percent of the total mining power of the Bitcoin network. Not even the third largest mining pool ViaBTC is considered, which should also be very close to Bitmain.

Although neither Jihan Wu nor Micree Zhan appeared in Forbes’ first Crypto Rich List, it seems likely that they are both candidates for the list.

Despite the fact that Bitmain is highly controversial in the Bitcoin and Crypto community because of its de facto centralization and monopolization, Bitmain has been able to steadily increase its profits. In order to consolidate and expand its market position, Bitmain has already taken strategic steps, according to Bernstein.

So last year subsidiaries were founded in Israel, Canada and Switzerland. In addition, Bitmain aims to expand its business to other crypto currencies, such as Siacoin.