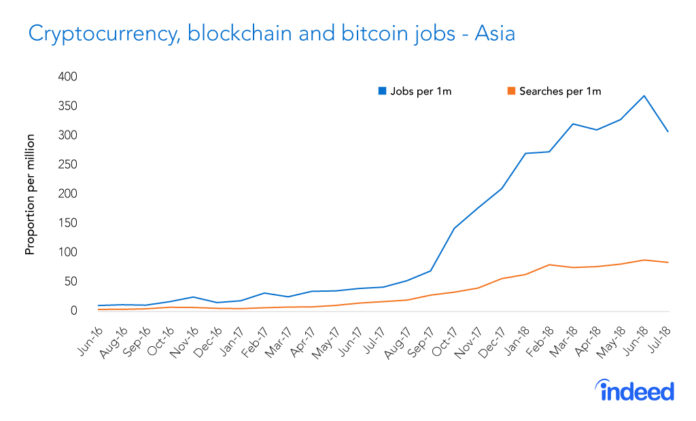 Despite a downtrending crypto market, CNBC reports that blockchain and cryptocurrency jobs are growing in Asia.

Recruitment firm Robert Walters told CNBC that the company has seen a 50 percent increase in the number of roles related to blockchain or cryptocurrencies in Asia since 2017. The firm reports that developers with Python language skills are among the most highly sought after employees in the field.

In addition, a noticeably growing number of blockchain jobs are being posted on LinkedIn by leading tech corporations and cryptocurrency exchanges like IBM and Binance. CNBC points out that the demand for blockchain professionals, in conjunction with the relative youth of blockchain industry, is leading professionals from traditional backgrounds to enter into the space from other industries.

Suggested Reading : Click here to learn why Binance is one of our picks for the best cryptocurrency exchanges.

“We hardly ever hire from inside of crypto because most people inside of crypto are very inexperienced. You have very, very few people who are experienced who get into the crypto industry,” said Julian Hosp, co-founder of Singapore-based crypto wallet and card start-up TenX.

Job search engine Indeed reports that an increasing number of would-be employees are expressing high levels of interest in blockchain roles, particularly in Asian markets. However, John Mullally, director of financial services at Robert Walters in Hong Kong says, “Not many people have the actual skill sets required for developer roles.”

Julian Hosp argues that much of the interest in employees seeking crypto and blockchain jobs depends on price trends in the market.

“If crypto is doing well, if people are making money in crypto, we get huge inbound from people because they feel like, ‘I need to jump on this wave,’” Hosp told CNBC.

“And then when you see crypto going down — and we saw this at the very beginning [of this year] and we’re seeing this right now — then we see that immediately the demand of people, they’re like, ‘Oh no, this is a dying industry, I shouldn’t go in there.’ So it’s completely emotional,” he said.

However, data from Indeed has shown a consistent upward trend for blockchain jobs and searches on its platform since 2016. Even though the number of available jobs has gone down since the crypto crash in January, the number of searches for blockchain positions has stayed steady through the bear market.

“The situation in Asia seems to mirror the U.S. in that bitcoin [job search] trends are much more volatile (and related to price volatility) and resulting media coverage while blockchain and cryptocurrency searches have seen a more consistent upwards trajectory,” an Indeed spokeswoman said.

CNBC reports a growing number of traditional finance professionals are looking to make a move into crypto. Justin Chow, Asia head of business development at Cumberland (the cryptocurrency division of proprietary trading company DRW), reports that most of Cumberland’s employees come from trading or capital market backgrounds. Cumberland has encountered an unusual phenomena of increased interest in blockchain positions, despite Bitcoin’s price down-trending for nearly all of this year.

“The lag effect between the present pick-up in interest and the peak in bitcoin prices in December was probably because finance professionals didn’t want to immediately drop their entire careers based solely on last year’s surge in prices,” said Chow.

“It’s maybe after February, we suddenly see a lot of influx of talent from traditional venture capital funds … and investment banks in China. It could be said the Asian or the Chinese talent are a little slower than their European or American counterparts to come into this field.”

Despite China’s strict ban on cryptocurrency, the country as a whole has remained enthusiastic about blockchain. Zhu attributes to China’s capital market for the growing number of blockchain professionals:

“It’s this predicament of the capital market here that leads to more and more people wanting to try something out in the crypto space. You have a much harder time trying to close deals and making money in the capital market for the last several years, that caused people to think about, ‘Where (can I) actually close deals, (where can I) actually help companies to get money, to get liquidity and the money they need to grow their business?’”

Cryptocurrency futures and options trading service Deribit has launched a new platform that will ensure cheaper and speedier transactions. Deribit...