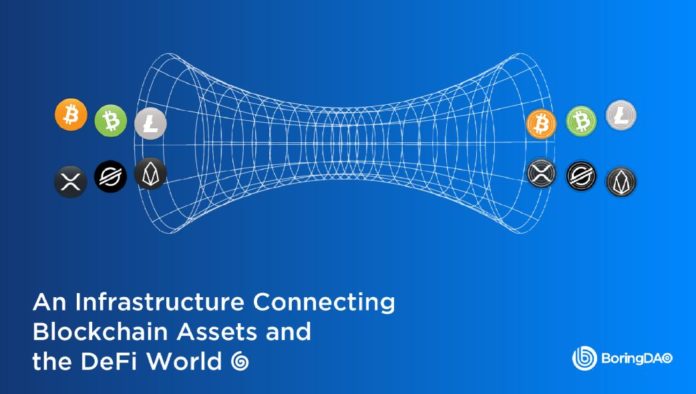 As you may have known, DeFi on Ethereum has become more popular than ever.

However, the Ethereum-led DeFi ecosystem is not welcoming to all token holders, especially when it comes to those who hold major crypto assets such as BTC/LTC/DASH/ZEC.

Too much non-ERC20 assets are left out of the DeFi world, limiting the total value of crypto to be utilized for lending and yield farming purposes within Ethereum ‘s DeFi ecosystem. Taking YFI as a typical example, they provide great product such as Vaults and Insurance but only for assets on Ethereum.

With only 0.6% of all bitcoin on Ethereum and DeFi booming, the potential for decentralized bridges between chains is hard to ignore. Holder of these non-ERC20 assets are desperate to transfer their asset to the Ethereum DeFi network. Upon that, BoringDAO launched.

What is BoringDAO? It is a gateway between blockchains. For example, your Bitcoin can enter the Ethereum network in a very secure and decentralized form.

Cross-chain is supposed to be boring; users don’t need to understand its principle, they just need to use it as a black box. But the “black box” brings uncertainty. If you don’t know how it works, you will always worry about whether your wrapped Bitcoin asset is safe.

The principle of BoringDAO is very simple and easy to understand.

Let’s take transition of BTC to bBTC as an example. It has three steps:

1. Alice binds her ETH and BTC addresses with smart contracts.

2. Alice transfers some bitcoins from her BTC address to the BoringDAO bBTC Tunnel.

And interestingly, your bBTC will automatically get a 200% over-collateralization!

In BoringDAO, the Double-Pledge mechanism adds additional protection to the value of bBTC.

In other words, each bToken is backed by 200%+ assets bToken (= 100% equivalent original crypto assets + about 100% equivalent BOR/other Tunnel pledge). Even if there is a black swan event (e.g. the underlying BTC is stolen; Although the probability is super low, it has to take it into consideration), the liquidation process can still protect the native BTC.

Here is how BoringDAO works:

Where did Alice’s Bitcoin actually go?

It went to BoringDAO’s Multi-Sig wallet managed by 3 separate institution signers. Gradually, the total number of eligible private-key holders will expand to 5, 7, 21, and more in the future, making the BoringDAO system more trustworthy and reliable as adoption picks up.

Where does the 200% over-pledge come from?

The BOR community will work together to build a tunnel: by pledging ERC-20 assets in a particular Tunnel, such as BOR, ETH, DAI, etc. one can become partial owner of the tunnel. In each tunnel, 70% of minting fees and 50% of burning fees will be distributed, in the form of BOR, to all owners of the tunnel as reward. Moreover, pledgers can get more rewards by “Boring Farm”, which will be further elaborated below.

The total minting capacity of a tunnel is decided by the total value of tokens pledged in that particular Tunnel. For example, if a total of 100 million USDT of various ERC-20 digital assets (such as BOR and ETH) are pledged in the Tunnel, then this tunnel allows approximately 10,000 bBTC to be minted at the same time, assuming the price of Bitcoin is at 10,000 USD.

Do pledgers have to worry about liquidation?

The answer is No! liquidation will only happen when the underlying assets are compromised (in the case of a black swan event). When the tunnel pledge ratio is under 100%, the system will automatically readjust the total minting capacity of the Tunnel and halt minting, rather than liquidation. Even in such circumstances, all previous minted b-Token could be redeemed as usual.

In the future, the pledge ratio would be decided through community governance, from 100% to 75% or even lower. To be clear, a lower pledge ratio would affect neither the value of bToken (bBTC, in this case) nor the underlying security of the tunnel, because all BTC minted through the tunnel will be deposited in the multi-signature wallet, which insures the redemption of bBTC back to BTC.

So, what is the use of bBTC?

You can use bBTC to build any application you want, since bBTC runs on Ethereum network, making it a programmable cryptocurrency asset. Moreover, you could trade bBTC on decentralized exchanges such as Uniswap, Balancer and DODO.

Meanwhile, in the initial stage, BoringDAO will launch “Boring Farm”, which allows tunnel users to stake their minted bToken to earn BOR. In the future, when more users mint bBTC as tunnel’s adoption pick up, bBTC and other bToken assets could be further integrated into other important DeFi infrastructures such as MakerDAO, Compound and Curve.

Another interesting part about this project is that BOR holders can earn BOR through what we call the “mint-minting” process: although a 0.2% minting fee will be charged for each bToken being minted, minters will be “compensated”, in the form of BOR, with double the value of the total minting fee. However, to prevent meaningless volume washing, a 0.2% burning fee also will also be charged when redeeming BTC. The burning fee will be charged in BOR, with a part of the fee to be burned to encourage deflation).

BOR is capped at 200,000 tokens, of which approximately 80% will be allocated to the community through mint-mining, yield-farming and infrastructure.

Last question, how scalable is BoringDAO? Although BoringDAO is initially designed to integrate non-ERC-20 assets into the Ethereum ecosystem, it could also support minting on other crypto ecosystems, if needed.

Now, we sincerely hope that you have already understood this “boring” idea and “boring” vision. All in all, allowing the frictionless free-flow of major crypto assets into other crypto ecosystem is why we believe BoringDAO will eventually reshape the current cryptocurrency & DeFi landscape.