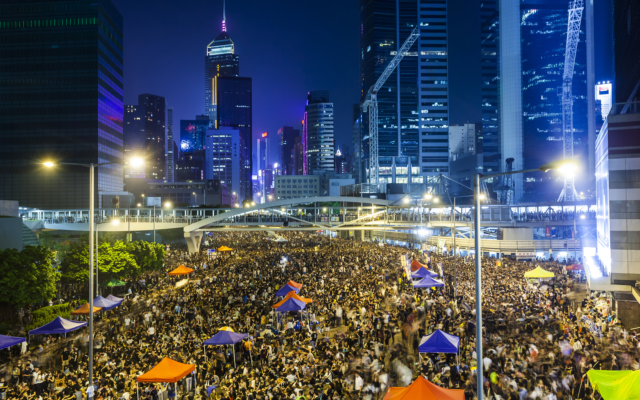 Hong Kong is waking up to the benefits of financial privacy using cash, reports claim, as protesters seek to hide their movements and identity.

According to various reports surfacing on social media this week, participants in the ongoing rallies against the Hong Kong government are choosing to abandon payment methods which could track them.

A planned law dubbed the ‘Extradition Bill’ wants to make it possible to send suspects to mainland China. This, the protesters say, would open up Hong Kong’s legal system to manipulation and for Beijing.

Fresh from the 2014 ‘Umbrella Movement’ pro-democracy events, citizens are now all too aware of the need to protect their identity in the face of a government with an increasing reputation for surveillance and intrusion.

Hui was at a metro station in Hong Kong and noticed long lines at ticket machines “stretching back 10+ meters.”

There is usually never a line at the train ticketing machines. Judging from an overheard convo, it appears that people are reluctant to use their rechargeable Octopus cards for fear of leaving a paper trail of them having been present at the protest. pic.twitter.com/s1rsgSnCqL

The machines are normally empty, she said, as passengers use rechargeable smartcards which can be topped up in various ways. Now, however, with 2014 still in their minds, they appreciate the need for privacy when it comes to money.

“She said that this ticket-buying (wasn’t) as prevalent during the 2014 Umbrella Movement. Five years on, however, people are more wary & aware,” Hui summarized on Twitter.

A Perfect Storm For Bitcoin?

As Bitcoinist has reported, multiple governments have declared a ‘war on cash’ as part of efforts to standardize their countries’ economies. While authorities say such measures reduce crime, opponents argue it leaves the door open to full control of the financial system and opportune intrusion into citizens’ financial lives for any purpose.

A recent case in point is India, where the central bank is actively pursuing a digitization plan which has already seen shambolic currency reform and widespread backlash from consumers.

Hong Kong, however, provides a rare example of broad public understanding of the benefits of cash and how states could use money to persecute.

“This raises a lot of interesting questions about cash vs. cashless societies, and how in times of protest people may drastically adjust their usual economic behavior,” Hui added.

The protests predictably shook up the Hong Kong dollar (HKD), which has gained against the USD in recent days due to a liquidity squeeze sending investors long, Bloomberg reports.

The government has in fact spent $2.8 billion since March maintaining HKD’s peg with the USD, with concerns about financial policy compounded by the political events.

“We don’t trust China. Rules and laws can be arbitrarily applied and we can see this in Hong Kong already,” a protester told UK publication The Guardian, adding that should the Extradition Bill pass, he would immediately convert his savings to USD.

Bitcoin trade volumes meanwhile have shown a modest uptick on P2P platform Localbitcoins over the past several weeks.

A local Bitcoin company has joined the protests and given all its employees the day off. #ExtraditionBill pic.twitter.com/AFWUuDDFWg

It should be noted that Hong Kong has the largest number of Bitcoin ATMs in Asia, while the local industry appears naturally supportive of the protests. One company, a Twitter user spotted, has closed in order to allow employees to march.

What do you think about Hong Kong embracing cash? Let us know in the comments below!