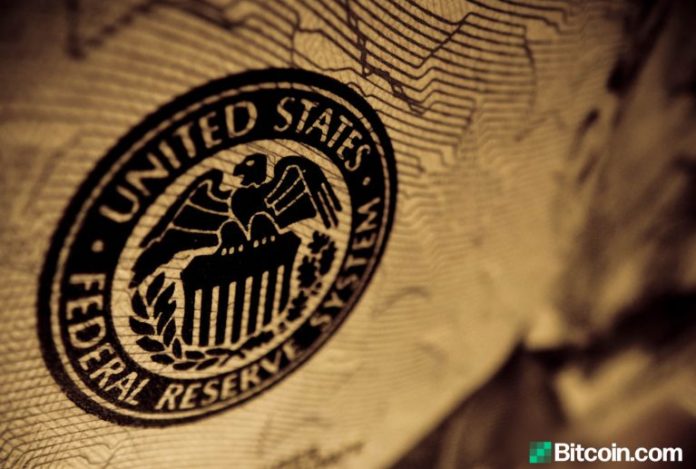 For a while now, central banks like the Federal Reserve have been participating in quantitative easing (QE) practices, despite the fact they don’t like to call it QE. Following the massive dollar injections, a recent report from the wealth insights provider Wealth-x details the number of wealthy people in the world spiked in 2019. The study cites the Federal Reserve’s stimulus is a direct effect of the rich getting richer, as the funds go directly to private banks and likely trickle down to the bubbling U.S. stock market.

Eight years after the Occupy Wall Street movement fizzled into oblivion, the world’s central banks are printing fiat again, making the 1% grow richer. A recently published Wealth-x study shows that in 2019, the number of rich people getting richer surged as the “distinctive tier of wealth” expanded a great deal. News.Bitcoin.com’s “Money and Democracy” two-part series explain how the wealthiest families in the world (bankers) have colluded for hundreds of years in order to maintain the status quo.

It’s not like the economy’s manipulators used the free market to become the giants they are today; financial incumbents use force provided by the nation-states politicians and cronyism to manipulate the world’s markets. Wealth-x researched very high net worth (VHNW) individuals and showed that they follow the same patterns as their wealthier counterparts. VHNW is people who own between $5-30 million+ and their number jumped 10% in 2019.

The study also notes that in 2018, there were 2.39 million people in the world who made the criteria but in 2019 the number had risen to 2.67 million. The growth in wealth stemmed from the bubbling U.S. stock market in 2019, which saw record-breaking highs. The Wealth-x study attributes the stock market spikes to the Federal Reserve’s “monetary stimulus.” And because private banks are allowed to feed on the dollar injections, the S&P 500 rose 28.9% last year and hasn’t seen a spike like that in six years. Similarly, Nasdaq had the best performance in six years and the Dow saw record numbers in 2019 as well. After the report from Wealth-x published, Northman Trader author Sven Henrich sarcastically congratulated the Federal Reserve for the achievement. The financial analyst Henrich tweeted:

Central banks have become the primary driver of wealth inequality. And they refuse to admit the self-evident. They are the driver of excess that primarily benefits the few. Central banking is socialism for the top 1%.

Henrich and many others have been critical of central banks like the Federal Reserve because they believe the funds only go to private hands and create a foundation for the current 1%. Henrich even helped prove the point in a further tweet, when he said: “Last week […] Fed: ‘We’ll reduce repo next week,’ [Apple] AAPL: ‘We’ll miss revenue,’ Fed: ‘Here’s $78.5B in repo.’”

”Global markets at all-time highs and everybody cries for more stimulus,” Henrich added. Central banks and smaller financial institutions have also been accused of colluding for years and they have conspired with politicians.

Former U.S. President Barack Obama recently bragged about his efforts to promote more cash injections when he signed the Recovery Act. However, the comments stemming from Obama’s tweet detail that ordinary citizens, who are not part of the cartel of bankers and conniving groups of bureaucrats, didn’t really get much help from the Recovery Act. In actuality, the average U.S. citizen got to foot the bill.

“Your stimulus cost us (taxpayers) $831 billion for one of the slowest recoveries in history while doubling the national debt,” an individual said in response to Obama’s tweet. “You would be the worst president in history if the Federal Reserve didn’t bail out your pathetic legacy — Try again.”

The current American President, Donald Trump, has been no different and has tweeted on many occasions that he would like to see more monetary easing and the slashing of interest rates. “The Federal Reserve should get our interest rates down to zero, or less, and we should then start to refinance our debt,” Trump tweeted in September. Furthermore, the Wealth-x report highlights that the wealthiest individuals’ gains in 2019 were “not evenly distributed” worldwide. Throughout the year, global debt hit a record high in 2019 and central banks like the Federal Reserve have been accused of fueling one of the biggest heists in history. Wealth-x says the U.S. led the way as far as the number of VHNW individuals goes and their net worth rose by 15%. There was some growth in Asia and Africa, but Europe saw the collective net worth drop to below-average growth. “Regions performed considerably better than the Middle East, which saw negligible increases, and Latin America and the Caribbean, where wealth creation stagnated,” Wealth-x researchers noted.

What do you think about central banks like the Federal Reserve injecting capital into the hands of private banks and their friends? Do you think the Fed, current financial incumbents, and politicians collude today and have ruined global markets? Do you think cryptocurrencies like bitcoin can help? Let us know your thoughts on this topic in the comments section below.

The post ‘Central Banking Is Socialism for the 1%’ – Report Cites Wealth Inequality Driven by Stimulus appeared first on Bitcoin News.