China has long been a dominant player on the global Bitcoin map. By 2016 over 90% of Bitcoin’s global trading volume took place there. Moreover, mining operations were in abundance due to China’s cheap electricity. It is no coincidence that Bitmain, the world’s largest Bitcoin mining equipment manufacturer, is a Chinese company.

At the beginning of September, China issued a ban on Initial Coin Offerings (ICOs), an unregulated cryptocurrency-based crowdfunding practice that attract capital for new startup companies and projects. This regulatory act sent shock waves through the global Bitcoin community.

As part of the ban, authorities requested that ICO participants be refunded for their contributions. Moreover, the People’s Bank of China and China’s central bank demanded that Bitcoin exchanges be closed.

The Giga Watt Project’s founder and CEO, Dave Carlson, has little concern over China’s ICO ban: “I don’t see the ban having a large impact on Bitcoin. I’m not convinced that ICOs are inherently linked to the ecosystem.”

While Carlson believes that Chinese authorities still see value in the rapid growth of cryptocurrency, he thinks that this value has been trumped by their will for regulatory control. However, China’s regulatory developments haven’t affected the the Giga Watt Project’s strategic direction. “Because there are many other blockchain processing opportunities outside of Bitcoin, it’s not even a blip on our radar,” noted Carlson. He added, “Personally, I predict that ICOs will return to China, but only on their terms.”

In the meantime, Carlson will continue to lead the Giga Watt Project’s aim of building a mining network unlike anything before it. Currently, the project has three operating units, with 2.25 megawatts ready for tokenization. In addition, three of Giga Watt’s state-of-the-art Giga Pods are now complete. Access to Giga Watt services will be allocated to token holders on a first come, first served basis.

A key takeaway in Carlson’s response to China’s ICO ban is what he envisions for the future. Bitcoin mining will likely pale in comparison to new forms of blockchain-based computing methods, and Carlson sees this as one way the industry will mature and stabilize. “As Bitcoin’s value rises, the ability for miners to drive difficulty by adding hashpower becomes harder and harder as much more computing is required.” In this matured industry, Carlson anticipates that Bitcoin’s blockchain will be leveraged, pointing to RSK’s smart contract as an example. “I am hopeful that blockchain-based computing will boost revenue and provide new opportunities.” 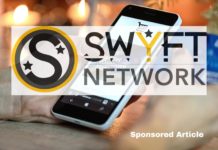 The Last Day of LAT Token Sale. Don’t Miss the Chance to Join

Just 1 day is left until the end of LAT Token Sale – one of the biggest ICOs of this...