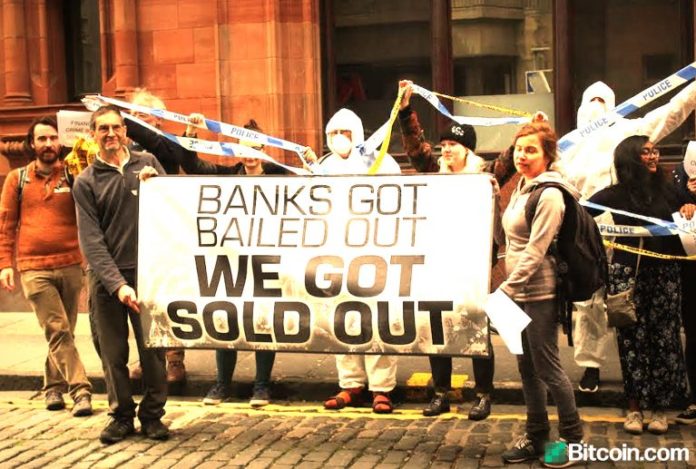 In 2019, cryptocurrency and blockchain businesses saw more regulation than any year prior. G20 finance ministers, central bank governors, and regulators cracked down hard on the bitcoin industry. However, during the covid-19 scare, U.S. authorities have been dropping regulations on a whim, making it easier on the financial sector. On March 22, the Federal Reserve revealed it would work with a group of regulatory agencies in order to give banks more leeway when it comes to modifying loan terms.

What Are Regulations Good For? Absolutely Nothing

The overlords of the U.S. banking system have been doing a lot of unusual things lately to cope with a looming recession brought on by the coronavirus outbreak and forced economic shutdown. Nearly every day, President Donald Trump and the Federal Reserve have been making new announcements and radical changes.

On Sunday, the Fed alongside a slew of other U.S. regulators like the Office of the Comptroller of the Currency have made it so financial institutions can make changes for debtors without oversight. The Fed revealed its decision would allow banks to reduce interest rates, extend loan times, modify loan terms, provide fee waivers, and offer payment deferrals whenever they feel it is necessary. In a heavily regulated environment prior to the covid-19 outbreak, financiers couldn’t do these things without setting off regulatory red flags or receiving massive penalties.

Right now, all of the so-called “much needed” financial regulations are being torn down like the Berlin Wall. The recent move to drop regulations follows Fed chair Jerome Powell’s decision to slash benchmark interest rates to 0%, inject trillions into the hands of private banks, and eliminate all reserve requirements for banks. U.S. financial institutions can not only modify loan terms as they please, but also loan as much as they want without any need for worrying about FDIC insured deposits. Just a month ago, however, financial regulations were quite abundant and U.S. officials from the Fed to the Treasury took aim at bitcoin businesses.

On February 11, Minneapolis Federal Reserve President Neel Kashkari said that the cryptoconomy and bitcoin are “like a giant garbage dumpster.” Later that week, Steven Mnuchin the Treasury Secretary told the Senate Finance Committee that new regulations focused primarily on cryptocurrencies were rolling out soon. Not to mention central bank governors worldwide, G20 finance ministers and the Financial Action Task Force that have regulatory guns aimed at cryptocurrency businesses and exchanges.

Amid the economic calamity, however, politicians and regulators are quickly changing their tune. A number of Austrian-schooled economists over the years have explained in great detail why regulations stifle efficiency. Regulations always add hidden costs because compliance comes with complex hurdles and mandates. More expenses are handed down to citizens, as regulations make Americans pay for all types of redundant operations. Government guidelines against free markets make consumers deal with dull and non-innovative products because regulations place various barriers to entry. Legislative guidelines enforced by the arbitrary whims of bureaucratic leaders have devastated privacy and property rights. But since the start of the failing monetary system, politicians have created a framework that is riddled with manipulation and monopolies, and lawmakers know infrastructure would collapse if they didn’t remove regulations during the covid-19 outbreak.

Hundreds of Federal Regulations Removed Throughout a Variety of Industries

The last two weeks of economic mayhem have caused people to question why we need regulations and all this KYC/AML crap at all. Whimsical regulatory rules have violated our financial privacy and it has made the economy inefficient. Parasitic politicians and central bank governors do understand that laissez-faire is the most efficient monetary attitude. Yet if they removed these legislative guidelines, government entities wouldn’t be able to create revenue from the backs of entrepreneurs and the working class.

Sunday evening’s decision by the Fed is just a small fraction of the regulatory requirements that have been removed since the covid-19 outbreak started. On March 22, free-market advocate and Openbazaar developer Chris Pacia tweeted a list of regulations the U.S. government has dropped since the crisis.

Pacia’s tweet further underlined that so far the American regime has released non-violent offenders from prison, they have allowed foreign doctors to practice medicine in the U.S., registered nurses can travel state to state without a license now, police officers have suspended arresting people for victimless crimes in a few cities, occupational licensing has been suspended, FDA regulations for medical products waived, and alcohol for the first time can be delivered to your home in some states.

So why do Americans need regulations at all? Especially when we know and data clearly shows that regulations only benefit a certain group (specifically the oligarchs). Why did they aim all the government guns and regulatory policy at free-market solutions like bitcoin during the last few years? The reason they attacked the cryptoconomy is because digital currencies like bitcoin represent true economic freedom and permissionless, financial prosperity.

Right now megabanks and monopolies created by the U.S. government are being bailed out. At the same time, American bureaucrats want ordinary citizens to foot the bill with higher taxes, austerity measures, hidden costs, and rabid inflation.

What do you think about the hundreds of regulations waived because of the covid-19 outbreak? Let us know in the comments below.

Huobi and OKEx have announced that they will be compensating traders who lost funds due to system failure during the...