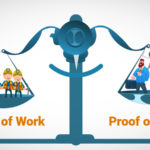 If you have delved into the world of cryptocurrencies, you most likely have heard of these two terms: Proof of Work or Proof of Stake.

Proof of Work and Proof of Stake are the most common algorithms which are used in establishing the consensus within digital currencies, such as Bitcoin and Ethereum.

In today’s article we will be exploring what are these algorithms, their differences and how do they apply to their network.

What Is Proof Of Work (PoW)?

Proof of Work is a computer algorithm that is used in cryptocurrencies to reach a decentralized agreement when adding a new block to the blockchain. The concept first appeared in 1993, but the term was coined in 1999. The examples of cryptos that use PoW are Bitcoin, Ethereum, and Litecoin.

Miners verify transactions which are then added to a block. This process is called mining. But, in order to include the transaction in the next block, the miner needs to know the cryptographic hash value of the last recorded block and its status.

In order to find the hash of the last block, brute computing power is required to find the right hash by changing the block’s header. The miners receive a fraction of the coin they are mining, which makes the process competitive. The miner that solves this mathematical puzzle is the one that gets the entire block reward.

However, this mining process is time-consuming and requires a lot of computational power.

What Is Proof of Stake (PoS)?

Proof of Stake is a consensus model which was proposed by a Bitcointalk forum user in 2012, due to PoW mining being too resource intensive.

Several studies have shown that running and maintaining mining rigs for Bitcoin (a PoW-based crypto) can cost as much as the energy required to power millions of homes.

Unlike PoW, PoS is much more eco-friendly. This consensus model bases its rewards on the number of coins you have stored on the blockchain. A higher “stake” means that there is a lower chance of someone breaching the system, as they had more to lose.

PoS does not mine blocks, instead, they are forged or minted. The participants who have a significant stake in the system are selected based on factors, such as randomized block selection, coin age-based selection, masternodes, etc.

PoS cryptocurrencies are usually all pre-mined so that users can have coins to stake. This results in a total supply fixed from the start. As there is no mining, the only incentive is the transaction fee that comes with that block.

Proof of Work vs Proof of Stake

Proof of Stake systems are more cost-efficient and eco-friendly, compared to Proof of Work systems. A PoW system requires more computational power and, as a result, it has a high energy consumption.

Due to the fact that Proof of Stake systems have no mining, there is no need for high levels of processing power. A network using Proof of Stake will need only a small fraction of the energy in order to be operational.

As users will not have to spend so much on energy, they have more

accessibility to become validator nodes, regardless of their role in the community, while mining is becoming more dominated by large-scale operations.

Also, investors will save money by not having to invest in expensive ASICs which have to be periodically updated or replaced.

Proof of Stake is an algorithm which was developed recently, compared to Proof of Work, which means that it is not as broadly adopted. This means that PoS has not been used as much as PoW, i.e. that several potential security risks might not have been found.

Repetitive forks will lead to instability in the blockchain. A fork in a Proof of Work network means that miners have to decide if they will have to keep on supporting the original blockchain or switch to the new one resulted from the fork. To support both blockchains, a miner would have to use the computing energy for the two. Therefore, this system discourages constant forking as it is unfavorable from an economic perspective.

Also, a DDoS attack by controlling 51% of the total computing power is too expensive to occur in PoW system, making the blockchain very secure.

Proof of Stake is a system that does not discourage forking. When a fork occurs, crypto owners receive a duplicate copy of their stakes on the new blockchain. But if a validator signs off on both blockchains, they could be able to claim twice the amount of transactions fees as a reward, and double-spending could happen. This is known as the ‘nothing at stake’ problem. As validators are not required to increase their stake in order to confirm transactions on the forked version on the blockchain, there is no economic motivation to prevent them from taking advantage of this loophole.

A possible solution to the ‘nothing at stake’ problem is the implementation of a deposit that stays locked for a certain period.

A growing concern with PoW blockchains is that they can become centralized. Due to mining in Proof of Work systems, only large-scale operations will be able to handle the mining difficulty and thus, mine more blocks. This would put a majority of the supply of the coins in the control of these operations, instead of being spread out in the community.

Proof of Stake could offer a fairer system. A network user is able to make gains that are directly proportional to his or her investment. This means that if a user invests 10 times more into its stake, then he will get a reward of 10 times more. However, if miners in Proof of Work systems invest 10 more into hardware than others, they will actually gain more than 10 times the computational power. This increases the difficulty and makes it less profitable for individual miners to compete against large mining organizations.

While it does appear that PoS is the algorithm that poses more benefits, only in time we will know which is the best blockchain consensus protocol.

Cryptocurrency markets are booming this weekend and traders need adequate and timely information about prices and trends. Cryptowat.ch is an...