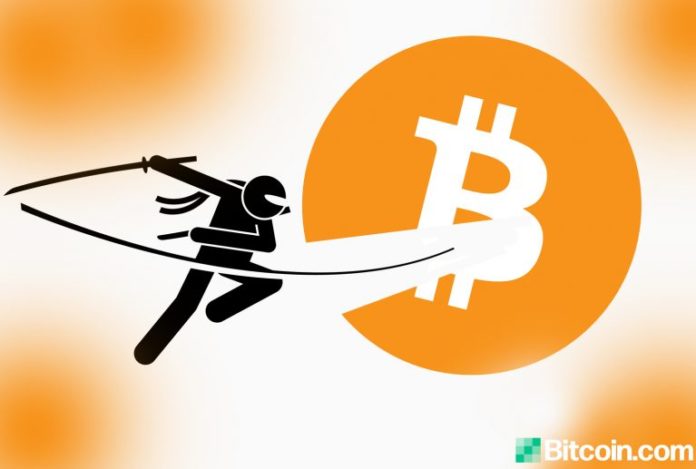 On or around May 13, the BTC network will see a block reward reduction as miners will go from getting 12.5 coins per block to 6.25 coins following the halving. The last time the protocol’s block reward halved was on July 9, 2016, and the global economy looked a whole lot different back then. This time around, while BTC miners see reward reductions the world’s financial system has been crumbling and the digital asset’s value is much lower than it was four weeks ago.

It’s kind of hard to believe that last month BTC was trading for much higher than it is today at $10,371 per coin on February 14. Then again it’s getting easier to believe anything is possible nowadays as the entire world is fractured by economic hardships from the covid-19 pandemic. Bitcoin is now trading for $6,600 and the network is set to see a block reward reduction from 12.5 BTC per block to only 6.25 BTC in 50 days. Give or take a week or so, the protocol has halved every four years starting in 2012. The last halving was in 2016 and the one expected after April is scheduled for May 13.

Besides the price lows right now, the ongoing economic uncertainty worldwide has cast a shadow on crypto markets in general and no one’s quite sure what will happen next. For the first time since Bitcoin’s birth, the cryptocurrency is caught amidst a financial meltdown worldwide and many people believe the technology was made for this event. In the midst of the economic calamity, and no matter what the price is come May 13th, miners will get their revenues chopped in half instantly.

#Bitcoin leveraged longs are liquidated, system cleared. Traditional system did not clear because of circuit breakers, bail outs, non 24/7: who knows how many blow ups are out there?! Markets show current $5trillionUSD promised QE is not enough. Bitcoin halving in May. #DoTheMath pic.twitter.com/tdtvLBtwNV

BTC miners will face other obstacles as well because Satoshi Nakamoto probably never accounted for two other SHA256 networks. In 2020 there are three high-profile blockchains that share the same SHA256 algorithm and some mining operations process blocks on all three networks. An even larger number of mining pools can be seen switching hashrate from chain to chain in hopes of gathering better profits. Roughly a month before BTC’s halving, bitcoin cash (BCH) and bitcoinsv (BSV) will see block reward reductions as well. Bitcoin miners have been doing this for quite some time and there have been various occasions where it’s more profitable to mine BCH than BTC or vice versa. Because miners follow these windows of opportunity to bounce around chain to chain, speculators believe profit fluctuations will be more drastic as each network halves.

Further, while a good number of BTC supporters are optimistic about the bitcoin halving, there are those who think it might not be a big deal. Longtime analyst and trader Peter Brandt who has 334K followers on Twitter recently said that the halving might be overemphasized. Brandt tweeted that the bitcoin halving was “grossly overrated.” “The daily trading volume of BTC = the REAL supply of BTC,” Brandt stressed. “The daily reduction of mined bitcoins (NEW supply) equals approx 2/100th of 1% of REAL supply.”

Bitcoin is a ticking time-bomb 💣

When people told crypto pundit and trader Tone Vays that economic conditions would probably bolster BTC, Vays seemed to think the opposite. “Actually the halving being so close is a bad thing, if this Zombie Apocalypse continues into the summer,” Vays replied. “BTC might still be crashing as the halving just crushes the miners.” The popular crypto trader Donalt’s view of the situation seemed grim as well. “So miners get half the amount of Bitcoin and can only sell it for half the price in a few week’s time,” the trader tweeted. “Halving sounds like a sh** deal for them, not gonna lie.”

I gotta say, not many better ways to make the point as #Bitcoin going through its halving right as the world’s fiat currencies go through a doubling.

The first two halvings were followed by increased BTC values and security increased a great deal as well. Since the 2016 halving, BTC miners’ combined hashrate processed at the time was just above one exahash per second (EH/s). In the four years since, miners have captured an all-time hashrate high of around 136 EH/s on February 20, 2020, although since the price slid during the last two weeks, the overall hashrate has lost 26%, dropping to 100 EH/s.

While many BTC supporters believe that the chain is secure, a few skeptics think security will drop after May 13. The CEO of AVA Labs and Cornell Professor Emin Gün Sirer thinks that the next few reward reductions will diminish BTC’s overall security. “As the amount of awards given to the miners dwindles down, the security of the network will drop,” Gün Sirer said. “If the security drops sufficiently, we may even see massive double-spend attacks targeting exchanges. This would, in turn, trigger exchanges to extend their confirmation times.” The professor added:

At some point, the attackers might have access to so much hashpower that no reasonable number of confirmations may be sufficient to guarantee security.

Miners Must Rise Above the Tide to Remain Profitable

No one quite knows what will happen during the next BTC halving but we do know there’s a lot of different factors in 2020 such as the price after the halving, the global economy, hashrate and difficulty, and the number of transactions and fees as well. James Todaro, head of research at Tradeblock, has tweeted that miner costs need to surge from $7K per BTC to between $12,000 and $15,000 following the halving event. “Following the Bitcoin halving, miners’ estimated breakeven costs will rise from ~$7,000 today to ~$12,000–15,000 per BTC after. I would not be surprised if we see Bitcoin prices rise above these levels so that miners remain profitable,” Todaro wrote.

What do you think about BTC’s upcoming block reward reduction? Let us know in the comments section.

Bitcoin price has jumped over 15% during the last 24 hours, currently trading above $6,700. Here are three main reasons...