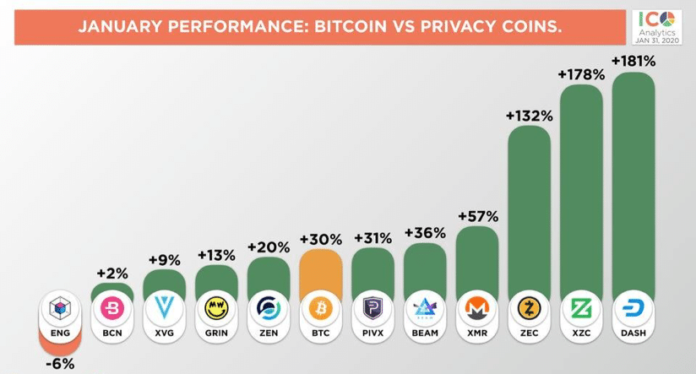 In the early stages of Bitcoin development, most cryptocurrency enthusiasts tended to think that the original digital currency offered them complete anonymity and they could make purchases with this type of “new money” without revealing their identities. The level of Bitcoin’s privacy was often compared to that of Swiss bank clients. However, that was far from the case.

Is Bitcoin anonymous? Bitcoin transactions are recorded in the ledger and broadcast publicly to everyone with access to the blockchain. This means, your money transfers are vulnerable to being traced, and, for hackers or governmental structures, the way to your wallet address can be as evident as a trail of wet footprints leading to a bathroom. Remember Ross Ulbricht, the notorious creator of the Silk Road black market?

Authorities tracked his transactions and were able to identify and catch him while he was sitting with his computer at one of the libraries in San Francisco. So, your financial activity is actually an open book, and Bitcoin should be thought of as more of a pseudonymous asset than anonymous.

This is why the crypto market saw the phenomenon of privacy-focused protocols gain momentum alongside various coin-mixing tools and services without public records linking transactions to wallets. In simple terms, privacy coins were designed to cover tracks after operating with cryptocurrencies, which made their usage very popular among crypto geeks bent on anonymity.

But recent news regarding Bitcoin’s potential upgrades aimed at improving its privacy seems to threaten the future of this class of digital assets, and may even move some to eliminate Monero, Dash, and ZCash out of their portfolios. To measure the possibility of such a scenario coming true, we need to look at where privacy coins stand now.

Overall excitement for cryptocurrency during the pandemic

Statistical data from ICO Analytics shows that prominent privacy coins, with DASH (see Dash vs. Bitcoin) leading the way, had outperformed Bitcoin as of January 31, as privacy became a bigger concern in the industry, most likely in response to the People’s Bank of China statement regarding their centralized digital yuan initiative. This was the first time in 18 months that privacy coins had outperformed Bitcoin in price gain, owing mostly to their lack of viable value propositions and the high regulatory scrutiny leveled at them.

The bullish sentiment kept gathering strength after Fed Chairman Jerome Powell’s testimony, in which he noted that privateness is essential for transactions with digital currencies and global crypto adoption: “A ledger where you know everybody’s payments is not something that would be particularly attractive in the context of the US.” The importance of the Fed chief’s stance was highlighted by one of the most famous crypto influencers, Anthony Pompliano, which in turn created hype in the community and led to a spike in privacy coin transactions. With the COVID-19 crisis, privacy has also become a new battlefield for combating the disease. Monero, ZCash and Dash all witnessed increased trading, while the latter managed to reach new highs and outperformed Bitcoin by over 60% compared to the beginning of the year. Moreover, Dash was among the assets that recovered quickly after the “Black Thursday” market collapse in March. Interestingly, the demand for this coin was caused in large part by Venezuelians, some of whom use it for daily shopping.

Notwithstanding such impressive gains, by the beginning of the second quarter of 2020 there was only one privacy coin outpacing Bitcoin. The coin in question is Monero (see Monero vs. Bitcoin guide), which has improved its performance by around 5%. Some experts think this sudden uptick was a result of several positive developments that were done to improve transaction execution and the way Monero works with privacy networks Tor and I2P. In addition, the cryptocurrency received a great deal of attention from well-known faces in the crypto industry like Coinbase’s CEO Brian Armstrong, who expressed his hope to see privacy coins among the main trends of 2020, and controversial antivirus software developer John McAfee, who named Monero as his cryptocurrency of choice in terms of privacy. Many traders sharing this view seemed to immediately flock to long-standing exchanges that also operate in accordance with anonymity ideals, making the XMR/USDT trading pair on HitBTC the most liquid in the market. With such a significant liquidity margin, it wouldn’t be a mistake to say that the exchange has one of the most conducive environments for trading privacy coins at fair prices, alongside its over 500 other assets.

Not everyone is bullish on privacy. Detractors of privacy coins emphasize their involvement in illegal transactions conducted on dark markets and insist this outweighs all the arguments made by privacy advocates. Most marketplaces existing on the dark web accept untraceable privacy, thereby skirting anti-money laundering and counter-terrorism financing requirements. Japanese and South Korean regulators are among those fighting hard against anonymous coins, even enforcing local exchanges to delist them.

For example, the Korbit exchange removed five privacy coins in May 2018, citing the South Korean government’s ban on anonymous cryptocurrency transactions. Later on, Tokyo-based CoinCheck stopped its support for several privacy coins, including Monero, Dash and ZCash, when half a million of dollars was stolen from the exchange, despite the fact that none of the cryptocurrencies was used for committing the crime.

Actually, the May report from the Rand Corporation revealed that the majority of illicit transactions (59%) on the darknet use Bitcoin, while the presence of privacy coins widely believed to be the “currencies for criminals” is far less prominent. And what is even more interesting is the recent announcement from Chainalysis detailing its support for Dash and ZCash. This means that now almost all of the transactions conducted with these two assets, which fancy themselves as anonymous and untraceable, can be easily tracked. It looks like this sudden move by the U.S.-based crypto analysis company will ease the task for law enforcement agencies and make privacy-focus coins practically useless.

Chainalysis stated that anonymous coins offer a fraction of increased privacy, but nothing close to total anonymity. The company found that only around 1% of transactions executed on the ZCash network can boast maximum privacy, even with enhanced encryption taken into account. As for Dash, that rate falls below 0.7%, which, from a technical point of view, places the privacy aspects of the coin on the same level as those of Bitcoin.

It’s noteworthy that almost two months earlier researchers from Carnegie Mellon University generated similar results through their test-trial of ZCash and Monero traceability. The figures are disappointing: 99.9% of ZEC transactions and 30% of XMR transactions can be easily tracked.

With all that in mind, Bitcoin’s increasing privacy poses an existential threat to anonymous cryptocurrencies that may eventually see less growth and community support, as the first-ever cryptocurrency still has many more resources and much more interest than any of the altcoins.

The prospects of the “Bitcoin vs privacy coins” rivalry

Of course, technologies benefiting Bitcoin’s privacy and efficiencies like the Taproot protocol and Schnorr signatures, enabling cooperative closes to look like regular transactions and remain completely hidden to people from the outside, might take away some of the edges from anonymous cryptocurrencies. Bitcoin Core developer Ryan Havar suggests that the wider BTC user base will be capable of making it more private than its privacy-focused competitors: “Simply put, there’s a lot more Bitcoin users, and use cases. So if you can ‘hide’ in the crowd of Bitcoin users, it’s a much bigger crowd than say ZCash.”

The situation for privacy coins is marred by the crackdown against them that is gaining momentum in different parts of the world. In March 2020, the head of the French National Assembly ‘s financial committee, Eric Woerth, claimed, “it would also have been appropriate to propose the prohibition of the dissemination and trade of crypto-assets to guarantee complete anonymity by preventing, by their design, any identification procedure.”

However, this doesn’t mean that Monero, ZCash, Dash, and other similar coins will eventually fade into obscurity, as the crypto market is not a zero-sum game where only one asset can maintain popularity. This type of crypto is still in demand with the most valuable privacy coin in terms of market cap, XMR, rising in price by approximately 86% since the beginning of the year. The BTC privacy updates still lie ahead and, while the jury is still out, privacy assets can take advantage of Bitcoin’s current lack of anonymity and fungibility and accelerate their attempts to gain more territory.

The Bitcoin for privacy debate will continue to rage on, so be sure to keep track of updates within the network and any future anonymity tests.