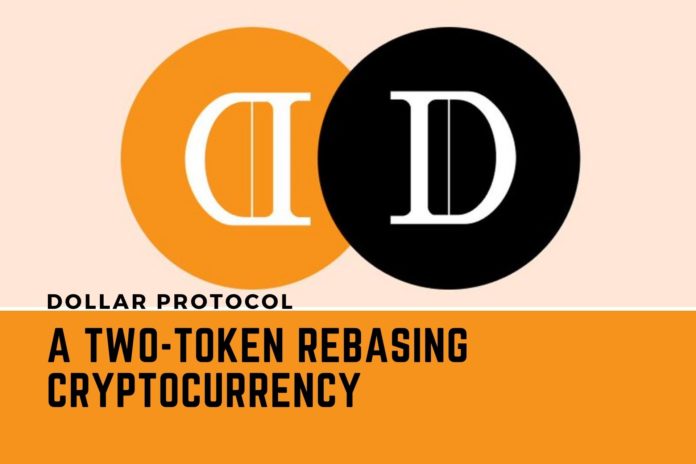 The Dollar Protocol capitalizes on the Rebasing concept (first initiated by Ampleforth) by developing an ecosystem. It works for reducing the price volatility that is native to every other crypto coin that runs on the principles of standard market forces.

Dollar Protocol boasts an improved structure of an elastic money supply. This money supply runs on the two-token model. The first token is identified as the object of stabilization and the second with the speculative nature of the market.

The Rebasing position at the end of the day decides the rewards accrued to the two main stakeholders on the platform. They are the users and speculators with both of them having a unique purpose that is also interdependent. The combined effect of their operating procedures brings a collective result in terms of the coin supply and stability.

Just like any financial system, the crypto world also has a limited coin supply. Even though some crypto instruments use deflationary methods and burn contracts to control the coin supply, it does not help that much.

In Dollar Protocol, rebasing is just one of the major chain links that work for the user’s benefit. The other is a two-token system operating collectively with rebasing, as basing alone does not provide comprehensive control of the market ecosystem.

So, the Dollar Protocol fuses rebasing with the two-token system to ensure that everything, including the price and quantity of the coin, remains stable and prevents volatility-induced spikes.

With this dual system, Dollar Protocol also offers two different types of coins to the users. One is the Dollar Coin, which is permanently pegged to $1 and the other is Seigniorage Share. The latter is the main investment portal that allows investors to provide liquidity by buying the shares and getting rewarded with the difference between the Dollar Coin’s value and production cost.

Understanding the Positive and Negative Rebases

To get a grasp of how rebase works, users need to know about a couple of things. Starting from the total supply of USD, the USD trading price, CPI, and the Rebase lag. From this, the preset formula finds out the supplyDelta and the new Dollars that are minted within 24 hours of the last rebase. In other words, this can be called the Time Weighted Average Price method.

Once the Share pool has the exact number of USD minted, these newly minted dollars will be distributed among the SHARE token holders on a pro-rata basis. Or, on a proportional basis. Since the total amount of dollars is more than the dollars supplied at the start of the day, this is a positive rebase.

This was for the Share token holders, and the miners are also eligible to get rewards daily with the positive rebase. Two main features help decide the miner’s reward. One, the ETH-USD total pool, including the locked and unlocked pool tokens. The second, is the unlocked pool token count.

A miner’s rewards further depends on their share in the mining pool. However, since rebasing is a cycle and it happens every 24 hours, the reward will be calculated when the user stops mining. So, according to the unlocked pool released on the day a user decided to stop mining, the rewards are generated according to the percentage of shares in the mining pool held by the user.

There is an innate method that allows new dollars to be minted, and this is pre-decided by the dollar contract. The new-minted dollars increase the supply of SHARES, which dissuades the users from burning dollars even during a contraction, thus restricting the value to further go down and allowing gradual recovery.

At present, the entire platform is running on the open-zeppelin ZOS, and the development team can upgrade it as the need arises. But, with its development and prospecting the level of scalability, Dollar Protocol will eventually be decentralized.

Already the Mining Share pool is completely operated by the users; the development team has only kept liquidity locked until the year 2022 via Uniswap. But, down the line, the entire governance part will be taken care of by the community.

Even though the Dollar Protocol ecosystem is at its nascent stage, it has received a warm welcome by the users due to its unique rebasing concept and two token supply. In a week of its launch, the USD circulation increased by 2x and has been listed on Etherscan, CoinGecko, and CoinMarketCap.