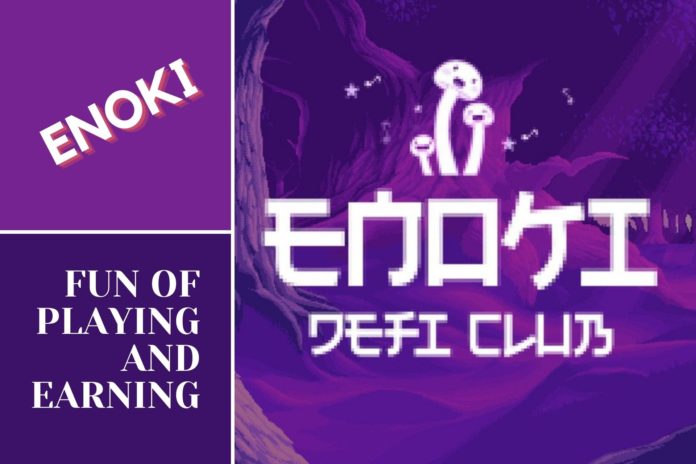 Enoki Finance tasks the users with harvesting mushrooms converted into NFTs and placed in the liquidity pools. The motive of using Enoki-style staking and farming is to add to the existing DeFi capabilities and enhance the way users engage with the platform.

At its core, Enoki wants to inoculate the DeFi ecosystem with a new form of players, investors, and developers. Users need to farm mushrooms by first planting $SPORES and then collect mushrooms from the yield in the form of NFT to earn $ENOKI.

The process might sound a bit complex, but it is a simple, easy, and fun way to start earning in the DeFi environment.

At its core, Enoki employs a yield farming protocol that is unique and works on the principles of a deflationary social governance model. By burning the SPORES, users can earn $ENOKI.

Every mushroom on the platform has a different lifespan, yield rate, and cost required to evolve. So, the quantity of SPORES users farm will further decide the mushrooms, which will further lead to attracting $ENOKI.

Hence, the users will enjoy the labor of farming better spores and getting high-rewarding mushrooms in return from the platform. The SPORES initially have a limited supply, but it can be increased by voting from the $ENOKI Holders.

The Mushroom NFTs can also be traded on other platforms apart from ENOKI. However, that should be done at the user’s own risk and without the involvement of the parent platform where these NFTs are yielded.

The Governing Protocol by ENOKI Algorithm

Not only for the token supply but the $ENOKI holders gain the power to vote and change the protocol. The holders are responsible. This makes ENOKI a true DeFi platform that is based on providing power to the community.

Furthermore, the motive of ENOKI is to maximize the profits and to ensure that the protocol is biased towards the community, the intensity of awards is higher towards the $ENOKI-$SPORE pair. To protect the user’s interest, Enoki Finance did not indulge in pre-minting by the developers.

The users can earn a high reward $ENOKI by staking on the Harvest Vault. The latter is a different type of vault from the Yield Farming Vaults present on other platforms.

The Harvest vault is programmed to automatically unstake the pool funds before the lifespan expires, thus protecting the users from unnecessary burning. Furthermore, the same harvest pool is programmed to market-sell the ENOKI to ensure an increase in farming rewards.

The ENOKI mushroom farm is different from other sorts of farms accompanying various DeFi platforms. The Foragers hold the $ENOKI tokens on the platform, which makes them eligible to vote in favor of halving or doubling the yield rate of the pool. Such powers were earlier only limited to the developers, but now the users can also implement this, making Enoki Finance an inclusive platform.

Once the users stake assets on the platform, the reward generated comes in $SPORES. Further, these $SPORES can be used to harvest NFT, and these NFTs can be further used to stake or trade the same in other secondary markets. In this, the automatic unstaking takes care that the users do not lose tokens because of the expired lifespan.

If not trading, users can also further stake $SPORE to earn $ENOKI and then again stake these assets to earn $SPORES. This makes a virtuous cycle of staking and earning rewards.

As of now, Enoki’s Mushroom Farming has gone live, and users can participate. Furthermore, Enoki has joined hands with Badger DAO to integrate the Mushroom’s NFT and enhance everybody’s staking experience.

Next, Enoki has also planned to further incentivize and enhance user’s DeFi experience by teaming up with Value FaaS. Value FaaS is inherently capable of incrementing the DeFi while ensuring mass adoption.

It is a long-term vision of Enoki to improve the cultural value of using DeFi in a decentralized manner while improving the interface of the financial ecosystem, which is aimed at enhancing the user experience for a long time to come.