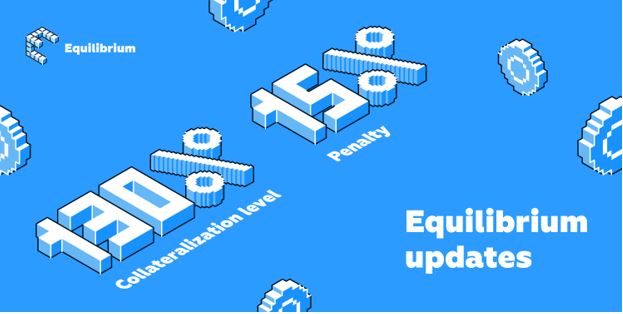 For the first time since its launch in April of this year, the parameters and logic that drive the Equilibrium framework have changed. At the same time, the project has rolled out a number of enhanced system updates for its users. Here’s what you need to know.

For those who wanted to overcollateralize their EOS holdings and generate EOSDT stablecoins — a USD-pegged cryptocurrency and Equilibrium’s primary digital asset — they used to have to do so at 170%. In other words, you had to pledge $170 of EOS in order to receive $100 of EOSDT.

Now that collateralization requirement has now been reduced to 130%, though the framework would encourage you to exceed that number. If you generate stablecoins at exactly the minimum requirement, then even a slight market decline will result in your position being liquidated — just because the collateralization requirement has been reduced doesn’t mean users should pledge the bare minimum. The more digital assets you pledge, the more robust your position will be against market uncertainty.

And in those instances where positions do get liquidated, the penalty for this happening has decreased from 20% to 15%. This simply means that it became a little less painful to see you collateralized debt position be finished.

There’s a new oracle service in the price feed.

Equilibrium used to have a single source of price information in Provable (formerly known as Oraclize). But the team has partnered with Delphi Oracle to add a second data source for digital asset prices. The framework determines a final reference price by taking the median of the two most recent values, making the project’s rates faster and significantly more precise. It determines prices every minute. By comparison to MakerDAO, an Ethereum-based competitor, this is a vast improvement.

As mentioned, Equilibrium fetches new and accurate price data every minute, and that information determines if and when a margin call should take place. By moving this mechanism such that it takes place on-chain, Equilibrium’s margin calls are much faster than they used to be and successfully get rid of any potential downtime from third parties carrying out their own operations.

Every on-chain margin call yields a deferred transaction where new margin calls happen. This causes a chain reaction of sorts, and theoretically enables Equilibrium to margin call positions at a rate of five positions per block, or ten margin calls per second. This is more than you could ever need or imagine!

Whether you’re a trader or a blockchain startup CEO, Equilibrium can now offer you a subscription to timely market data directly from its rates contract. If you want to make it happen, you only need to stake NUT tokens and call the public method ratesupdate(). This brings timestamped prices into your purview.

In summation, this compelling EOS-based project continues to evolve and remain relevant in the dynamic world of crypto. If you are looking for a reliable decentralized stablecoin, or you want to implement a worthwhile stablecoin in your own dApp development, then you need to be paying attention to Ethereum.