After what seemed like a reversal from the strong bear market for the entire crypto-market, many bullish investors found themselves initially taking profit from what appeared to be another Double Bottom Reversal. However, when it came time to re-test the neckline, the ETH-USD market decided to continue its move down. So why did the Double Bottom Reversal, outlined in a previous BTC-USD analysis, not yield the results during yesterday’s rally? 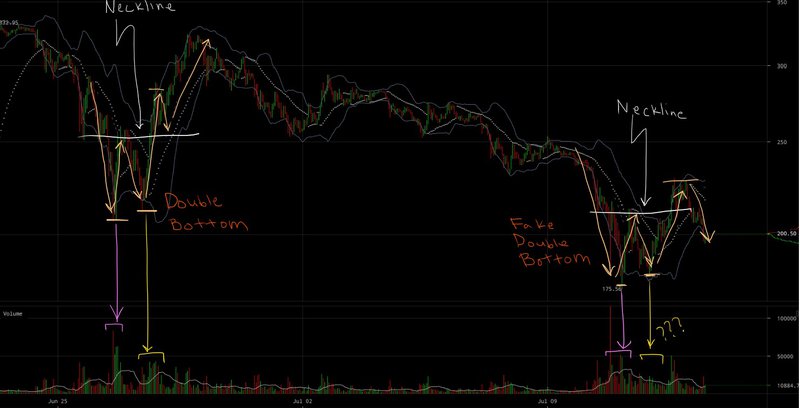 So, now that we’ve failed to reverse this bear trend once again, where does this leave us in the grand scheme of things?  To put this market into perspective, it is often useful to zoom out and view it on a high timescale: 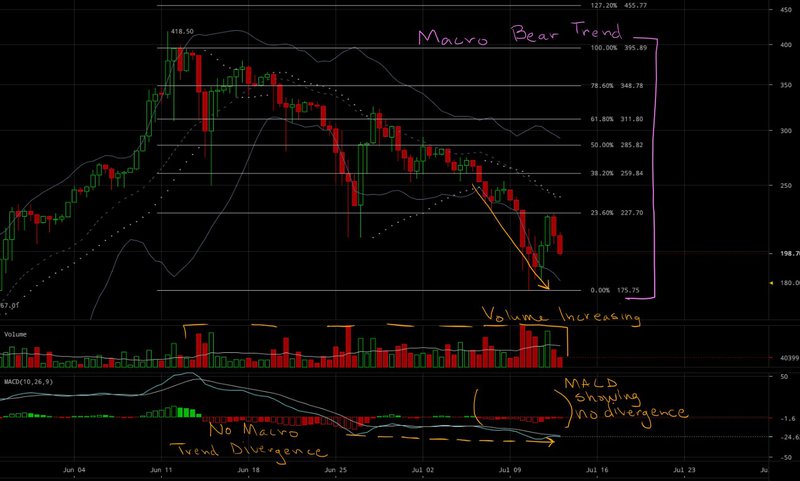 One of the most notable things about this bear trend is the failure to make a new high, time and time again. Each failure to make a new high has been coupled with an increase in overall market volume, which acts an initial indicator that the market still has more bearish pressure on it. Next, if we move on to the MACD (an indicator of market momentum), we can see two things:

At the time of this article, the market is finding major support and resistance levels along the Fibonacci Retracement values of the macro Bear trend (see pink notation in the image above). The fake Double Bottom Reversal propelled the market back up enough to test the 23 percent retracement value before ultimately pivoting with relative ease. On the macro scale, the next major line of support lies at our previous low: $175. It will be a hard-fought battle as this is a line of historic interest within the lifetime of the market. 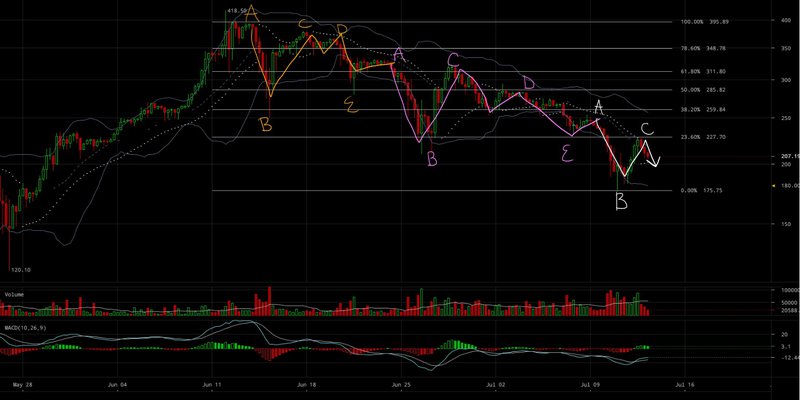 It’s entirely possible that the market won’t make it back down to to the 0 percent Fibonacci Retracement values, but, given the downward momentum outlined on several market indicators, it seems far more likely than not. With the massive Head and Shoulders (outlined earlier this week) on the BTC-USD markets looming in the background and testing key support levels, one can only speculate just how far the crypto-market will continue its downward move.

Trading and investing in digital assets like bitcoin and ether is highly speculative and comes with many risks. This analysis is for informational purposes and should not be considered investment advice. Statements and financial information on Bitcoin Magazine and BTCMedia related sites do not necessarily reflect the opinion of BTCMedia and should not be construed as an endorsement or recommendation to buy, sell or hold. Past performance is not necessarily indicative of future results.