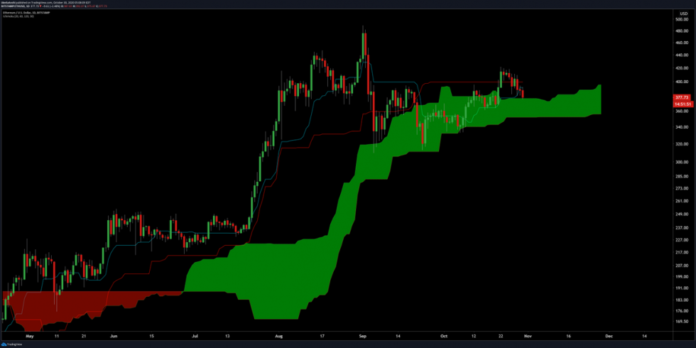 Bitcoin, Ethereum, and the aggregated crypto market have seen some rather lackluster price action as of late.

While BTC hovers around its yearly highs, ETH and most other altcoins are still trading well below their highs, which investors exiting them en masse as all the attention shifts to Bitcoin.

The intensity of this selling pressure signals that it may mark capitulation, but it’s hard to say for certain at this point.

One analyst is now noting that Ethereum could be in for further consolidation or downside as its price ranges in the upper-$300 region.

He notes that it just failed to complete a bullish technical formation that was previously in play.

At the time of writing, Ethereum is trading down just under 2% at its current price of $379. This marks a break below the crucial $380 level that has been acting as strong support as of late.

The decline beneath this level – if sustained heading into its daily close – could result in it seeing major downside in the days and weeks ahead.

A break back above this level, however, could prove to be bullish.

While sharing his thoughts on Ethereum’s outlook, one analyst said that a bull-favoring TK cross previously in play has since been invalidated.

He notes that another could form if ETH can hold above $350 in the coming few weeks.

“1D ETH: the bad news: could never muster the bullish TK cross. The good news: TK cross still possible over next few weeks if we stay in this 350-400 range,” he said while pointing to the below chart.

The coming few days should provide some insights into Ethereum’s short-term outlook.