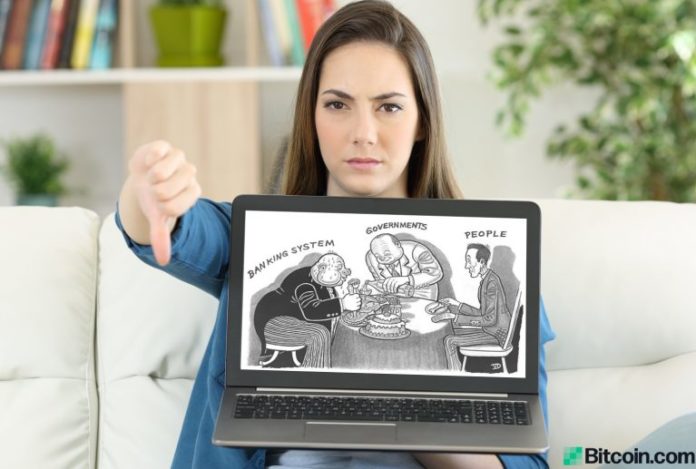 The coronavirus outbreak has sent shockwaves through the world’s economy and this has caused politicians and central bankers to react in various ways. However, global market leaders, Wall Street CEOs and hedge fund managers had one of the best years in more than a decade since the 2008 financial crisis. In fact, evidence shows that the bureaucracy and the modern banking cartel knew a crash was on the horizon, as the covid-19 crisis was simply the pin that popped the balloon.

Toward the end of 2019 market players and Wall Street’s top CEOs discussed whether or not the U.S. was facing a recession in 2020. This was after the stock market, S&P 500, and Dow Jones Industrial Average broke records last year. A few months before the coronavirus started spreading wildly, central banks like the Federal Reserve were already slashing rates and funneling billions into the hands of private banks. It’s almost as if the elite knew the bubble would pop in 2020, as bonds were manipulated by banks and stocks were massively overvalued. In fact, a majority of bankers predicted that 2020 would suffer from a really bad recession that could be worse than the last economic fallout. Central banks started easing up on monetary policy and created vast amounts of stimulus throughout the months of August, September, and October of last year.

When 2020 started, the smoke signals were everywhere, as hedge fund managers and strategists warned that the stock market was extremely overvalued. On January 14, financial experts reported on how the stock market has never been this big relative to the economy. “Such elevated valuations in past periods have weighed on equity returns over the subsequent five years and lowered the odds of positive outcomes,” Goldman Sachs strategist Sharmin Mossavar-Rahmani noted in the company’s 2020 outlook. “That the bulk of last year’s returns came from higher valuations, and not growth in earnings, only compounds investors’ concerns,” Mossavar-Rahmani added. Despite, the warnings of a massive stock market bubble, a few Wall Street execs continued to shill company shares that many people had deemed “overpriced.”

The Leveraged House of Cards – $12.7 Trillion in Global Derivatives Markets

Additionally, analysts also cautioned retail investors about how far apart Wall Street trading and the real world economy really is compared to the hyped up news headlines. Markets today are made up of algorithms, futures, options, high-frequency trading, and passive funds and there’s whopping $532 trillion in global derivatives markets. Most of the time stock market derivatives are not even traded by real people, as estimates note that 75% of all trades are computer-driven.

Moreover, derivatives like futures and options are usually not dealing with the physical goods themselves and they are simply trading pieces of paper that represent corn, oil, gold, and other commodities. The reason the derivatives markets could be frightening is due to the large separation from real-world goods. Megabanks and financial institutions did not learn from their prior mistakes and many of them are highly leveraged with derivatives products today. This means when real-world prices crash, highly leveraged institutions suffer major losses when spot prices are extremely turbulent like they were in 2008.

For centuries now, a number of people have been aware that the politicians and central banks have manipulated and ruined global economies. The U.S. is a perfect example of how the American bureaucracy and Wall Street moguls from the ‘House of Morgan’ destroyed the nation’s economy by introducing a fraudulent Ponzi system. History shows that the banker families in the early 1900s are the very same banking families who run the country’s finances today. The fraudulent banking cartel is likely the direct cause of all of the economic destruction Americans have seen for over three decades.

The Wall Street crashes in 1907, 1929 and in the early ‘30s, all stemmed from the greed and fraudulent activities invoked by the House of Morgan, otherwise known as the ‘Money Trust.’ Members of the Money Trust included the families of JP Morgan, JD Rockefeller and a small group of finance moguls. Morgan’s empire consisted of U.S. Steel, General Electric, International Mercantile Marine, International Harvester, AT&T, and approximately 21 railroads. Interestingly, during the Great Depression years, a slew of politicians and financiers stepped down months before the crash and many large firms restructured.

January 2020 Saw the Most CEO Resignations in the U.S. – 219 Corporate Leaders Abruptly Step Down

The 2020 crash which started on March 12, otherwise known as ‘Black Thursday,’ was a surprise for most Americans watching the stock market that day. However, today’s Wall Streeters, hedge fund managers, politicians, and bankers didn’t seem surprised by the bubble bursting at all. In fact, one could assume that the banking cartel and the American bureaucracy knew exactly when the crash was coming. One of the biggest signs of the elite knowing the crisis was imminent was how Q4 2019 had the most CEOs step down in years as 1,300 top executives left in November 2019. CEOs from mega-companies and financial institutions stepped down in record numbers again in December 2019. The public also witnessed the same trend in January and February, as January 2020 set a record for the most CEO departures in America recorded in a 30-day time span. 219 major chief execs unexpectedly left their positions with little to no warnings. Even though some of these CEOs ran these companies for decades, they stepped down abruptly. Disney’s CEO Bob Iger stepped down, Adam Bierman from Medmen suddenly up and left, and Mandy Ginsberg of Tinder and Match Group stepped away from her firm’s as well. The list of noteworthy CEOs who stepped down is quite exhaustive, but includes people like Hulu’s Randy Freer, Mastercard’s Ajay Banga, IBM’s Ginni Rometty, Tmobile’s John Legere, Harley Davidson’s Matt Levatich, Linkedin’s Jeff Weiner, Microsoft’s Bill Gates, Salesforce’s Keith Block, Lbrand’s (Victoria’s Secret, Bath & Body Works, Pink) Leslie Wexner, and many more well known chief executives.

The protectors of today’s corporatists and monopolies, otherwise known as U.S. politicians, were also scrutinized for knowing about the economic impact in advance. Senator Kelly Loeffler (R-GA) was accused of sharing insider information and she dumped millions in shares after the Senate’s coronavirus briefing took place.

Loeffler wasn’t the only bureaucrat accused of dumping on the stock markets before ‘Black Thursday,’ as U.S. representatives like North Carolina’s Richard Burr, California’s Dianne Feinstein, and Oklahoma’s James Inhofe all sold stocks before the Senate’s classified briefing on January 24. None of these politicians or corporatists warned the general public of a looming stock market crash.

Cryptocurrency advocates have been warning about the monetary manipulation for well over a decade and many bitcoiners predicted these events. The money system has been fraudulent for a very long time and digital currencies like bitcoin could transform the world’s monetary system for the better. Reading this article should tell you that there is no free market within the United States and the capitalism that exists is really cronyism mixed with manipulative profits.

Concepts like cryptocurrencies and free markets are becoming more enticing to people every single day. The reason for this trend is largely because central bankers and politicians are making it blatantly obvious that they are screwing society. The elite knowing about the mid-March stock market fallout well beforehand should be no surprise to those who understand the collusion between the state and central banks. More than ever, activists and free market advocates wholeheartedly believe that the desire to separate money from the state is a goal worth fighting for. Especially since we have solid proof of fraudulent behavior from our so-called representatives and banking institutions.

What do you think about politicians and the elite knowing about the crash well before covid-19? Let us know what you think in the comments below.

Poolin.com has put together an updated analysis of the present cost of putting together a profitable Bitcoin mining rig. This...