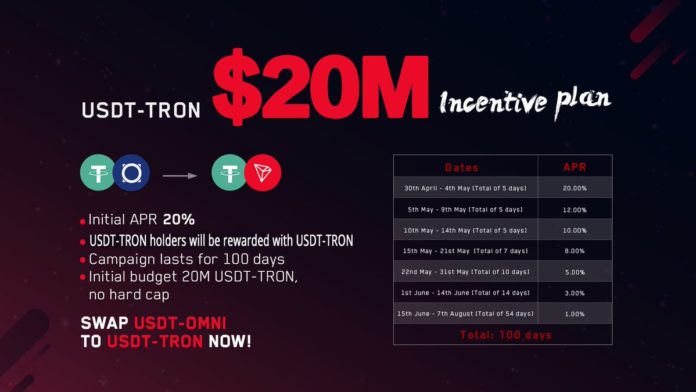 Justin Sun is the founder and CEO of TRON. Among other things, the Blockchain project is designed to challenge the second-largest crypto-currency Ether and the Ethereum Blockchain. To do this, the management team is making every effort to attract new users.

It’s no secret that Justin Sun and Vitalik Buterin are not the best friends. In a Twitter dispute, for example, Buterin says that the white paper for Tron is nothing but a copy of Ethereum. In addition, Justin Sun also openly says that he wants to overtake Ethereum: not only in quality, but also in the distribution.

Just to achieve the latter, Tron aka Justin Sun does not seem to miss any opportunity to lure crypto users “to Tron”. The most recent marketing action is a $ 20 million cash payout. Anyone holding their USDT on the Tron Blockchain can win this. The campaign started on March 21st and lasts a total of 100 days:

To do this, users using Tether on another protocol (ERC-20, OMNI or Bitcoin) need to switch to Tron. This can be done according to Decrypt on Huobi or OKEx, between the 30th of April and the end of May. to convert to the new USDT Tron.

What you need to know: Tethers are burned as soon as they are changed back to Fiat. Now, when Tron Tethers are acquired, they also spawn on the Mainnet of Tron, any tethers that ran on other protocols “disappear”

The goal that Tron promises is to lure users away from the Ethereum Blockchain. Until now, the Stable Coin Tether was only compatible with the Bitcoin and Ethereum Blockchain as well as the OMNI protocol. If you switch to the TRON platform then you will also have TRX-compatible tethers. The TRX standard is compatible with Ethereum, since the TRON token itself was still an ERC20 token before its migration, ie it ran on the basis of Ethereum.

The behavior of Sun is not new. Already on December 6 last year, he announced via Twitter that he had set up a new find for Ethereum and EOS developers, for those who migrated their dApps (across) the Tron protocol. The company promotes faster transactions and lower fees and an improved user experience.

In order to follow the migration of the users of the migration of the coins, Justin Sun therefore advertises with quite high amounts of money. Meanwhile, however, he is expanding his own business and trying to establish himself in the blockchain world. Currently he is fighting in the ranking of the crypto currencies with the “stable coin” tether.