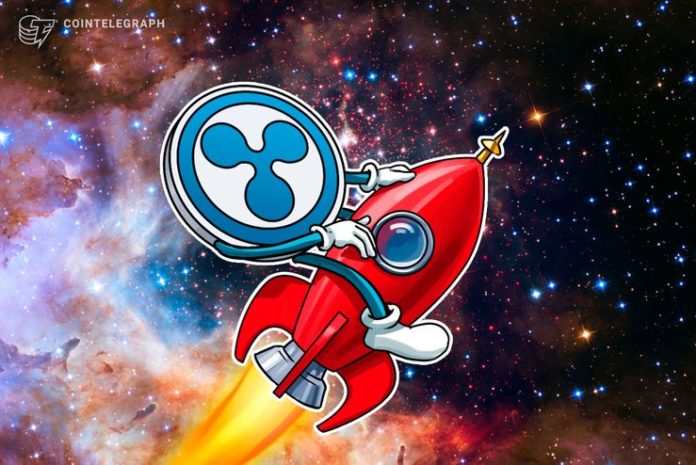 Over the past week, altcoin Ripple’s (XRP) price has gone through the roof. It has seen an unprecedented 140 percent growth over the past seven days, up almost 63 percent in the past 24 hours alone, trading at around $0.61 at press time.

XRP has gone as far as to beat Ethereum (ETH) to be ranked number two by total market capitalization on CoinMarketCap (returned to the third spot by the press time). What could possibly drive the price so high? While there’s no definite answer to that question, here’s some background and theories.

Background: What does Ripple bring to the table?

Ripple is a California-based payment network and protocol company that was established in 2012. Essentially, it focuses on facilitating transfers between major financial corporations.

Ripple is not quite your average cryptocurrency — in fact, some might argue it’s not a cryptocurrency at all. It champions a less conventional ideology for the industry: Ripple doesn’t want to overthrow the government along with the banking system. Conversely, it chose to work with mainstream financial players from the very start. As Brad Garlinghouse, CEO of Ripple, told Cointelegraph in March:

Garlinghouse believes that governments aren’t going anywhere, saying, “In my lifetime, I don’t think that’s happening” — which is why he finds it logical to cooperate with them and work within the existing regulatory framework. That attitude helped Ripple land crucial partnerships with important players, including China-based payment services provider Lian-Lian, the Saudi Arabian Monetary Authority and Western Union, among others.

Ripple’s native token is XRP. However, the company draws a line between the two: Ripple presents itself as a technology company, while XRP is an “independent digital asset” built on open-source blockchain technology called XRP Ledger. As per its website, Ripple uses both XRP and XRP Ledger in its products, such as xRapid, and owns 60 billion XPR — however, it allegedly does not control either the token nor the technology.

xRapid is a blockchain-backed tool designed by Ripple for easing cross-border fiat transfers between financial institutions.

Ripple hopes to use it to pioneer the mainstream financial system: After testing the platform to run payments between the United States and Mexico in May, it proved to save transaction costs by 40-70 percent. Bypassing conventional foreign exchange providers, xRapid also increased transaction speed to “just over two minutes.” In comparison, according to McKinsey research, typical international payments take between three and five working days to complete.

The recent boost could be explained by the company’s recent announcement that xRapid could be launched commercially “in the next month or so,” which was made by head of regulatory relations for Asia-Pacific and the Middle East at Ripple Sagar Sarbhai in an interview with CNBC on Sept. 17:

“I am very confident that in the next one month or so, you will see some good news coming in where we launch the product live in production.”

To explain XRP’s recent breakthrough, some Reddit users suggest that xRapid has been quietly launched, while Ripple is going to announce it at a later stage. “I think they are letting banks in one by one so the XRP markets would not go totally ballistic if everyone jumps in the same time,” wrote u/tradernoob76.

“Because of the volume and books [are] being eaten alive, leaving no corpses behind (except fudders), I wouldn’t be surprised if xRapid is in use. People try to sell, but it comes back up and this volume is off the charts and is increasing. If it’s just investors, then [a] new market opened somewhere with lots of people trading suddenly, which is less likely,” another user agreed. Either way, an official xRapid launch would be big, positive news for XRP.

More concrete Ripple-related news this week came from PNC, one of top ten largest U.S. banks with 8 million customers and retail branches in 19 states. On Wednesday, Sept. 19, Ripple announced that PNC had joined RippleNet to process international payments for its customers. “It’s one of the first major U.S. banks to use blockchain tech to streamline payments into and out of the country,” Ripple tweeted.

RippleNet is a decentralized network of banks and payment providers that connect through Ripple’s solutions, such as xCurrent. Specifically, a particular PNC unit — Treasury Management — will use xCurrent to speed up overseas transactions held by U.S. commercial clients.

Ripple emphasises that the solution will allow PNC business clients to receive payments against their invoices instantly. Senior vice president for product management of Ripple, Asheesh Birla, thinks that using xCurrent in banking is the first step toward the adoption of other Ripple products, such as xRapid. “It’s a way [for the banks] to get their toe into the water,” Birla told Reuters.

Notably, xCurrent — unlike xRapid — doesn’t cut out the corresponding bank from the entire process, thus not quite changing the conventional system but rather modifying it. The latter uses immutable “interledger” protocol, which “is not a distributed ledger,” as confirmed by David Schwartz, Ripple’s chief cryptographer, who was sceptical about banks using xCurrent in cross-border payments. As Cointelegraph reported in June, David Schwartz declared banks were unlikely to deploy the technology because of low scalability and privacy problems.

Nevertheless, the news proved to be bullish. Interestingly, BlackRock Inc., a major American global investment management, used to be a subsidiary of PNC during the period of 1995-1999. Currently, PNC is BlackRock’s largest shareholder, owning a 21.45 percent stake of the company.

In a recent interview with CNBC, Sarbhai countered concerns that XPR is likely to come under a security classification in the U.S. — as several high-profile and ongoing lawsuits allege.

To defend the company’s native token, he pointed to the open-source protocol of the XRP ledger and its independence from the corporation itself, emphasizing that Ripple controls only seven percent of the validator nodes operating on the network. He further argued that XRP investors do not secure a stake or shareholder-like position when they purchase the asset and emphasized that countries such as Australia, the Philippines and Thailand have all classified XRP as a commodity.

Thus, similarly to Bitcoin and Ethereum, XRP might potentially become recognized as a “non-security” by the U.S. Securities and Exchange Commission (SEC), which has proven to be bullish for those cryptocurrencies in the past.

The massive surge in price could also be explained by good old ‘fear of missing out,’ or FOMO — a particularly powerful force on the crypto market. This seems to be one of the main sentiments on Reddit. According to this theory, as soon as Ripple experienced the first pump on Sept. 18, other investors started to pile in, and the situation snowballed from there.

Can Tron (TRX) follow in the Ripple (XRP) footsteps?

It’s no secret that the cryptocurrency markets have been in an overall slump, especially when you consider all of the...