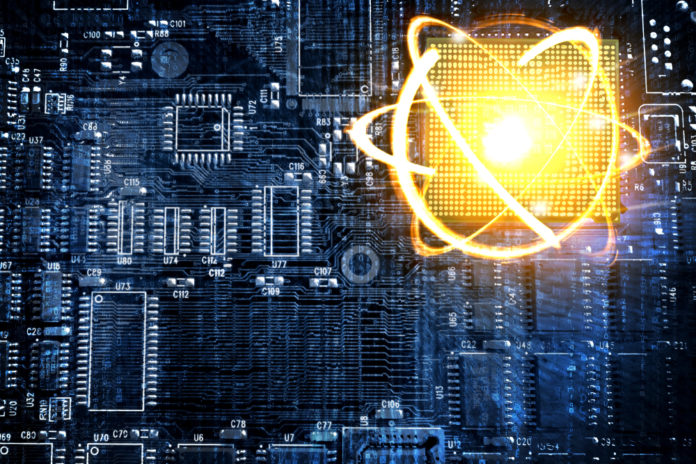 New super chips are supposed to revolutionize the computer – and question cryptocurrencies for the time being.

Bristlecone call Google’s researchers their latest foray into the development of the first quantum supercomputer. With the chip, which the group showed publicly this week for the first time, the developers leave classic chip manufacturers like Intel and competitors like IBM and Microsoft – at least in the chip size – for the time being behind. Intel’s new chip has 72 quantum storage units, so-called qubits – so far were IBM with 50 and Intel with 49 units front.

Google’s new quantum chip is big enough to be the first of its kind, at least theoretically, to outperform classic supercomputers when solving very special computing tasks, says Google’s chief quantum researcher Julian Kelly. It could serve as proof of the future capability of the technology. According to their own assessment, Google would have taken an important step ahead of the competition in the competition for the first functional quantum chip. This is all the more remarkable because Google is not a classic chip maker.

In the field of quantum computing, not only hardware manufacturers such as Intel, IBM and Samsung are currently doing expensive basic research, but also software manufacturers like Microsoft, Internet companies like Google or the Chinese Internet giant Alibaba. But even banks like Barclays and the automaker Daimler are investing in this research.

“The quantum storage devices, the qubits, use quantum mechanics to hold information in a so-called superposition – correlated combinations of these devices can store and process many times more data than a traditional chip.” In a classic chip design, Mayberrry explains, every memory information has a value of zero or one. In the quantum chip, on the other hand, there may be a memory value between these two extremes. This allows information to be processed much faster than before.

So far, however, neither Google nor Intel’s or IBM’s quantum chip is able to solve real tasks such as the decryption of cryptographic information or in the field of artificial intelligence. From a practical use, the technology is still several years away, says Mayberry: “For commercial use, we must develop chips with about one million qubits.”

In competition, Intel and Google are working on fundamentally different technologies. Whereas Intel uses designs based on superconducting components that have to be cooled to a temperature very close to absolute zero, Google’s chip is based on so-called spin qubits. They also have to be cooled extremely, but at least 50 times warmer than previous chips.

That’s why they can be built much smaller than previous designs. At least in theory, quantum computers with several hundred storage units are conceivable. Meanwhile, Intel is also developing spin qubits. At the CES Technology Show, a process was presented in January to produce the technology in classical silicon production processes. Thus, a near-series quantum chip suddenly appears much closer than previously expected by the research community.
Only in the laboratory so far has the superiority

Because the construction of individual supercooled chips for the laboratory is one thing. But for commercial use, the quantum chips lack so far important features: they hold the information in their memories only a few microseconds long – not long enough to run a program or process information.

In addition, the chips read out stored quantum information incorrectly. Google’s new Bristlecone chip, for example, is wrong in one in a hundred cases. That’s enough to prove the superiority of the technology in the lab – but it’s not enough to solve real tasks.

The first commercial application of the chips is expected to be cryptography: It has already been proven theoretically that quantum chips can solve the mathematical tasks of finding large prime numbers many times faster than classical supercomputers.

Problem for Bitcoin and Co.

That would be a threat to today’s digital currencies like Bitcoin. Their security technology Blockchain is based on the fact that it would take ages to calculate the encryption code for the money transactions within a digital currency.

However, quantum computers fundamentally call this equation into question: anyone who owns the first functional computer with tens of thousands of qubits could be the first to question the encryption of cryptocurrencies. Thus, the Bitcoin system is a kind of early warning indicator for whether a research team has already solved this task.

Not only could quantum chips make all blockchain developments worthless, but they could also crack all the Internet’s existing encryption technologies. Although there is no fully functional quantum chip yet, cryptographers are already working on new encryption methods that are no longer based on primes.

If Google’s and Intel’s researchers were to succeed faster than expected, a complete generation of security technologies would have to be swapped out within a short period of time.