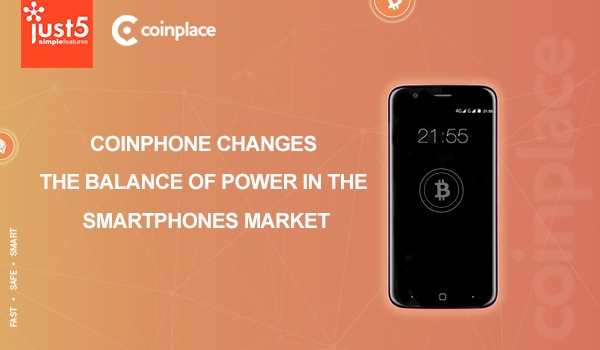 CoinPhone, the first smartphone with an integrated safety environment and functionality for settlements in cryptocurrencies was announced during GSMA Mobile World Congress 2018 on March 1.

Currently in order to carry out any operations with cryptocurrencies one has to connect a cold wallet on a physical medium to a laptop with Internet connection. Naturally, one can’t even dream about immediate transactions in such a situation. The emphasis here is put on safety, not on speed. Mobile devices, on the contrary, secure high operation speed by have much lower safety levels. Lots of news about the users of banking apps that lose their money in hacker attacks are published almost every day.

CoinPhone (to be developed by the international brand Just5) is expected to solve all these problems. It is going to be a mobile device protected from hacker attacks on several levels. The phone will have an in-built cold wallet to provide maximum security of transactions. For additional protection the device will have a fingerprint scanner, and the hot wallet function will allow its user to pay for purchases with cryptocurrencies via the NFC module.

Payments both in fiat money and in cryptocurrencies will become safe, and the only thing you will need for all operations will be one portable device.

Just5 telecome company chose CoinPlace as its partner for the implementation of this innovative project. CoinPlace is the first p2p platform for buying ICO tokens and cryptocurrencies. All models of the range (and there will be three of them, aimed at different pricing categories) will have the CoinPlace app preinstalled. The application will make the process of buying and exchanging cryptocurrencies and ICO tokens even easier. The operations will be carried out via the CoinPlace platform from any location.

CoinPlace Chief Development Officer Stanislav Teo believes that project would satisfy the needs generated by future changes: “In the near future the volume of settlements in cryptocurrencies will grow in the world. Decentralization, absence of intermediaries, and migration of all services to mobile devices are global tendencies. More and more payments are made directly, but such transactions require storage media. Currently, cold wallets are used for these purposes, but they are useless without a laptop. This sounds weird – like yet another intermediary! And the very idea of blockchain is to get rid of them all.”
Just5 is developing a line of smartphones – Coinphone Lite, Coinphone Pro, Coinphone Pro Note with 5.5″ to 6.2″ diagonal and up to IP68 protection level (including impact and water resistance). The phones will be equipped with a fingerprints scanner, face ID, NFC tag for contactless payments, and special safety software requiring the approval of the user for sending out any data. When connected to a laptop or a PC, the phone can serve as a cold wallet.
The basic version of Coinhone will cost 99 EUR, and the top version price will amount to approximately 499 EUR. Just5 has been manufacturing smartphones for mass market for 9 years and is an owner of trademarks and patents, as well as the awardee of many prizes including Effie, Reddot and IF. It is also a partner of Google.

CoinPlace is the first P2P platform for cryptocurrencies and tokens trading. Currently the platform trades Bitcoin and tokens of several third party ICOs. Five more cryptocurrencies (Bitcoin Cash, Litecoin, Etherium Classic, Dash, Tether) will have become available by the end of May. By late 2018 the platform will be supporting over 13 currencies (incl. Bitcoin, Etherium, Bitcoin Cash, Litecoin, Etherium Classic, Dash, Tether) as well as tokens of over 50 ICO-проектов. The history of CoinPlace started in April 2017 года, and its main idea is to make the world of cryptocurrencies available to the mass market. By September 2017 the company had set out the model of its own tokens, and in December the sake of CPL tokens was launched in the framework of the Pre-ICO round.

On March 20 the platform will start selling its own tokens in the course of the main ICO round.