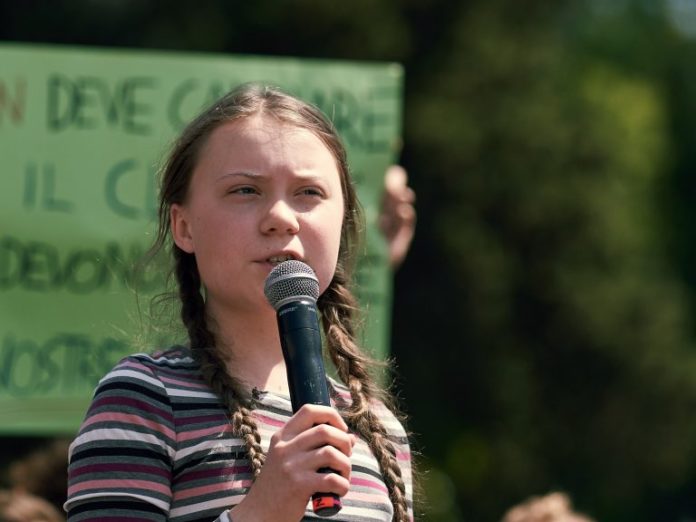 Saving planet Earth is a noble goal with many different dimensions. Climate change needs to be addressed vigorously as our world warms up faster than ever. Economic development needs a higher degree of financial freedom to provide everyone access to opportunities and wealth. A teenager from Scandinavia, dubbed a “next generation leader,” has once again challenged governments and politicians. “If we can save the banks, we can save the world,” Sweden’s Greta Thunberg told those who always find money to postpone the problems but often claim real solutions are too expensive.

Greta, a 16-year-old student from Stockholm, has become a loud voice for bold action against the looming “climate crisis” as she calls it. Last year, the self-made environmental activist began her “school strikes” to protest the inability of decision makers and the current generation of grownups to tackle the issue. Handing out leaflets stating “I am doing this because you adults are shitting on my future” outside the Swedish parliament during school hours was how she chose to send her message.

She started her campaign before Sweden’s general elections in September 2018, after the hottest summer in over two centuries brought heat waves and wildfires to the Nordic country. Greta missed school for three weeks to sit down in front of the Riksdag and demand that her government take steps to reduce carbon emissions in accordance with the Paris Agreement. After the election, her “Skolstrejk för klimatet” protest continued on Fridays, inspiring similar actions by thousands of students around the world in what has been dubbed the “Greta Thunberg effect.” She is now participating in demonstrations throughout Europe as well. The strategy eventually gave her a world stage where she told business leaders their financial success comes with an unthinkable price tag, warned politicians all their parties have failed, and told media not enough has been done to create broad public awareness about climate change. Her blunt manner and the way she puts the problems of global warming in perspective made her a coveted public speaker for the cause of all scientists and activists who point out we have only about a decade before our mistakes become irreversible.

Not content with limiting herself to protests and speeches, Greta Thunberg has set a personal example for how everyone can reduce their carbon footprint, including giving up flying and switching to a meat-free diet. She also managed to convince her own parents, Swedish opera singer Malena Ernman and actor Svante Thunberg, to implement these life-style changes in their family. Her efforts won support from academics and global leaders, while philanthropists and investors donated funds to the grassroots movement Extinction Rebellion and school strike groups in various countries.

We Have Money, We Lack Will

Thunberg’s latest mission took her on a sail across the Atlantic this past August. The 16-year-old crossed the ocean from Plymouth in the U.K. to New York in a 60-foot racing yacht, a vessel equipped with solar panels and underwater turbines. The trip was announced as carbon neutral and was organized to demonstrate Greta’s commitment to the goal of reducing CO2 emissions. It started on August 14 and took about two weeks. On the other side of the pond, the young activist will be attending the United Nations Climate Action Summit in New York City and the COP 25 climate change conference in the Chilean capital Santiago.

Greta Thunberg arrived in America ahead of the September 20 global climate strikes which are expected to bring to the streets millions of protesters in over 150 countries. They are scheduled to coincide with the UN summit on climate change which kicks off on September 23. Greta’s relentless activism helped inspire the protests. “I want September 20 to be a tipping point. I want world leaders to feel like they have too many people watching them,” she said during an event on Monday, directly confronting elites as usual. And her strongest message was addressed to those who insist it’s too expensive to deal with the climate crisis by adopting comprehensive new policies:

Quoted by the Common Dreams portal, Greta further noted that “If there is something we are not lacking in this world, it’s money. Of course, many people do lack money, but governments and these people in power, they do not lack money.” The Swede believes we also need to have the polluters pay for the damage they are causing. “So, I would not even respond to that argument, because it has been said so many times, the money is there. What we lack now is political will and social will to do it,” she stressed.

Indeed, the last global financial crisis showed governments are willing to spend billions to save financial institutions deemed too big to fail, despite the wrong decisions of their very well paid managers. According to a paper authored by Deborah Lucas, finance professor at the MIT Sloan School of Management, the total direct cost of crisis-related bailouts during the 2008 financial meltdown in the U.S. alone was about $498 billion on a fair value basis. That amounted to 3.5% of the country’s gross domestic product in 2009. Lucas also found the main beneficiaries were the large, unsecured creditors of financial institutions, big institutional investors, pension and mutual funds, insurance companies, and sovereigns. Calculating the cost of bank bailouts correctly is important as their real price tag often remains hidden from taxpayers whose money is spent to rescue wealthy bankers. That’s even more important now when the next financial crisis seems to be on the horizon, with central banks preparing for new interest rate cuts and planning for more quantitative easing. Just as Greta points out, the funds are there and they are definitely more needed elsewhere. Supporting the limiting of factors that lead to intensified climate change is worth more than financing policies which simply postpone the problems of the traditional financial system for the next generations to solve.

While inventing Bitcoin, Satoshi Nakamoto must have thought about these matters. We know the creator of the world’s first decentralized cryptocurrency inscribed into the genesis block the Times headline “Chancellor on Brink of Second Bailout for Banks” from the Jan. 3, 2009 issue. It’s difficult to know exactly why Satoshi did so, but he was likely worried about the continued wasting of people’s money on saving failed corporations that under normal market conditions would have been left to go bankrupt, just like thousands of homebuyers, for instance. If a decade later, with another crisis approaching, you are more convinced about the need for a financial alternative to fiat money and want to invest in cryptocurrencies, you can do so safely and securely by purchasing bitcoin cash and other major coins at buy.Bitcoin.com. To freely trade your crypto assets, visit our noncustodial, peer-to-peer marketplace local.Bitcoin.com, which already has thousands of users around the world. Also, check out our newly launched premier trading platform exchange.Bitcoin.com. Registered users can access it right now and over 10,000 have already signed up.

Do you think the world would have enough money to adequately address the problems of climate change if it didn’t spend so much on bank bailouts? Share your thoughts on the subject in the comments section below.

The arguments as to why bitcoin is superior to the banking system are pretty clear cut to anyone that has...