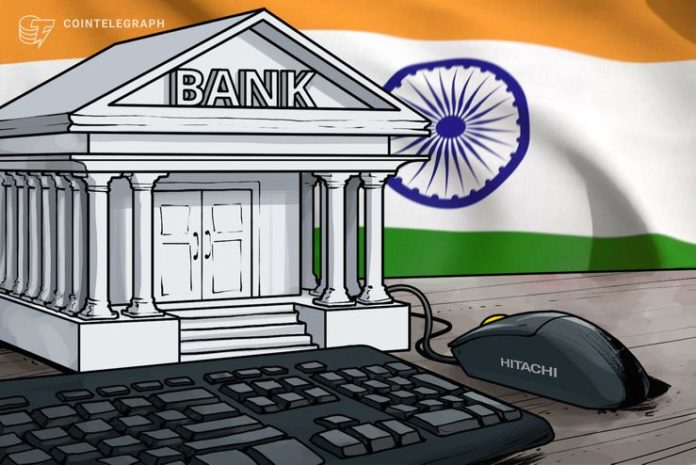 Hitachi Payments has partnered with the State Bank of India (SBI) to establish a nationwide digital payments platform, according to a press release published by Hitachi Oct. 29.

Under the aegis of the government’s “Digital India” campaign, Hitachi will provide SBI with solutions including its Internet-of-Things (IoT) platform “Lumada,” which was implemented as the base platform for a major blockchain proof-of-concept (PoC) for supply chain management  undertaken with Japan’s Mizuho Financial Group last year.

Hitachi Payments is a wholly-owned subsidiary in India of multinational tech conglomerate Hitachi, which provides technology-led payment solutions for financial institutions. It reportedly has 55,000 ATMs and 850,000 point of sale (POS) devices (including mobile POS) under management in India.

Indian government-owned SBI is the largest commercial bank in the country, with 23 percent market share of assets and one quarter of the total deposits and loan market. According to the press release, it serves over 420 million customers and manages over 6,00,000 POS terminals.

The Hitachi Payments-SBI joint venture is pitched as a bid to accelerate the “digitalization” of financial services in India by harnessing Lumada and other cutting-edge technological solutions in order to expand the digital service business in the country. Hitachi Payments has reportedly been providing services for SBI’s digital payment acceptance network as of 2011.

Through the new partnership, Hitachi Payments is set to invest 26 percent in SBI’s subsidiary SBI Payments, which is described as India’s “largest merchant acquirer in the market in terms of [POS] terminals.”

As previously reported, SBI has been developing a blockchain solution for managing know-your-customer (KYC) protocols since November 2017, and was also a founding member of the blockchain for banking research consortium “BankChain.”

As of February 2017, the conglomerate has been working with blockchain development firm Tech Bureau to integrate a NEM-based platform into Hitachi’s point management system for merchants, “PointInfinity.” The latter entails a POS software solution for loyalty programs that is reportedly used by over 150 million members in Japan.

It has been confirmed that cryptocurrency exchange Bitstamp has been acquired by a Belgian investment firm which is a subsidiary...