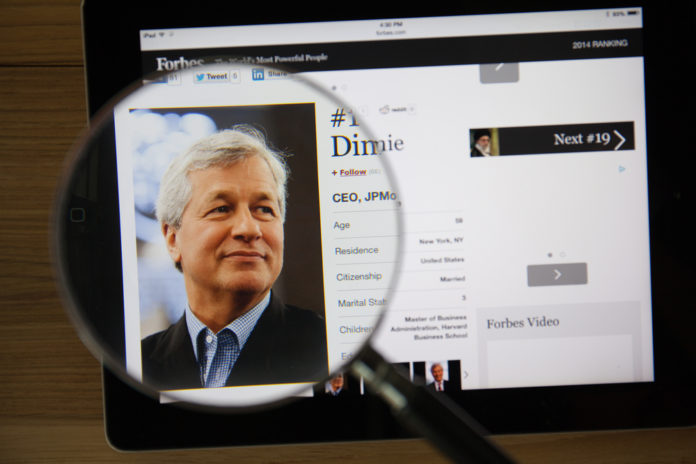 This week, crypto-skeptical statements have been made by JPMorgan CEO Jamie Dimon, one of Bitcoin’s best known adversaries. In the past, Jamie Dimon, along with other financial names, shot Bitcoin. However, in recent months, despite a weak crypto market or maybe just because of that, it has calmed down in terms of criticism of cryptocurrencies. Even though all major authorities, corporations and CFOs are now seriously considering Bitcoin, the Dimon does not refrain from using crude arguments against Bitcoin. But it’s not about ridiculing Jamie Dimon as a person, but rather putting the meaningfulness into the context of his bank’s business.

Despite the still-standing credo in the banking sector, “Blockchain hui, Bitcoin pfui”, a lot has happened in terms of crypto-openness. The fact that more and more banks are actively involved in the crypto currency business in their range of services, the Bitcoin criticism is also in the conservative banking in retreat. All the more fails Jamie Dimon with his statements about Bitcoin from the frame. So he asserted at the gala ceremony of the Aspen Institute that he maintained his statement that Bitcoin is a scam (fraud). In addition, he added that cryptocurrencies should be banned by the government. A statement that even most Bitcoin opponents would not make. Even these are aware of how nonsensical a ban on Bitcoin is.

With the head through the wall

Rather than relativising his statements, Dimon then submitted to the Harvard Business Review earlier this week, stating that cryptocurrencies are not the same as gold or fiat currencies because they are not backed by lawmakers, the police, or courts – without further differentiating or categorizing that statement , Thus Dimon suggests that in his world assets exist only when they are fully regulated. This simple world view or subdivision is even further ad absurdum, by expressing itself positively to Blockchain in contrast to cryptocurrencies. So it is said in the interview that the blockchain in contrast to cryptocurrencies is real.

The fact that Blockchain, unlike Bitcoin, is real, is probably the most misleading statement that Jamie Dimon has ever made. Especially since he does not really explain what is real for him and what is not. In a philosophy seminar at the university such expressions may be justifiable. On the other hand, such statements are simply embarrassing to the head of the biggest investment bank.

Of course, it is legitimate to criticize individual aspects of the crypto-economy. But such statements testify to a simple ignorance and reinforce the accusation that in the ivory towers of some old-economy institutions, there is no will to get involved in change.

What does that mean for the crypto adaptation at JPMorgan?

Certainly, not all employees at JPMorgan will share the opinion of their boss. This does not change the fact that Jamie Dimon sets the tone. This restrictive attitude creates a climate of uncertainty that prevents employees from developing innovative solutions to cryptographic services.

The rejection of crypto-assets is also in massive contradiction with the inherent motivation of an investment bank. After all, in contrast to savings banks or Volksbanks, the basic logic of investment banks is to create investment opportunities for their clients. So it’s not about granting loans to medium-sized companies, but about portraying everything that can be represented by derivatives or financial contracts. Now, cryptocurrencies, which are also just for speculation and investment, to ignore, is unusual. Especially as the big neighbor Goldman Sachs has openly communicated to work on crypto services and offer them according to the existing customer demand in a timely manner.

The message that Jamie Dimon sends to his bank customers is anything but smart from a communications perspective. This is what customers expect: Although we have so far served all customer needs in terms of financial products, we will ignore the new asset class of crypto currencies without sound justification. In other words, if they still want to invest in crypto-assets, they are going to our competitors, who will meet their demand.

In the future, JPMorgan’s Communications Department will have to do a lot to stop JPMorgan from being an anti-innovation investment bank. Still, you have to concede to Jamie Dimon that he is capable of quite right conclusions. So he added in advance to his rude remarks in the Harvard Business Review, “I probably should not talk about cryptocurrencies anymore.” Had he just stuck to it.