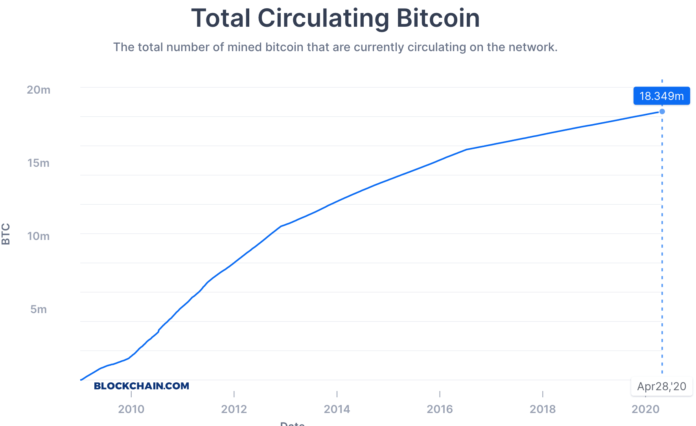 How many Bitcoins are left?

What determines how many Bitcoins are left?

The remaining Bitcoins not in circulation are in a pool dedicated to rewarding miners for maintaining the integrity of the network. As miners validate transactions and create new blocks, they receive the remaining Bitcoins from this pool as a reward. The Bitcoin source code outlines how the mining rewards should be distributed and when these distributions occur.

The reward for mining each block started at 50 Bitcoins and has since “halved” twice. The current reward sits at 12.5 Bitcoins per block. As of the May 2020 Bitcoin Halvening, the reward will be split down to 6.25.

When will no Bitcoins be left?

The mining reward halving occurs every 210,000 blocks. With blocks taking about 10 minutes on average to mine, halvings occur about every 4 years.

After 64 total halvings, there will be no more Bitcoins left to reward miners and all 21 million Bitcoins will be in circulation. This will occur sometime in 2140.

You may be wondering, “Without block rewards, what incentive do miners have to validate transactions?”

Miners receive more than just the block rewards when they create new blocks. They also earn the fees associated with each transaction. Transaction fees vary with the amount of network congestion and transaction size.

Miners generally prioritize transactions by the highest Satoshi/byte fee. The higher the transaction fee that you pay, the more likely a miner will process your transaction.

Once there are no Bitcoins left for mining rewards, the transaction fees should be high enough of an incentive for miners to continue running the network.

The post How Many Bitcoins are Left? appeared first on CoinCentral.