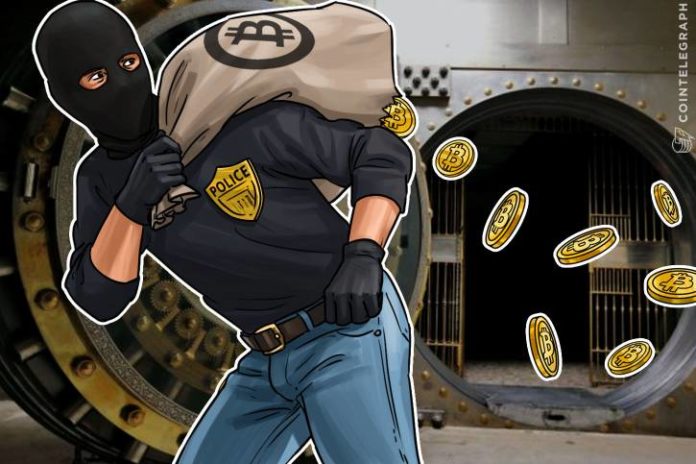 The CID has filed an FIR (police document that predates the beginning of a police investigation) against 10 police officers, including a superintendent of police (SP) and an inspector, for the alleged crime.

Indian businessman and builder Sailesh Bhatt has alleged that on Feb. 9 Central Bureau of Investigation (CBI) officer Sunil Nair first had him beaten, with the help of other cops, in a room at the CBI until he paid a ransom of around $770,000, not specifying in what kind of currency.

Bhatt describes in the complaint how after he was released he was later kidnapped and taken to a farm where he was forced to send 200 BTC (worth around $2 mln at the time) to former business partner Kirit Paladiya:

“They beat me up inside a room and threatened to kill me in a fake encounter if I did not hand over my Bitcoins […] Amreli [city in Gunjarat] SP Jagdish Patel and Amreli inspector Anant Patel were involved. I was forced to transfer Rs 13 crore [around $2 mln] in Bitcoins to Paladiya’s account.”

Local news outlet News18’s coverage of the story writes that the BTC was sent from Paladiya’s wallet, a statement backed up by a quotation from Director General of Police (DGP) CID Ashish Bhatia that there is “no evidence yet of [B]itcoins worth Rs 12 crore [around $2 mln] being transferred from Shailesh Bhatt’s wallet or from the wallet of his business partner Kirit Padaliya.”

Bhatt notes that Paladiya told him that he was under observance by the Indian economic law agency, the Enforcement Directorate, for dealing in BTC, after which he was called in for a meeting with Paladiya and then allegedly abducted in police vehicles. DGP Bhatia has confirmed that government vehicles were used in the abduction.

Bhatt also alleges that Nalin Kotadiya, a former member of the political Gujarat Parivartan Party, was involved in that he pressured him to pay the ransom.

Bhatia referred to the FIR complaint as “a case of abduction and extortion,” adding that they have “formed a SIT that will investigate all the aspects of this case.” Three of the officers reportedly involved have been arrested, and Inspector Patel has absconded.

Different local news outlets have reported the amount of allegedly stolen BTC differently, ranging from $1.8 mln to $2 mln, most likely due to the daily volatility of BTC’s price.

Cases of abductions of cryptocurrency holders for ransom have become more common in the past year, notably in the former Soviet Union. In December 2017, a Bitcoin crypto exchange executive in Ukraine was kidnapped and forced to pay more than $1 mln in BTC as ransom; in January of this year, a Russian blogger who had boasted online of his crypto wealth was beaten and robbed of around $425,00 in fiat; in early February, a man in Moscow was attacked with a knife and forced to send over $1 mln in crypto to his attackers; and in late February, a crypto developer, also in Moscow, was beaten and robbed over over $3 mln in BTC.