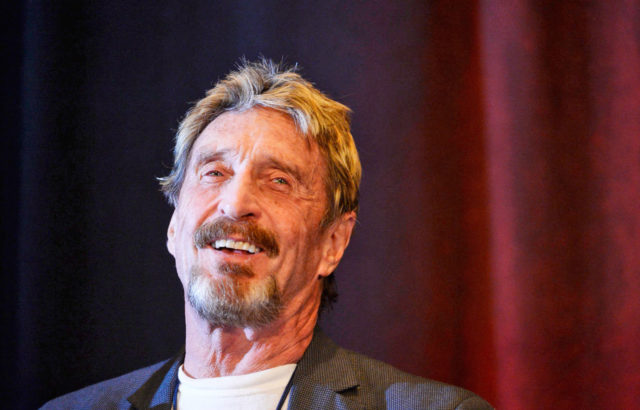 The crypto world was more than amused when anti-virus mogul John McAfee famously said he would consume his own manhood on live TV if bitcoin wasn’t at $1 million by the end of this year. Now it seems he is betting on different digital horses.

BITCOIN IS ANCIENT TECH
There have been plenty of million dollar price predictions for bitcoin, but very few of them for 2020. Crypto warlord, John McAfee, made that one back in mid-2017 when BTC was priced at $2,200.
Since then, bitcoin prices have skyrocketed but they’re still a long way off the predicted seven figures.
In a recent tweet, the outspoken cyber security boss said it was just a ruse to onboard new users. Either way you look at it, it worked and McAfee keeps his manhood.
He added though that BTC was ancient technology, likening it to the Model T, Ford’s first automobile.
“Bitcoin was first. It’s an ancient technology. All know it. Newer blockchains have privacy, smart contracts, distributed apps and more.”

Eat my dick in 12 months?
A ruse to onboard new users. It worked.
Bitcoin was first. It’s an ancient technology. All know it.
Newer blockchains have privacy, smart contracts, distributed apps and more.
Bitcoin is our future?
Was the Model T the future of the automobile?
— John McAfee (@officialmcafee) January 5, 2020

Of course the replies were a collection of what crypto twitter has become these days; toxic tribalism.
An argument on the merits of Ford’s first and current cars detracted a little from the crypto issue and JM’s apparent sudden distaste for bitcoin.
One interesting take is that McAfee may not be dumping bitcoin as some have assumed, but that he sees privacy, smart contracts and dapps being more relevant.
Ethereum is the current standard for the latter two having a larger community and more developers than any of its rivals.
While the platform was not mentioned directly, the opinion was clear and that is BTC will be surpassed by superior tech that offers more. Privacy coin Monero was mentioned, but that too has fallen out of favor around the world over the past couple of years, unless you’re a hacker.
ETH vs BTC … REALLY?
There is no real contest here because both crypto assets do completely different things; additionally neither of them has been adopted as an alternative to fiat yet.
Bitcoin has positioned itself as a safe haven asset and store of value which has been clearly evident in recent days with its mirror of gold and oil rallies on escalating geopolitical tensions.
Ethereum is a smart contract and dapp platform that is positioning itself as a foundation for decentralized finance (DeFi).
There is plenty of room for both.
John McAfee may have just saved his johnson by welching on his original bet, but he’s undoubtedly lost a few crypto fans and some credibility in the process.
Will bitcoin be surpassed by a superior blockchain? Add your thoughts below.