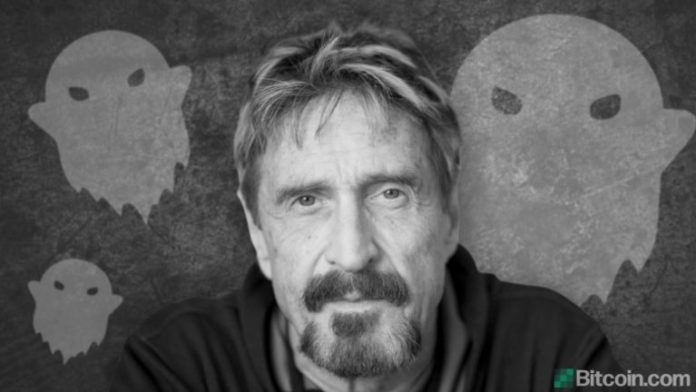 John McAfee announced Tuesday the launch of his new product called the “Ghost Cell Phone Data Service,” which he described as “the first 4G data service to make connections to the network untraceable.” Beta testing began on July 3 and the global launch of the service is planned for September.

The Ghost by McAfee website explains that subscribers will be “invisible,” as “All traffic passes through multiple anonymized servers and cannot be traced back” to them. No SIM card is required as the service uses eSIM technology that allows data connections on a smartphone without a physical SIM card. The “app will offer base layer VPN protection for your phone, encrypting any data you send over our network.” The website currently lists 37 supported countries but McAfee tweeted an additional 16, making the total number of supported countries 53 at press time. Tuesday’s announcement details:

McAfee described: “the Ghost brand will encompass a range of practical, real world tools for people to protect our rights and take back our privacy. Privacy is a human right.” The Ghostx exchange went live on Jun 21, following the launch of McAfee’s Ghost cryptocurrency, a proof-of-stake privacy coin.

The service is data-only but will support VOIP and other IP based communication platforms. It will be compatible with “most of the latest flagship phones,” the announcement adds. “Support for more phones will be added as eSIM technology gets added to mid-range and budget models.” Supported phones currently include a few models from Google, Samsung, and Apple’s iPhone.

To use the data network, scan a QR code supplied after purchasing the service using a supported phone. The announcement adds: “No personal information is required for sign-up and all service is prepaid with no contract. The service includes a free app available for both Android and iOS that further enhances data protection and privacy.”

What do you think about McAfee’s Ghost cryptocurrency and other services? Let us know in the comments section below.