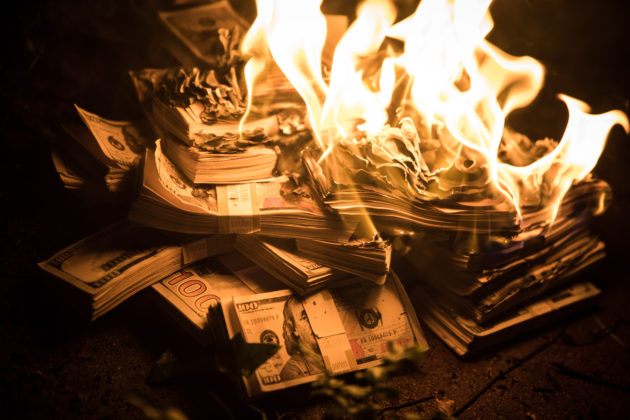 Like other altcoins, XRP has rallied against Bitcoin over the past few days.
While the leading cryptocurrency has stalled in the low-$9,000s, XRP has begun to push past the psychological resistance of $0.20. Even after BTC retraced by 3% from its local highs, the altcoin remains above $0.20.
Some believe that this breakout is a signal of an even greater rally. Yet a crucial time-based indicator that last appeared before XRP began a decline in April has just been spotted again.
XRP Could Plunge Against Bitcoin, Analysts Agree
According to a Telegram channel tracking cryptocurrencies and traditional assets, a textbook bear signal just appeared on the chart of XRP against Bitcoin.
The signal in question is a Tom Demark Sequential “9.” The Tom Demark Sequential is a time-based indicator that often prints “8,” “9,” and “13” candles when an asset has reached an important inflection point in its trend.
The green “9” that just appeared suggests that XRP is at a local top against Bitcoin, and will thus suffer a retracement.
Chart of XRP’s price action and TD Sequential indicator by the Telegram channel “Alerts – TD 9’s and 13’s.” Chart from TradingView.com
Last time this signal was seen in April of this year, the cryptocurrency proceeded to drop by 35% against Bitcoin.
The textbook signal is not the only thing or person predicting a retracement in the asset.
Long-time commodities analyst and BTC bull Peter Brandt said earlier this year that XRP is primed to drop 90% against Bitcoin. He shared the chart below, attaching the following comment:
“Looks like Ripple Labs has blown the wad allocated to support XRPBTC at .00002060 to .0002075 levels. If ice-line cannot be reclaimed, look for new support at .0000194 on way to .0000145. Hey, I’m just a boomer who hates XRP.”
XRP/BTC analysis by trader Peter Brandt (@PeterLBrandt on Twitter). Chart from TradingView.com
In previous statements, Brandt said that he is against “99%” of altcoins. The investor said that “99% of other cryptos will be forgotten five years from now,” remarking that only projects like Ethereum and Litecoin have a potential future.
While not predicting an exact price point XRP will reach, a crypto fund manager and researcher, Simon Dedic, said that he thinks the asset will leave the top 10:
“$XRP, $BCH, $BSV, $LTC and $EOS absolutely do NOT deserve belonging to the TOP 10 cryptocurrencies. Actually can’t wait until they vanish and clear the way for solid candidates. Actually can’t wait until they vanish and clear the way for solid candidates.”
Anti-Altcoin Sentiment Grows
The XRP bear case comes as anti-altcoin sentiment has once again become prevalent.
Jason Williams, a partner at Morgan Creek Digital, recently said on investing in altcoins:
“People sell BTC to buy alt coins and straight s**t coins. I think that is super risky. I am sure, if real honest historical analysis was done, it would show holding is a superior strategy. Just as single stock pickers are losers over those that use an index. IMHO.”
The premise of his comment is that holding Bitcoin may be a better long-term strategy than attempting to make a few percent here and there by speculating.
Featured Image from Shutterstock
Price tags: xrpusd, xrpbtc
Charts from TradingView.com
Last Time This Signal Appeared, XRP Dove 35% Against Bitcoin. It’s Back

Chinese authorities have seized cryptocurrencies worth about $15 million while bringing down a scam involving fake Huobi tokens. In addition,...