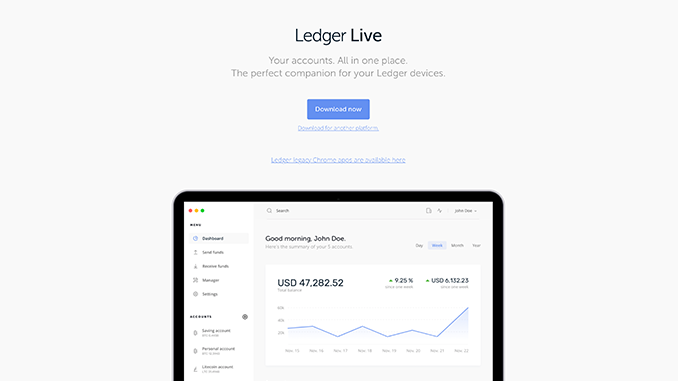 The manufacturer Ledger, which produces the popular hardware wallet Ledger Nano S, today released a new software for the hardware wallets. The awkward use of Chrome Apps falls away with it. Also, it is no longer necessary to use multiple apps. Everything can now be made out of a program.

Just a few months ago, Ledger announced that they wanted to release new software for the popular Ledger Nano S and Ledger Blue hardware wallets. So far, the use of hardware wallets via Google Chrome Apps. This was very cumbersome because users ultimately had to install several apps to use the ledger. So there was the Ledger Manager, with which apps could be installed on the ledger and then there were 3 Google Chrome Apps, with which the crypto currencies could be managed.

All together, Ledger Live has now come together in a single app and released today. There is no need for Google Chrome anymore to use the program. Anyone who already has a Ledger Nano S (or Blue) can easily download the new software. If you are already using the ledger, you can specify during the installation that this is an initialized ledger. This leaves all apps on the ledger and you can then continue to use it normally.

If you want to install more cryptocurrencies on the ledger, you can do that under the item “Manager”. All functions of the former Ledger Manager are displayed there.

Overall, the operation of the Ledger Nano S (and Blue) has become much more intuitive and easier for beginners.

If you do not have a Ledger Nano S you can order it directly from the manufacturer. The Hardware Wallet is the safest way to keep your crypto credits. Even if you lose it or it gets stolen, you can easily restore it.