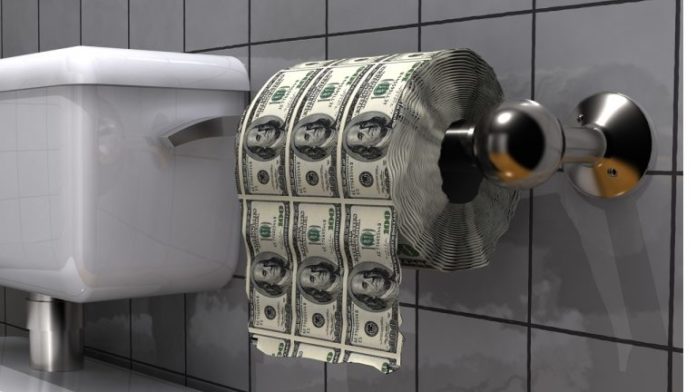 During the last three months, the U.S. Federal Reserve has created a system of monetary avarice, as the central bank can literally do whatever it wants with zero oversight. The American public recently witnessed the Fed’s announcement on Monday, which explained the central bank will be buying individual corporate bonds on a regular basis. Moreover, the Fed’s insidious stimulus and monetary easing will not be ending any time soon. Federal Reserve Chair Jerome Powell said that America’s economic recovery requires the virus “being under control.”

Using the coronavirus as an excuse to cunningly hide the fact that the Federal Reserve’s monetary schemes were imploding months before the first U.S. Covid-19 death, has worked out well for the central bank. After the creation of trillions of dollars that went into the hands of today’s top financial incumbents, and only a small fraction of that money distributed to American citizens and small businesses, the Fed continues its schemes.

On June 15, 2020, the U.S. central bank told the public that it would start buying individual corporate bonds. This was after the Fed had already started purchasing exchange-traded funds (ETFs). It doesn’t matter if the products being purchased are considered “junk bonds” or “junk indexes” or if the corporation made severe mistakes. The Fed has the ability to bail out any failing corporatist or any corporation on a whim.

The announcement is part of an effort that allows the Fed to make massive purchases via the Secondary Market Corporate Credit Facility. Under the new provisions, the Fed can purchase roughly $250 billion in corporate debt from eligible issuers. Additionally, the Fed has been granted the ability to siphon around $25 billion from the Treasury, funds that were issued in the recent CARES Act. The senior macroeconomist at the firm MacKay Shields, Steven Friedman, called the move a far less “passive approach” on the Fed’s behalf.

“The decision to buy a broad portfolio of corporate bonds represents a shift to a more active strategy for the secondary market corporate credit facility, rather than the passive approach originally envisioned,” said Friedman. “[An aggressive individual bond-buying scheme] may also reflect the Committee’s view that the economic recovery from the ongoing Covid-19 crisis will be an extended and challenging one, with credit markets requiring extensive support,” Friedman conceded.

Additionally, the Fed also launched the “Mainstreet Lending Program” on Monday as well. This scheme was created so financial incumbents can offer loans to “small and medium-sized companies” that meet the lender registration criteria. The Boston branch of the Fed will be the main purchaser of these types of loans, and it will allow purchases of up to 95% of the Mainstreet Lending Program’s debts. Of course, Federal Reserve Chair Jerome Powell is blaming all the Fed’s current schemes on Covid-19.

“Until the public is confident that the disease is contained, a full recovery is unlikely,” Powell recently explained in a testimony to the Senate Banking Committee. “The longer the downturn lasts, the greater the potential for longer-term damage from permanent job loss and business closures,” Powell further stressed.

Most of the mainstream media outlets have been brushing the Fed’s moves under the rug or simply leveraging Covid-19 as an excuse for the massive bailouts. However, Pam Martens and Russ Martens from the publication, “Wall Street on Parade,” have been diligently exposing the Fed’s manipulation and fraud for years.

On June 10, the duo revealed how the “Federal Reserve had authorized 11 financial bailout programs thus far.” Continuing the Martens added: “Despite Fed Chairman Jerome Powell’s reassurances at his press conferences that these programs are to help American families, a full 10 of these programs are actually bailouts of Wall Street banks or their trading units.”

Moreover, the massive quantitive easing (QE) tactics have been limitless as the Martens have reported to the nation’s public that the “Fed’s repo loans to Wall Street skyrocketed by 230% week over week.”

None of these dollars are funneling or ‘trickling down’ to the common American, and 95% of the funds are given to private banks and corporate friends. “Between Monday and Friday of last week, the Fed made $304.20 billion in repo loans to Wall Street’s trading houses,” the Martens revealed. “That was 230 percent of what it made the week before and 700 percent of what it loaned the week before that.” The Wall Street on Parade duo added:

This would suggest that the liquidity crisis is heating up and/or that it’s taking ever larger amounts to levitate the stock market as sellers come back in.

The Fed’s moves have invoked a new spirit toward precious metals like gold and digital assets like bitcoin. Simon Peters, a market analyst from Etoro believes that the Fed’s recent moves during the last few weeks have primed bitcoin as “an inflationary hedge.”

“The fundamental case for bitcoin continues to improve,” Peters said in a note to investors on June 15, 2020.

“In its meeting last week, the Fed indicated continued stimulus and gave a dreary outlook for the U.S., and, by extension, the global economy. All of this is against a backdrop of what was a rapidly rising market that seemed to be defying logic,” Peters said. “Much of the growth we’ve seen recently has been driven by a small number of firms, such as the FAANG stocks, Facebook, Amazon, Apple, Netflix, and Google, which make up massive percentages of the U.S. indices. However, this rally seems to have run out of steam, as investors realise that the worst of the pandemic isn’t over yet and consumers aren’t returning to spending in droves.” Peters continued by adding:

Combine the overvalued stock markets with central bankers’ persistence in quantitative easing and fiscal stimulus and the potential for the developed markets to enter an inflationary environment is very much on the cards. Bitcoin was designed as an inflationary hedge and if we’re moving towards this new normal of high inflation, this could be the spark we are looking for.

What do you think about the Fed’s moves to purchase individual corporate bonds? Let us know what you think in the comments section below.