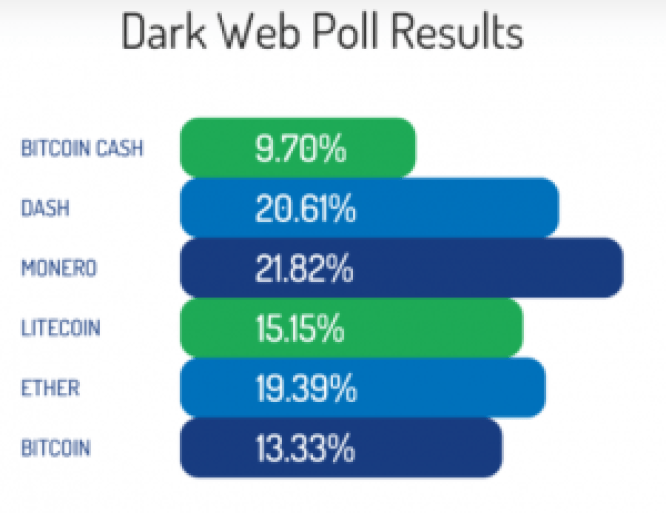 Litecoin (LTC) – Dark web was one of the main reasons to make Bitcoin as notorious and valuable as it is today. It was in Dark web that Bitcoin initially found a foothold and gave people the opportunity to make fast and simple transactions on any kind of market. The owners of sites like Silk Road also saw the adoption of Bitcoin and this emerging technology – Blockchain – as a great opportunity to trade any type of goods and services (legal or illegal) thanks to its different properties and characteristics.

But, as we all know, Bitcoin turned mainstream really fast in the last year, even on national television in wide variety of countries we were able to see people talking about Bitcoin, if it was safe, that it was a Bubble and a lot of different arguments from people who probably didn’t even knew what Blockchain Technology is. With that chain off events, entities started to work on ways of tracking transactions through the public ledger, and that, tied with the KYC and AML laws, which took away from the individuals one of the main assets of using cryptocurrencies- their privacy.

Due to this reason and also the fact that Bitcoin is not the fastest and cheaper coin to make transactions with, individuals started to turn their gaze to other cryptocurrencies that can carry out these privacy and speed purposes. So this brought a great increase on some coins volume of trades and also general interest. Alt-coins like Monero, Dash, Verge and Litecoin were some of these coins who grew thanks to the break of trust in Bitcoin.

Monero (XMR) had the biggest percentage of usage for some time

So, Bitcoin had to be replaced and trough the search of the most suitable cryptocurrency Monero started to gain traction and popularity. Of course, in such terms this is a change that doesn’t occur from day to night, but in a matter of months Monero (XMR) found itself owning 21,82% of Dark Web transactions. Going over coins like Dash, Litecoin (LTC), Ethereum (ETH) Bitcoin Cash (BCH) and also Bitcoin itself.

But, in a fast pace, concerns in terms of privacy and anonymity also rose in Monero’s usage. These two flaws started to be studied and a recent paper shows how the mixing aspect of Monero is flawed. Observers can identify some of the decoys and figure out the amount of coins being spent. An aspect that inside the Cryptoverse, especially in the Dark web, is a major problem.

Also, the timing of transaction being addressed was another flaw. Previous timing analysis successfully identified the real coin transaction in 90% of the cases. Another big problem to worry about, even so identifying transaction recipients is impossible, the initial sender can be highlighted.

The Rise of Litecoin (LTC)

When the Dark web community understood that Monero was no longer the best option for their transactions, again they had to turn for different options. And surprisingly, Litecoin earned their trust.

I say surprisingly because this doesn’t make much sense in terms of privacy, since Litecoin was not made to be a privacy coin, Litecoin was simply a fork of Bitcoin. The only advantage Litecoin can bring to this matter its cost savings.

Litecoin’s privacy or cost savings gave it the power to rise from the middle of all the other Alt-coins and find itself owning around 30% of Dark web transactions. Which is a major rise in comparison to the 15,15% it had before.

How will this turn out?

As I said before, this can only be surprising since people backed away from Monero when they understood it had privacy problems. But, Litecoin was never a great asset for its privacy, it was always a transparent coin.

With all that being said, I cannot rest assured that this momentum will last forever, because it is hard to believe that the costs saving people are making on Litecoin will keep it has the number one on the polls.

Until today Litecoin has not proved to have interest in making privacy implementations. It is a coin listed on Coinbase, an Exchange that is proud of their transparency and compliance with regulators. So, regulators would not be happy if Litecoin would announce a privacy-based update.

We can only expect an interesting competition between Litecoin and the other non-Bitcoin currencies on the run for the number one spot on Dark web transactions. But while Litecoin keeps owning this kind of percentages their Market cap doesn’t stop growing, which is amazing for all their owners.