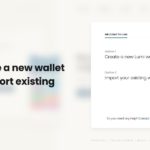 LUMI Wallet, a wallet to buy, store & exchange cryptocurrencies, has announced that starting on September 15th, their users who speak German, Italian, French, or Spanish can use the web wallet in the listed languages.

According to the Lumi Wallet team, before the end of this year, more than 10 other languages will be available on the web and mobile wallet.

The decision to add new languages to the web version of the wallet is one step on the way to Lumi Wallet’s development and spread around the world. Right after launching the white-label program, Lumi took the direction of its product adoption around the world. This means that in the near future, we will see more collaborations and actions regarding brand development, including more language adoptions in the app.

“We see how fast the cryptocurrency market grows. 3 years ago we said that the main concentration of digital currency users and the main crypto space development was in the USA. Now, from various statistics and our users’ locations, in particular, we see that that situation has changed. 3 years ago, 90% of our users were from the US, today we see that this amount has decreased to 70% and more and more newcomers are from different countries around the world. A lot of African and Indian users have joined our community in the last year and according to Lumi Wallet politics, we should be able to respond to their interests. We will continuously adapt our website, mobile, and web wallet to different languages.”

Lumi Wallet was released in 2017 and has been constantly evolving ever since. It is a non-custodial, open-source, private wallet that has Android, iOS, and web versions. Lumi supports BTC, BCH, ETH, EOS, Tether USDT, Binance USD, Paxos Standard Token, Celsius, Dai, and more than 1,200 ERC20 tokens. It allows customers to store, buy & exchange cryptocurrencies.

The wallet’s team is active on Twitter and Telegram, also Lumi has a lively blog. If you have some suggestions for currencies the wallet needs to add, or just want to say hi – don’t hesitate to send an email to [email protected].