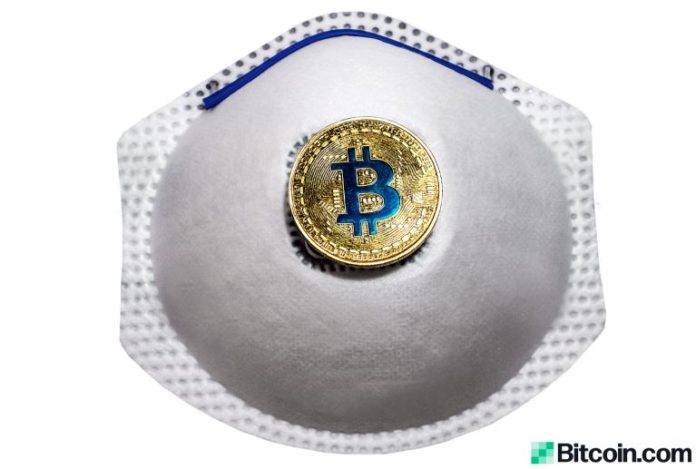 A lot has changed since the coronavirus pandemic swept the globe as it has caused a wide range of negative effects on the world’s economy. On March 30, the blockchain surveillance firm Chainalysis published a report that shows how the cryptoconomy is faring from merchant acceptance to gambling, and darknet purchases as well. The researcher’s study highlights that the covid-19 environment has “brought about a significant change” by impacting crypto-based spending habits.

On Monday, the blockchain forensics company Chainalysis published a research report that shows the correlation between bitcoin’s price and spending BTC with merchant services, gambling sites, and darknet markets. Statistics from Chainalysis shows that all three spending types “dropped significantly since March 9.” Covid-19 has had an adverse effect on crypto spending and even though the spending habits declined it was in a way that Chainalysis researchers did not expect. The firm says that it is understandable that during an economic crisis, spending usually drops but the company has found that the price of bitcoin is “correlated with daily Bitcoin receiving activity for the services we’re analyzing.”

“Meaning, the amount of bitcoin customers send to those service types in a given day — both before and after covid-19 reached North America,” the Chainalysis report adds. “The level of correlation has changed for each of the service types we’re looking at. For darknet markets, revenue has become more correlated with bitcoin’s price, meaning darknet markets have seen unexpectedly steep revenue declines since bitcoin’s price began to drop.” This is especially interesting considering darknet markets’ revenue previously had a small but significant inverse correlation with Bitcoin’s price, meaning we would have expected darknet markets to have slightly higher sales after the price drop. Merchant services and gambling providers, on the other hand, have seen their revenue to Bitcoin price correlation drop, meaning they’ve proven more resilient and seen less of a revenue decrease than expected. The Chainalysis researchers remark that even though merchant services purchasing dropped, the correlation between spending with merchants fell by 50%. Chainalysis also found that the downward trend in gambling activity appears unrelated to the bitcoin price drop.

“After all, wouldn’t regular users gamble more if they’re shut in their houses all day?” the company’s blog post asks. “That doesn’t appear to be the case thus far though.” The most interesting part of the Chainalysis report is the statistics concerning darknet market (DNM) sales. According to the blockchain surveillance company, DNMs reacted to the price of BTC like “never before.” “The effects of the covid-19 price drop on darknet markets are especially interesting. Historically, darknet markets’ revenue has had a weak inverse correlation with Bitcoin’s price,” Chainalysis wrote. “Perhaps darknet market customers aren’t buying as many drugs given the public health crisis. It’s also possible that vendors slowed down sales during the price drop, out of fear that the Bitcoin they accept one day could be worthless the next,” the study further said.

Chainalysis concludes by saying that the usage patterns were not normal and it was definitely caused by a black swan event. “The question for cryptocurrency businesses is whether or not they’ll be able to return to their previous transaction levels and if their customers’ usage patterns will return to normal as both bitcoin and the economy itself recover,” the report concedes.

What do you think about how covid-19 has effected crypto spending? Let us know in the comments below.