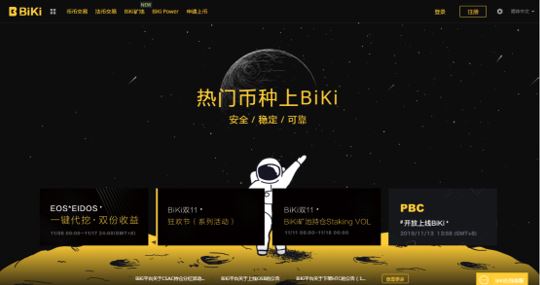 26th November, 2019, Singapore – Digital assets trading platform BiKi.com has recently undergone a revamp of its official website and app, with a completely new user interface, the first steps in its rebranding and upgrading efforts.

Sporting a new color tone for its logo, BiKi has adopted a warmer and more vibrant yellow, in contrast to its earlier cool blue hues. According to the exchange, this change in palette signifies “more vitality and hope” and users can expect a more dynamic platform with correspondingly more vibrant services.

The backdrop depicts a vast and unknown universe with the implication that BiKi will extend into these unexplored and unchartered territories of the industry.

Officially launched in 2018, BiKi.com has been around for a year and three months. Within this span of time, the exchange has managed to accrue 2 million registered users worldwide and 130,000 daily active users, ranking amongst the best exchanges on CoinMarketCap and Feixiaohao.

According to data from Feixiaohao, the average daily transaction volume of BiKi has reached USD 1 billion (compared to USD 5 billion on Huobi Exchange), quite a feat considering it was achieved in only a little over a year. Traditional business infrastructure or practices have not held back the young exchange who has consistently demonstrated bravery in the areas of change and innovation.

A New and Complete Ecosystem

BiKi’s business ecosystem has evolved over the preceding months.

In addition to the basic exchange services, the platform has launched new features such as the BiKi Mining Pool and the BiKi Innovation Zone, in response to its community demand for derivatives.

Before that, BiKi established the BiKi Research Institute, led by BiKi founder, Winter, and also a Supervisory Committee. The institute will conduct in-depth research on apps and also the future developments in the blockchain industry. Next in the pipeline will be the setup of an industry fund as well as a project incubator.

BiKi’s strategy of meeting new challenges with a fresh new look and attitude sums up the comprehensive upgrade.

Taking a year to rise in the fiercely competitive exchange rankings to first-tier status has been an uphill battle.

The rise of numerous smaller tokens this year have taken place outside of first-tier exchanges. This ‘asset diversification’ has actually worked in BiKi’s favor, propelling it to the position of a front-line exchange. Meanwhile, the catchphrase “The popular token’s choice” has been meticulously imprinted in the minds of investors and projects these past months.

While exchanges get a lot of attention and users when a project scores a TenX (tenfold increase), if it can offer no other value propositions, users will start voting with their feet and the exchanges will eventually lose their user base.

It is thus crucial to be forward-looking and innovative to guarantee sustainability. From hot assets to the BiKi Innovation Zone, to the BiKi Mining Pool, to the BiKi Research Institute, to the Supervisory Committee, BiKi.com does not stop. Despite such endeavors consuming a lot of manpower and financial resources, BiKi considers these moves as insurance against losing its users to other exchanges in the event of an exchange melee.

In an industry that has no shortage of once-popular exchanges falling from grace, BiKi has adopted the stance that not advancing means retiring. Constantly innovating and researching new industry insights to break the ceiling remains a priority for the exchange.

Other examples of innovation include its policy of using 100% of its platform fees in the buyback of the BIKI platform token, a move unprecedented for exchanges but which has since been copied by smaller exchanges, as well as the quarterly burning of the platform token. This policy prioritizes platform users, indicative of the exchange’s focus on its users.

In line with its globalization initiatives, the exchange is expanding its business and operations center globally. It has implemented an overseas strategy of ‘localization after globalization’ successfully in several major countries so far.

A Summary of the Past; A Starting Point for the Future

BiKi’s brand upgrade can be considered a summary of all its past goals and endeavours while it positions itself for the future journey forward.  The rapid pace of innovation and expansion continues at BiKi with new features: leverage, contract and lending will be launched in the near future.

With its current brand upgrade covering multi-dimensional aspects – strategy, product, service, user experience etc., users can certainly look forward to plenty of surprises from the new ‘ready-to-wear’ BiKi. Yet despite the myriad changes, at its heart, the core focus on being user-oriented remains a constant.

Headquartered in Singapore, BiKi.com is a global cryptocurrency exchange ranked Top 20 on CoinMarketCap. BiKi.com provides a digital assets platform for trading more than 150 cryptocurrencies and 250 trading pairs. BiKi.com is focused on providing the safest, most stable and most effective cryptocurrency trading platform. 100% of the transaction fees are used in buyback and burning of platform token, BIKI. Since its official opening in August 2018, BiKi.com is considered one of the fastest-growing cryptocurrency exchanges in the world with an accumulated 2 million registered users, 130,000 daily active users, over 2,000 community partners and 200,000 community members. BiKi.com has received investments from Huobi co-founder Du Jun, Genesis Capital Zhu Huai Yang, FBG Capital, ChainUP and others totaling approximately 10 million USD.