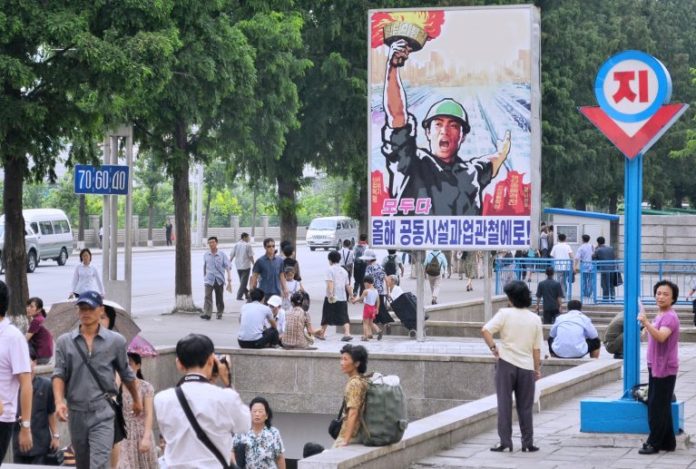 A North Korean official claims that a Democratic People’s Republic of Korea (DPRK) cryptocurrency is on the horizon. According to a delegate for the Committee for Cultural Relations, Alejandro Cao de Benós, the country plans to forge a token backed by a physical commodity like gold and the digital asset’s main purpose will be used to bypass U.S. and international sanctions.

Also read: Snowden: US Seizing My Book Revenue is ‘Good for Bitcoin’

Another nation state is in the midst of creating a digital currency but the North Korean cryptocurrency idea is intended to work in parallel with the local Korean won. Alejandro Cao de Benós, a member of the DPRK Committee for Cultural Relations and President of the Korean Friendship Association, told various news outlets this week that a DPRK token is in the works. Between April 18 and 25 of this year, North Korea held a cryptocurrency and blockchain conference which saw around 100 attendees in Pyongyang. Immediately after the event wrapped up, rumors of the North Korean government creating a digital currency made mainstream headlines. News publication The Diplomat reported that early clues also started arising in September 2017 when Kim Il Sung University released a report on the importance of digital currencies. Moreover, The Diplomat columnist Tae-jun Kang said that the conference itself and the DPRK token announcement was a signal to other nation states like the U.S.

“According to several Seoul-based North Korean experts, who believe the latest cryptocurrency conference in Pyongyang was designed to send out a warning message to the United States and the international community that it can overcome sanctions by utilizing digital currencies,” Tae-jun Kang wrote in April 2019 after the conference in Pyongyang.

Now Alejandro Cao de Benós is speaking on the subject with a few select news outlets this week and has told reporters that a DPRK token is being built. Speaking with Vice journalist David Gilbert, he said the digital token North Korea is constructing is still in its nascent stages, but clearly emphasized that the cryptocurrency was made to bypass strict U.S. and international sanctions. However, the new coin created by the North Korean government will not be a digitized version of the Korean won. “[It will be] more like bitcoin or other cryptocurrencies,” Cao de Benós told Gilbert during a phone conversation. The North Korean diplomat added:

We are still in the very early stages in the creation of the token. Now we are in the phase of studying the goods that will give value to it.

Alejandro Cao de Benós has also spoken with the reporter Ben Muster from Decrypt and given a greater insight to the DPRK token. In the interview, Cao de Benós highlighted that North Korean citizens would still use the Korean won and that the new blockchain assets would be used by “banks and companies.” The concept of the DPRK token is different to China and the PBOC’s alleged digital yaun construction and the idea resembles Venezuela and Maduro’s petro cryptocurrency. There have been multiple reports detailing that average Venezuelan citizens don’t even use the petro and that the digital currency is mainly used by government officials and their friends to skip out on U.S. sanctions. Moreover, similarly to the DPRK token concept, Maduro didn’t replace the sovereign bolivar either, and the petro runs parallel with the local tender and is allegedly backed by oil and gold reserves.

During Cao de Benós’ interview, he claimed that the country was developing a digital asset that’s “based on something with physical value — in the international market.” The representative also said that the crypto needs to bolster a “more stable price for international settlements, between DPRK and other companies/individuals.” The columnist Ben Muster said that he reached out to DPRK officials but “requests for comment from the North Korean government went unanswered.” When reporter David Gilbert called North Korea’s Embassy in New York, the office said they could not verify Cao de Benós’ claims. “I am not in a position to give you an answer,” the North Korean Embassy spokesperson stated.

On September 9, Cao de Benós announced the next Pyongyang Blockchain and Cryptocurrency Conference which will be held in February 2020. Just like the last event, the conference will be very exclusive but Cao de Benós has said the event will be much larger this year. Also, attendees will get a chance to visit Panmunjom in the Demilitarized Zone between North and South Korea and Kim Il Sung University as well. Just like the prior Pyongyang crypto conference, there will be restrictions for members of the media and citizens who reside in the U.S., Israel, South Korea, and Japan. It’s likely more information will come from the next conference in regard to the purported DPRK token. There’s been multiple reports in the past of North Korean’s gathering technical knowledge on digital currencies like bitcoin. Last week someone asked Cao de Benós if DPRK residents were allowed to hold digital assets and Cao de Benós replied:

Yes, we even have programmers that are designing crypto wallets and other related apps right now.

Venezuelan officials from Maduro’s regime have been very friendly with the North Korean government as well according to pictures Cao de Benós shared last August. The Venezuelan government opened an embassy in Pyongyang and Cao de Benós said “surely this diplomatic advance will be very useful in the defense against the imperialist invasion.” Just like Venezuela and Iran, North Korea has had issues with the U.S. for quite some time. However, with North Korea under Kim Jong-un’s rule, the country has had problems with many international bodies since holding its first nuclear test in 2006. The U.S. and a number of countries have imposed economic sanctions against the DPRK and it is hard for the region to do business with people and organizations overseas. As the popularity of bitcoin and cryptocurrencies has increased, it seems that North Korean officials have begun to appreciate how this technology can be used to bypass financial blockades and borders.

Did you know you could win big with Bitcoin gambling? Choose from a range of BCH games including BCH poker, BCH slots, and many more. All games are provably fair—good luck!