Coni will be listed on CoinBene at 11:00 am on June 18 ,2018. featuring Coni/ETH. According to official , there will be 40% trading fee as rewards monthly to anyone who hold Coni .And you can also have the privilege of discount in trading fee (70% discount at top). Multiple airdrop and dividend will be released  before and after Coni is online .For more information ,please pay attention to CoinBene official website.www.coinbene.com.

CoinBene Token (the “Coni”) is a crypto-token developed by the CoinBene exchange. has a strict total volume of 1 billion, which will be created and never increased. Coni will run on the Ethereum blockchain with ERC 20.

Team held: This budget will be used in the following platform features development, research supports, technical maintenance and upgrade of CoinBene, which include performance bonuses for team members and research funds.

Airdrops for Participants: This budget will be used to rewards participants in various activities.

CoinBene Funds: This budget will be used for unpredictable expenditures.

40% of the net profit of the platform is used to reward Coni holders in 8th of each month such as the first reward time is July 8th and so on. Based on developing of CoinBene, the monthly rewards will be replaced by weekly rewards.

Coni holders will be expected to enjoy the exclusive discounts of trade fee, the more holding amount, the bigger discounts, with 70% off in maximum.

Every new project need to deposit a number of Coni tokens based on market value to a listing guarantee with 10 months reserved period. The guarantee deposit will be refunded in 1st of each month and the proportion of refunds is 10% of the guarantee deposit until all of them.

As platform develops, CoinBene will adopt ‘Voting to listing’ model.

With the acceleration of globalization, CoinBene will select global partners. In addition to other requirements, the partner is expected to deposit a number of Coni tokens based on market value to a cooperating guarantee.

CoinBene will release Coni public blockchain, meanwhile the global business process will be managed on blockchain and the application of Coni will extend in the future.

Since CoinBene official website has launched in November 20th 2017, the number of daily pageviews (PV) increased with an accelerated speed and total monthly pageviews were over 300,000. The registered users over 10,000 in the first month and over 1.5 million until now. 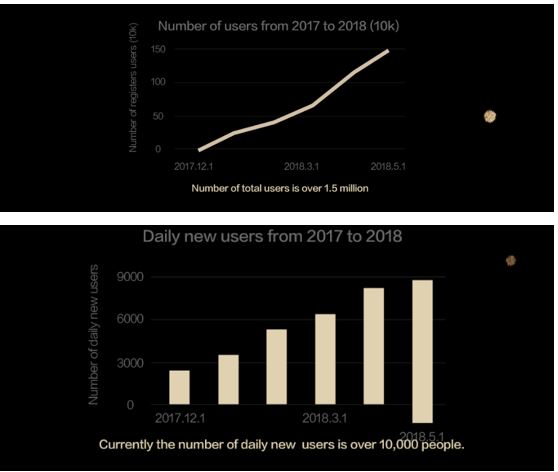 Since CoinBene has operated, there are over 1.5 million users who registered and traded just within the first 6 months with maximum 60,000 daily active users and brought about over 0.2 billion USD.

Following the aim of “Foothold on China, eyes on the world”, on May 2018 we opened the Brazil office which symbolized CoinBene developing into Brazil market officially, meanwhile CoinBene will open the global process to expand more offices in many countries, such as Malaysia, Mexico, Middle East, Philippines, Cambodia, Europe, India and South Korea.

The main team members are coming from well-known internet and fintech enterprises like OKCoin, Baidu, Meituan, JP Mogran. They have rich experience in the establishing digital currency platform, trading logic, financial risk control, user operation system and other fields. Both of Brazilian, Malaysian and Mexican team have superior technology and business capabilities.