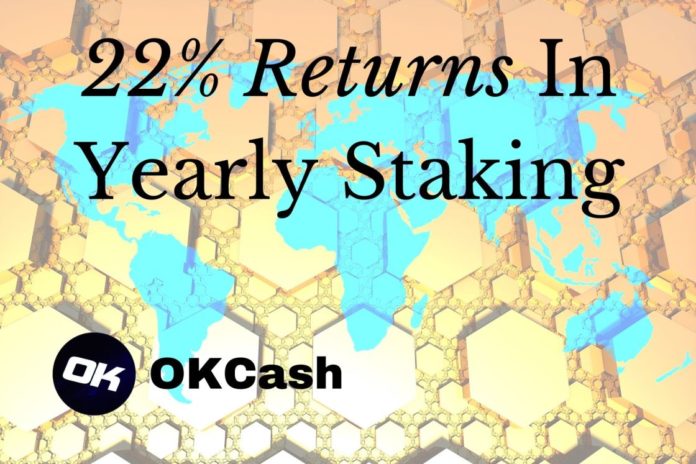 While there are many Proof-of-Stake (PoS) blockchain and cryptocurrency projects in the market, only a few legit players like OKCash have remained true to their word of giving handsome staking rewards and returns to their members.

The OKCash block staking/mining rewards changed at the block number 2,526,285 as per the official announcement. For the next year, OKCash has announced an increase in its staking rewards at 22%.

Till August 2021, OKCash cryptocurrency holders will continue to receive a block staking reward of 22%. Post that, the staking rewards will reduce to 11% as per the scheduled plans.

The 22% reward at a time of global economic uncertainty is expected to uplift the mood of investors.

These developments are part of the project’s continued growth since its inception in 2014. Furthermore, it also reflects the trust and confidence within the OKCash community.

The recent developments with OKCash has attracted several cryptocurrency enthusiasts to the platform. The popularity of the platform is consistently increasing as the network growth continues to accelerate.

Almost 75% of the OKCash network has already been updated to the new version of the wallet, as per the official announcement. Moreover, there are over 28 million OK Coins available for staking. This indicates OKCash’s growing network strength with time.

As per the project developers, decentralized OKCash (OK) cryptocurrency also caters to the next-generation innovation and technological developments towards Internet of Things (IoT).

To run an OKCash cryptocurrency node, one doesn’t need to be overwhelmed. Using the Rokos OS, users can run a full-node Bitcoin client or an OKCash (OK) client.

The Rokos Core is a disk image for the Raspberry Pi mini-computer, that turns a single-node computer to a full-fledged OKCash node. The system allows users to hold the OKCash wallet as well as mine, send, and receive OK coins over the network.

Note that the original Bitcoin Core network runs on the Proof-of-Work (PoW) algorithm where miners compete with each other to add new blocks in the Bitcoin network.

For every block mined, the miners receive some BTC as miner rewards. However, Bitcoin’s mining algorithm also becomes more and more complex by adding new blocks.

It then requires high-end energy-consuming hardware to mine fresh blocks leaving no scope for new miners.

OKCash has decided to adopt the more energy-friendly, and more decentralized PoS model giving equal opportunity for everyone to participate.

The open-source OKCash blockchain works on a long-term sustainable staking model that is efficient. The blockchain has a confirmation rate higher than most of the digital currencies offering faster speed and lower cost.

Using the OKCash wallet, users can easily send, receive, and store their OKCash cryptocurrency. The wallet is simple to use and users can choose to send and receive OK payments or secured messages from their wallets.

With its PoS staking model, OKCash has seen sustained growth over a period of time. Since the project is decentralized and open-sourced, users get complete control over their OKCash investments. It also means that the ecosystem is open for any member to participate.

A Wall Street veteran is warning the “biggest cobra effect in the history of economics” is about to hit the...