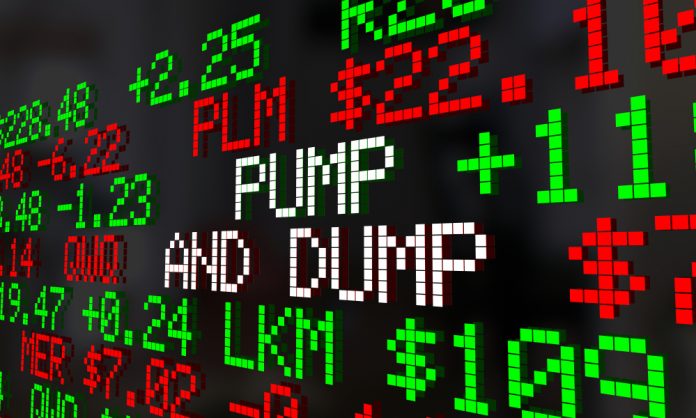 Who does not know that? On the crypto market, some shitcoin that no one on the screen had before suddenly goes through the ceiling for no apparent reason. As soon as you start to find out more about the coin (maybe it’s a project with substance?), You can see the course slip into the red again at the corner of your eye. This FOMO-causing course is usually based on a mendacity.

This coinage is called Pump and Dump.

A pump and dump is about deliberately and co-ordinarily raising a price (“pumping”, inflating) so that the asset can be sold again immediately after the highest level has been reached (“dump”) , unload). Although pump-and-dump schemes are significantly older than Bitcoin & Co., they are particularly fertile in crypto-space. And that, although primarily the initiators of the pump and the dump profit.

In their paper “The Anatomy of Cryptocurrency Pump-and-Dump Scheme,” Jiahua Xu and Benjamin Livshits have further researched this form of market manipulation. They have found that comparably simple machine learning models can make useful predictions about which coin a pump is facing. Between July and November 2018, they watched over 220 pump and dumps.

Typical process of a pump and dump

The authors note that most pump-and-dump activities are coordinated via the Messenger Telegram. To this end, the initiator or initiators first establish a telegram channel and try to attract as many participants as possible. Xu and Livshits call 1,000 members a typical threshold to reach before a pumping begins. Usually the communication only goes in one direction: Only the organizer is allowed to post in the channel. This differentiates a telegram channel from a telegram group.

Once enough members have gathered in the group, the big wait begins. The pump organizer or channel administrator firstly announces the exact time when the pump should take place. To which Coin this is, does not betray the administrator thereby yet. Instead, he keeps the group members at the stake by the time the coin is announced with countdowns, motivational words, and behavioral strategies. This usually takes a few days.

Announcement of the pump candidate

At the agreed time, the pump organizer will then announce the coin to be pumped. This is usually done with the help of an image file, so that no bots can “read along”. This message is for the members of the channel the signal to buy the token. Through the concerted action, the price of the coin usually increases within a few minutes many times. During this time, the organizer of the pump summons the members of the channel to keep their coins, so that even outsiders can jump on the supposed moon rocket.

After a few minutes, in some cases even seconds, the price of the pumped coin has reached its peak. At the first sign of a sinking price, the wave of panic sales begins and the price drops sharply to pre-pump levels. In the case of a successful pump and dump, its initiator in particular benefits:

“Pump users are well aware that admins benefit the most from a pump. Mostly, the admin is able to sell his pre-hoarded coins at an inflated rate to other group members during the pump. “

The participants rely on the “theory of the bigger fool”, so that there is still a stupider to whom you can sell his inflated coins profitably.

To get an overview of the pumping activities on Telegram, the researchers fished data from the website pumpolymp.com. The site lists telegram channels dedicated to this form of market manipulation. In this way, the authors identified 220 pump-and-dump activities between July 19 and November 18 this year.

More than two-thirds (67 percent) of the manipulation took place on the Cryptopia crypto exchange, followed by Yobit (18 percent), Binance (11 percent) and Bittrex (4 percent). In every fourth case, there has already been a pump of the respective coin at the respective exchange. The authors also note that Binance’s involvement has resulted in significantly more users being involved in pump-and-dump activity. However, the corresponding price increases of the pumped coins were significantly lower at these trading venues than at Jobit and Cryptopia. The reason is the listing of low-capitalization coins, which are in vain on the big crypto exchanges.

“Pump-and-dump organizers who prefer Cryptopia are attracted to the large selection of low-capitalization coins listed on the stock exchange. It’s not surprising that small coins are more likely to be associated with fraud, leading to possible delisting, ” so the two authors.
Trade against the machine

Jihuana Xu and Benjamin Livshits have developed machine-learning models that can make predictions about upcoming pump and dumps. They looked at coins, which are listed at Cryptopia.

“On average, we have 358 candidates for a pump, one of which is the actual cryptocurrency pumped. The number of coins considered varies for each event due to the ongoing listing / delisting activity of the exchanges. The complete sample contains 47,487 pump-coin observations, and a total of 133 pump-and-dump cases have been reported […]. ”

Overall, the researchers fed their models with data from 46 categories, such as the market capitalization of the coin, whether it has been pumped before, the age of the currency, the transaction fees on Cryptopia and the volatility of the price. They used both the Random Forest classification procedure and General Linear Modeling approaches. The training was successful in various models. Thus, Jiahua Xu and Benjamin Livshits were able to correctly predict five out of six pumps between October 31 and November 4.

From this they developed a trading strategy in which the weighting of a portfolio is based on the probability of a pump of the individual components:

“[…] a simple but effective trading strategy that can be used in combination with the predictive models. Out-of-sample tests show that a return of up to 80 percent over three weeks can consistently be achieved even under conservative assumptions. “

If you want to get more involved with the interface of machine learning and crypto-trading, you should read the work of Jiahua Xu and Benjamin Livshits.

“The Anatomy of Cryptocurrency Pump-and-Dump Scheme” is a fascinating read for those who want to learn more about the predictions of crypto courses.