Pump-Groups arrange to manipulate prices in order to profit as easily as possible. Most participants, however, rise with losses.

“Pump Announcement: Monday, January 15, 8 pm GMT, Exchange: Cryptopia” – So the brief announcement where and when the next pumping will take place. As a communication channel for such announcements Telegram groups are used, some of which have several thousand members.

At 21:00 CET the trading code of the coin is announced in the corresponding telegram group, the price of which should be raised; in this case CMP. The instructions are self-explanatory: Buy, hold, and wait for CMP coins to rise, then quickly resell and reap the profits.

As the charts show, the organized pumps actually work. The CMP Coin has made a 19-fold increase in the price by the agreed price drift. Specifically, the price per coin has risen from 0.001052 BTC to 0.0206201 BTC, an increase of 1860 percent. After the pump group has withdrawn again, however, the price of the coin has fallen quickly back to the starting price. 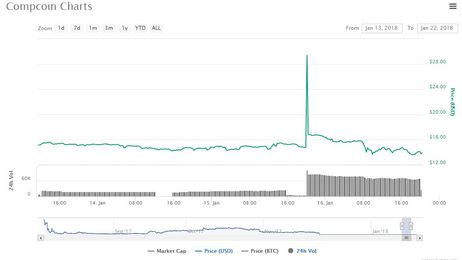 The procedure of such pump groups sounds tempting: quasi in passing times quickly recoup a few profits. But the whole thing has a big catch, as explained in numerous postings, including on Reddit.

The only winners of this type of organized price manipulation are those who start the pumps because they have a significant informational edge. When the trading code of the coin to be purchased is published, the organizers have long since purchased the corresponding coin. And gradually over a long period of time in order not to attract attention. Because the selected coins are almost unknown and have a 24-hour trading volume, which moves only in the four-digit dollar range.

Now, if Pump Group members start buying the coin and the price goes up, the organizers just have to wait for the right time to sell the coin. To get rid of the coin, they have to sell their shares as long as the members of the pump group still buy the coin. Otherwise, they will no longer find buyers.

And that is exactly what will happen to most of those who participate in such pumps: the information disadvantage will allow the majority of Pump Group members to buy the coin at an already elevated price. If you exit quickly, you could possibly take a bit more profit. If you wait a bit too long, you will stay on the coin, because suddenly everyone will try to shove the coin. Many will probably even make a loss if the price falls back to baseline after pumping.

Before participating in such price gouging can actually be discouraged. If you would like to watch such an organized pump live, you only have to join the telegram groups Smashing Pumpkings, WhalePump Reborn or Supreme Pumps and wait until a new pump is announced.