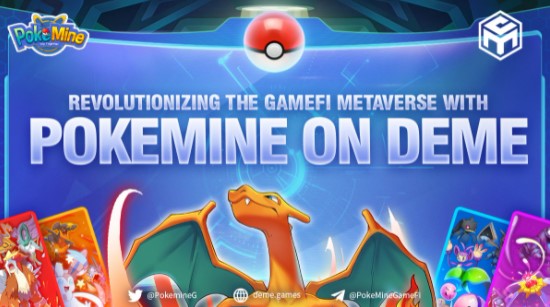 My name is Sato, co-founder of PokeMine and DEME. I was in the online dating industry back in 2015. A big issue of that industry was that there were lots of scammers. So, we thought of a way of building up a shared blacklist database with other dating apps to identify whether this newly registered user has any digital footprint that matches the data in this database. This way, we can identify the scammers at the early stages before they can harm other users. But we encountered huge difficulties in persuading all the dating apps to be part of this project. They wanted to use it, but they didn’t like to share their data. And blockchain is the natural way to deal with this problem. Ethereum just came out back then. We did some research and realized no mainnet back then could handle this database. We recognized this as an opportunity for us, so I led my team to get into Blockchain, starting with public chain development. We gained lots of technical experience, worked closely with some pretty famous projects in the market, then Join Games studio found us and we formed a new studio called DEME games, a metaverse GameFi studio. So yeah, this is my brief story.

Thanks, let’s talk about the economic model of PokeMine first. In PokeMine, there are several different assets. They are Pokemon NFTs, PokeMine Diamond as $PMD tokens, stamina, and gold coins. For users in the early stages, we have not made stamina and gold coins as independent circulating tokens, so that the game is easier to adapt to at the beginning. As more and more users are familiar with the game, stamina and gold coins will be traded and circulated in the market. All stamina, gold coins, and 75% of PMD can only be mined or earned in-game. 15% of PMD is reserved by early investors and development teams with a lock-up period of 24 months. 10% will be sold to the market with a lock-up period of 6 months.

Secondly, PokeMine has created a unique NFT mechanism so that the user’s NFT is no longer a work of art but a way to build characters in the game. PokeMine has 4 different colors of PokeMine NFTs, which are red, orange, purple, and blue (UR\SSR SR \ R \ N) in descending order of quality and Pokemon combat power. More powerful sprites are rarer. Users need to upgrade NFTs through PVE, or use equipment to upgrade Pokemons to improve combat power, endurance, attributes, etc., in order to deal with the Evil BOSS battle recently announced by PokeMine. To know more about the setting of Evil BOSS, you can follow PokeMine official Twitter to check the related content. In the official game, the PokeMine dispatch is the entry to participate in the challenge of the Evil BOSS. You can participate in the dispatch with the high-quality Pokemons you have or the limited Pokemons from the voting event. You can also use the water of time props dropped from the explore level to extend the dispatch time for a higher return.

PokeMine is an action card mobile game with Pokémon as its theme. It is the first Pokémon mobile game where players can independently evolve elves and change their appearance! The overall game restores the Pokémon world in depth. The game adds a variety of rich gameplay methods such as the classic Pokémon gacha system, Pokémon cultivation system, Checkpoint battles, Z move, Pokémon dispatch (mining), etc.

There are two different assets in PokeMine, NFT and PokeMine Diamond ($PMD). Currently, users can purchase PMD on MDEX, ButterSwap, and PancakeSwap, and can also use PMD to obtain Pokemon NFTs from the in-game Pokemon Center, as well as Treasureland. In addition, PokeMine is developing its own trading platform in NFT Market, which will be launched soon.

For specific operation details, players can refer to tutorial for PokeMine official version: 1.0.07

Players will get 3 initial Pokemons when they enter the game (note that these 3 Pokemons cannot be extracted). By consuming physical strength to pass the adventure level, the team EXP and PokeMine EXP obtained are used to level up. Players who reach a certain level can unlock other functions in the system, such as explore levels, Pokemon dispatch, and other functions of Pokemon training, etc. At present, the main way to obtain PMD is through the explore levels and Pokemon dispatch. Players can consume PMD to gacha NFT or Pokemon fragments from Gacha system, and they can participate in gold-making if they meet the conditions of elf dispatch. The Pokemon dispatch function adds a limited Pokemon mechanism, and the limited Pokemons are selected by voting and replaced regularly. The output mechanism of PMD in this level has also been optimized, and the output will be calculated based on the total combat power of the entire server. Players can get more rewards by using limited Pokemons or Pokemons with high combat power during the dispatch process.

Built-in scenes can also be used for real-time interaction. Efficient data interaction and processing capabilities can display all user data in time. Also, players can exchange ideas and experiences with other players in the “world” at any time, provided with an immersive experience. The in-game friend function has been opened in version 1.0.07. At present, the equipment function has not been opened yet. We look forward to giving players a brand new gold-making experience and promise to optimize the user experience and continue to work towards a better PokeMine GameFi!!!

In the past, there was no direct connection between games and finance to the connection between players and investors. But now, GameFi facilitates the interconnection between players and investors, allowing players to earn to play, which provides a new market model. In addition, GameFi endows NFT with more practical value through gamification settings. NFT items in the game are no longer just items sold on the NFT trading platform, but can also be directly traded in the market from the game, making the transaction process easier than traditional Game.

GameFi is an intuitive way for users to understand the metaverse. It started in the game industry, but in the future, it will further affect all aspects of human social life, such as social and financial. The global gaming market is expected to generate $175.8 billion of revenue in 2021 and exceed $200 billion in 2023. GameFi is in a relatively early stage of development and has huge potential.

The integration of NFTs with GameFi has paid off. It will continue to have a profound impact on the business model of the gaming industry and the ownership of in-game virtual assets at both the macro and micro levels. So what kind of magical chemistry will the combination of Pokémon and GameFi produce? No doubt, PokeMine is the right answer as the perfect restoration of the Pokemon world!!!

At present, GameFi projects on various public chains are very popular, and they are becoming more and more mature from an economic model to game play design. The huge game player base and overall market provide unprecedented opportunities for the development of GameFi. GameFi has become unstoppable with the vigorous development and another breakthrough in blockchain applications, or it can be said that they have become the final form of game development and the entrance to the metaverse. In-depth analysis, looking at GameFi from the three perspectives of GameFi’s economic model, autonomy and decentralization, we will find that GameFi is a transitional stage in the development of the metaverse and plays a very important role in connecting the past and the future. We all know that there are infinite possibilities and hopes behind GameFi, which is also the original intention of DEME studio to build a real decentralized metaverse platform by supporting different stable commercial blockchain infrastructures. PokeMine is our first answer sheet.

Currently, the PokeMine project has only launched part of functions in the game version 1.0.08. And it is worth paying attention to the announcement of the card pool released before the 1.0.07 version goes live. The amount of NFT to be produced is enough to make players excited. In addition, the official weekly project report is also a focus. To stabilize the operation of the PokeMine ecological, economic system, the setting of the PMD burn mechanism includes that the output of PMD in the whole server will increase the difficulty of production according to the increase in the total combat power of the whole server, and the PMD not produced by the Pokemon dispatched prize pool, consumed in gacha system and explore levels all will be destroyed. The specific content will be announced every week.

The dispatch level of PokeMine ushered in new gameplay — challenging the Evil Boss. In this mechanism, the Pokemon dispatch is the bridge to enter the time and space of the DEME metaverse. The Pokemons of justice in the Pokemon world are sent to fight against the evil bosses in the cave of time and space. When the total combat power of the whole server reaches a certain level, the corresponding PMD output can be unlocked. Currently, 7 levels of evil bosses have been officially announced, and the number of diamonds unlocked by the largest evil boss π·Mewtwo is X million (X>1.1 million).

This gameplay combines PokeMine’s currency sales mechanism in the elf dispatch level, the announcement of the PokeMine pool, and the real-time proposal, voting, and system parameter changes of the multiplier Pokemons in the Pokemon dispatch. The overall token mechanism in a deflationary state, the longer-term and more stable dual-deflation token economy, the complete destruction of the blind box for drawing cards, and the automatic adjustment of production and sales ratios to the game system, all contribute to the virtuous circle of the game economic system. As a leading chain game distribution platform in the industry, DEME’s first GameFi PokeMine is only the prototype of the DEME metaverse space. Players can also earn a lot of platform governance coins by playing in the game. Players own the platform and share development dividends.

In the future, PokeMine will explore a wider, deeper metaverse with all the PokeMiners together!!!