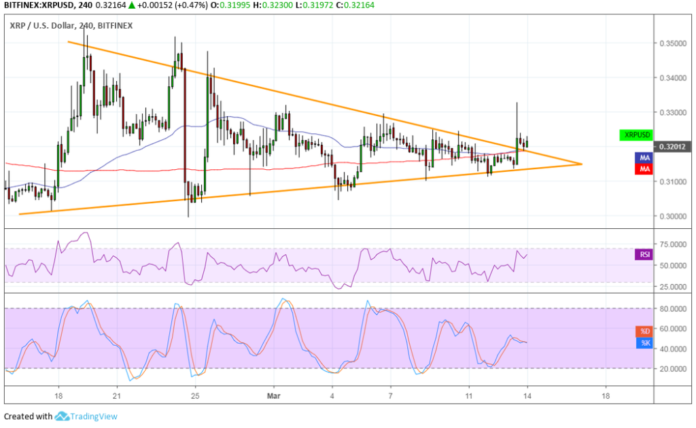 Ripple had been consolidating inside a symmetrical triangle for quite some time and was finally able to go for a breakout. Bulls won the round and pushed for a move above the resistance, possibly taking it for a rally that’s the same height as the chart formation.

The triangle spans 0.3000 to around 0.3500 so the resulting rally could last by 0.0500. The 100 SMA seems to be completing a bullish crossover from the 200 SMA to indicate that bullish momentum is picking up. Price is also above both moving averages, so these indicators could hold as dynamic support.

RSI is heading up to signal that bullish momentum is in play, but the oscillator is closing in on the overbought zone to indicate exhaustion soon. Stochastic is on middle ground but might be changing its mind halfway through to suggest that sellers are still trying to put up a fight. The long spike also suggests that the sudden breakout might be faded and price could resume consolidation or take the opposite direction.

A number of developments are being touted for spurring the upside breakout, one of which is the new investment of $100 million with gaming company Forte on Xpring. This can help bring digital assets like XRP to thriving mainstream video games with large numbers of daily active users.

“Forte’s technology stack includes components designed in close collaboration with Ripple, namely leveraging the open-source Interledger Protocol with XRP serving as a base pair settlement and the container-based hosting solution Codius supporting seamless transactions across blockchains,” as indicated in the official announcement.

Another big factor is the Binance support as confirmed by CEO CZ:

“We are happy to announce that we are releasing support for XRP. A lot of you have been asking for this addition. And it goes back to our promise of adding the top 20 cryptocurrencies. It was only a matter of time until we completed the Top 3 cryptocurrencies by market cap with newly integrated XRP.”