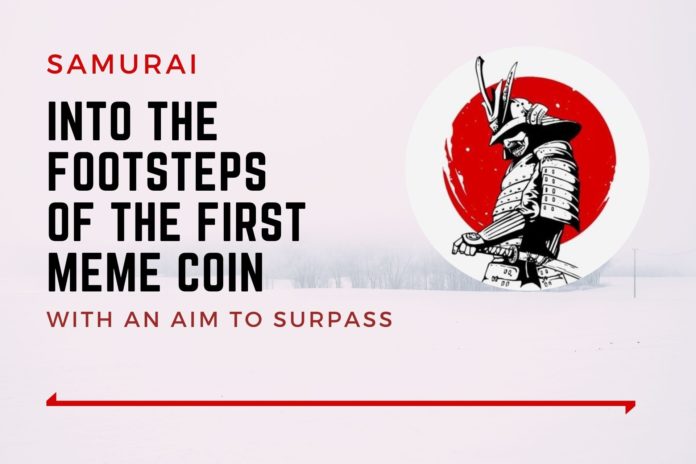 As a Meme coin, SAMURAI is a community-backed ERC 20 token smart contract executed on the Ethereum blockchain. One of the best ways $SAM developers thought for providing the maximum value to the community, was locking the liquidity forever.

However, locking the liquidity forever does not mean that users cannot stake the coins. The project allows users to stake coins on the platform and earn high rewards in return.

In other words, SAMURAI is on the way to bring the next revolution in the Crypto world with its innovative concept. The coin supply is limited, implying that as the community engages more with the coin, the price can rise to an unprecedented level.

SAMURAI is inspired by Dogecoin, and users can check out the current prices from exchange Probit, Coinmarketcap, Coingecko, and other popular platforms. This peer to peer community first token will help users grow and expand as the platform gets a better response and higher user engagement.

Based on the Concept of a Meme Coin

SAMURAI is highly inspired by the concept of meme coins and how every member works together to enjoy mutual benefits. So, the users are allowed to stake the coin to the SAM platform and get progressive rewards.

The way the project hopes to provide the existential benefits to the community is by locking the entire pool of 30,000 tokens on Uniswap. So, when all the tokens are locked and are also limited in quantity, the price will rise with time and popularity, which will bring benefits to the platform and the community.

SAMURAI aims to bypass Dogecoin even though this coin is inspired by Dogecoin. With this cryptocurrency concept, the higher the stack in the user’s wallet, the better will be reward generated out of the pool.

The SAMURAI contract is immutable and transparent, which certifies that there will be no minting and no burning. The initial supply of 30,000 tokens will remain the same until the end. This creates several benefits for the initial buyers and stakers. The users staking the project tokens will gain more because of the limited supply, and when the demand rises, the initial stakers or hodlers stand to gain immensely from the platform.

Benefits Accrued to the Stakers and Members

Working with the community is the prime function of every meme coin. That is what the users are experiencing and doing with dogecoin. The bars set by the dogecoin are so high that its market cap has crossed $1 billion. And the working model of SAMURAI can achieve that height on the shoulders of the community.

When it comes to benefits, there isn’t only the value of the SAM token that will bring the users benefits, but the way these guys have set the future roadmap, it will be a good journey.

Moreover, the collective efforts of the individuals will be augmented with the inherent features and limitations set forth. For instance, there are no whales on the platform, meaning that no user can hold such a quantity of the SAM token that they get the power to manipulate the community market.

The users can stake any amount of tokens they want and also withdraw the same amount at any time. There are no lock-in period limitations, and even after one day of staking, the users can withdraw the entire amount.

SAMURAI also uses SafeMath to prevent any sort of overflows, again protecting the community with smart and innovative features. All in all, the SAMURAI community users are going to enjoy the benefits of a future-ready platform.

The presale ended with a great performance and after that, the private sale of the SAMURAI tokens was also initiated. The price of 1ETH at the private sale was equal to 72 $SAM. During both, the rounds of sale 21,996 tokens came into supply.

SAMURAI is a cryptocoin and platform that is meant for the user and will be operated by the users. All users holding the SAM coin also earn voting power and they can participate in the decisions for the future roadmap.

From launching the staking platform to developing a SAMURAI game and interoperability integrations, there is a lot that the developers have planned for in the future.