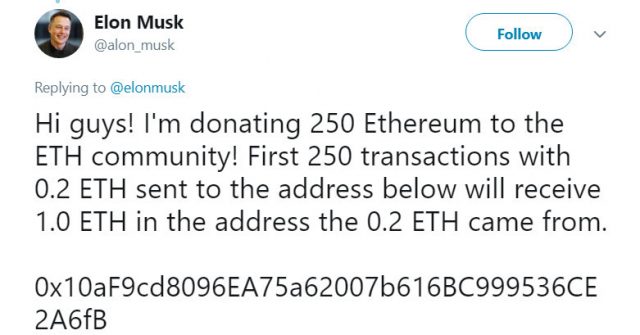 Twitter hackers have made off with hundreds of thousands of dollars worth of Bitcoin and other cryptocurrencies, in a series of scams related to Tesla’s Elon Musk. The scams usually work like this: Someone makes or steals a Twitter account, changes it so that it looks like it’s the account of Elon Musk, and offers to give away Bitcoin or Ethereum. The catch is: people have to send in a little bit of their own Bitcoin first, before their larger payment gets released.

Two professional Twitter accounts were hacked in a recent scam. The United Kingdom’s Matalan and the United States’ Pantheon Books were both briefly compromised. Interestingly, they had been transformed into fake Elon Musk Ethereum accounts, and scammers were raking in free digital currency.

The message was simple: “I’m giving away 10 000 Bitcoin (BTC) to all community! I left the post of director of Tesla, thank you all for your support.” And later, “I decided to make the best crypto-giveaway in the world, for all my readers who use Bitcoin… To verify your [Bitcoin] address, send from 0.1 to 2 BTC to the address below and get from 1 to 20 BTC back.”

More than 400 Twitter users were taken in by this scam alone. In total, more than 28 Bitcoin were sent to the scammer address, together worth nearly $200,000 at today’s Bitcoin price. Most users sent in the minimum 0.1 BTC, but a few users sent close to 1 BTC each, losing approximately $6000 worth of digital currency in the bargain.

The scams were stopped in short order, and Twitter is catching more of these schemes every day. Nonetheless, Twitter crypto scams are not hard to find. So what does this mean for cryptocurrency, and in particular for new or unsophisticated users who might be easily fooled by scams like this?

Learning to Protect Yourself From Crypto Scams

There’s an old saying: “A fool and his money are soon parted”, and another that goes “Fool me once, shame on you; fool me twice, shame on me.” Cryptocurrency is still a brand new technology to most people. Many enter the space because they’re interested in digital currencies, but most of these people don’t understand much about the space just yet.

It’s also important for users to learn how to spot scams. There are hundreds of billions of dollars wrapped up in the cryptocurrency markets. Great concentrations of capital are always going to attract scammers. Users can’t always trust the authorities to catch every dishonest actor. Users have to learn the rules of Bitcoin on their own. Here are some of the most telling signs of a cryptocurrency scam.

If you buy Bitcoin, you certainly don’t want to lose it to a Twitter scammer. Take the time to understand the market you’re buying into – the social media environment, local laws and regulations, the story behind various coins, exchanges, and crypto personalities. The more you know, the less chance that someone can take advantage of you. Twitter may never be able to stamp out these Elon Musk crypto scams fully, but at least you won’t be one of the ones losing money to them.

The post The Elon Musk Crypto Twitter Scam is a Problem appeared first on The Independent Republic.