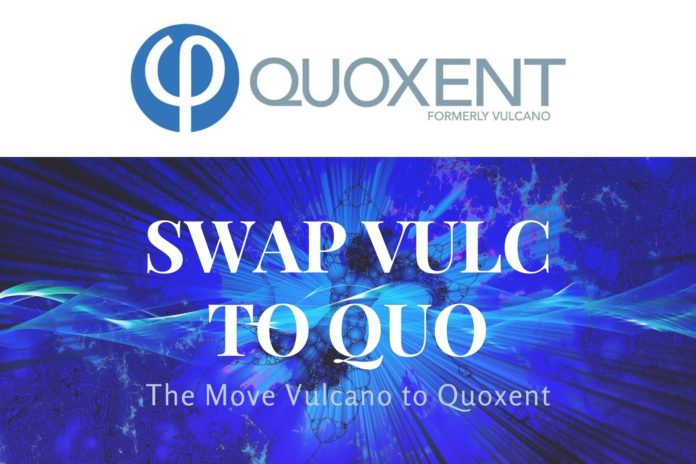 The Proof-of-Stake and Masternode-based distributed ledger Quoxent has finally decided to move this community-driven project (previously called Vulcano) to the Ethereum blockchain network.

Quoxent founder Jason Brink aka BitBender recently announced that the swap for the VULC token to a new ERC20 QUO token is finally live. Starting October 6, the token swap will continue for a month-long period up to November 8.

The decision for token swapping can favor the Quoxent ecosystem as the ERC20 tokens have been in great demand and easily swapped with other similar ones. Besides, it also makes it easy to list QUO on additional exchanges and other decentralized exchanges (DEXs). Users can access the VULC-to-QUO token swap on TXbit.io.

However, the automated swap feature only supports a minimum of 1,000,000 VULC. Any smaller amount sent to the swap address could be lost. Users with less than 1 million VULC can set up their accounts with TXbit and deposit all their VULC before November 7 at 0:00 UTC. Post this deadline, all the VULCs would be swapped for the ERC20 QUO that can be later moved to any external wallet.

Users can also store all their QUO tokens on an Ethereum-based wallet that accepts the ERC20 tokens.

Quoxent will also leverage Ethereum’s masternode setup required for the commercial implementation of its hardware models. The goal of Quoxent is leveraging the power of blockchain and the distributed ledger to its different IoT applications. Thus, in the future mainnet versions of Quoxent, each of its IoT tracking devices will come with a Masternode attached to help secure the network.

Additionally, moving to the Ethereum blockchain will also help Quoxent test multiple cased the team has developed. This will further accelerate the development of the platform and help it reach its goal.

As said, Quoxent is a proof-of-stake and masternode-based distributed ledger for Internet-of-Things (IoT) designed with the purpose of data transmission and verification of the IoT world.

The primary focus of the project is developing different use-cases to connect the IoT world by using the power of distributed ledger. By using the mixed PoS and Masternode system, the QUO ledger is absolutely tamper-proof and secure. Also, the QUO ledger is absolutely immutable and data is preserved for perpetuity. The QUO ledger has low block times which means that transactions can be confirmed quickly, an essential requirement for blockchain applications.

The QUO distributed ledger is useful in diverse IoT applications like logistics tracking, distributed climate data, and in earth-science innovations.

Although QUO existed as a token on the Ethereum blockchain, its long-term goal is to have an indigenous blockchain of its own. Users can track the price of ERC20 QUO tokens on CoinMarketCap and CoinGecko.