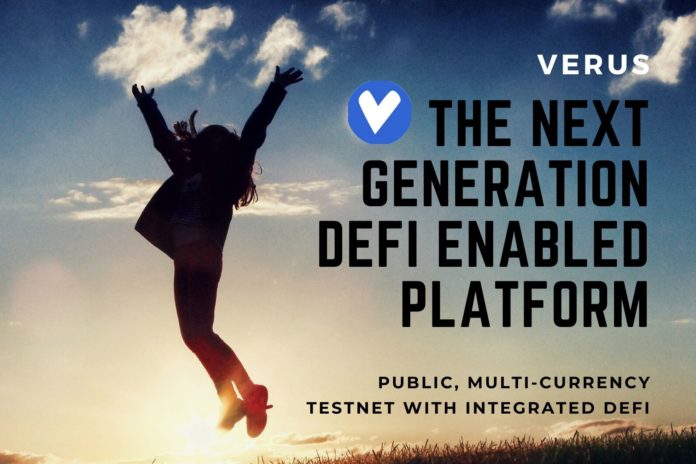 While most protocols offer partial solutions that don’t fit together or scale, Verus’ whole system build offers fundamental advances woven into the protocol layer that create an interoperable-blockchain DeFi network.

Seattle, September 10th, 2020: Pioneering, community-driven blockchain, The Verus Project, announces the official launch of its public, multi-currency testnet with integrated DeFi and liquidity protocols. Development of these new blockchain capabilities is led by Verus developer Mike Toutonghi, a software veteran who led Kernel development on Microsoft 95. Mike’s an ex-Vice President and Technical Fellow at Microsoft, one of the founders of Microsoft’s Java and .Net platforms, and has served as CTO for Parallels, Inc. as well as a machine learning consultant for companies like Synacor and others. Mike Toutonghi as well as numerous other developers and contributors across the community, each with just as interesting backgrounds, are committed to building the world’s future blockchain infrastructure, applying cutting-edge decentralized technology to make fundamental financial systems, people-powered and available to all.

Once the testnet has completed this phase as validation, these features will be available on the main Verus network and in Verus Desktop and via a mobile experience that will enable Fiat on and off ramps in 145 countries around the world. Verus Desktop and Verus Mobile also support many popular currencies, including Bitcoin, Zcash, ETH and ERC20 tokens already. The Verus backend business software, such as mining pools, explorers, self-sovereign payment systems, are also community developed and maintained and available as open source for customization or productization and as tools for building more specialized applications or businesses.

Mike Toutonghi, the Lead Developer, had this to say: “Similar to the early days of PCs or emergence of the Internet, today’s blockchain networks are like single-tasking PCs with so much more potential. I see multi-currency protocols as a requirement to enable a decentralized financial network of blockchains and subnetworks that interoperate seamlessly together. Today’s DeFi systems are too often being built at an application level, while native blockchain currencies, like ETH, BTC, or most every other depends on its currency protocol, including emission and inflation, at the system layer. Much like multitasking and TCP/IP, I believe tomorrow’s decentralized financial networks need multi-currency protocols at the core in a way that can affect consensus. That is required for natural blockchain security and seamless interoperability across networks. That vision guides the evolution of the Verus platform.”

The upcoming release, available now on testnet, will enable the definition of currencies that can be launched on-chain with Kickstarter-like minimum participation or created as fractional reserve currencies (backed by Verus or a multi-currency basket) with continuous algorithmic conversion and liquidity.

Starting with Ethereum as its first multi-currency bridge to other networks, the Verus cross-chain multi-currency and identity protocols enable interoperability across the world’s blockchain networks, allowing for a decentralized Internet of blockchains, currencies, and tokens and the next evolution in decentralized world finance. The new tools and capabilities on today’s Verus testnet will encourage people to move from a single currency or chain mentality to one of cryptocurrency fungibility and blockchain project collaboration, which in the Verus Vision, is what enables society to benefit from the potential of Public Blockchains as a Service (PBaaS).

Verus is the next generation DeFi enabled platform, which was designed as a scalable, secure, public network with privacy built-in. Verus was fairly launched with no ICO, no pre-mine, with advance mining notice on the BitcoinTalk forum, and no development fee or other rent-seeking taxes. Verus offers recoverable friendly name identities, and unique smart transactions to ease the development of applications and services. In addition to these capabilities, which are available today using the Verus Desktop GUI application for Windows, Mac, and Linux platforms, Verus is testing its upcoming release that supports unlimited tokenization of assets. It is a truly free, decentralized protocol and a rent-free blockchain framework that provides chain interoperability that can scale to the world. Once on mainnet, the Verus DeFi system will be a fractal, market-driven, and completely liquid worldwide network of independently valued currencies and protocol-based currency baskets. The Verus community continues to grow organically with one-hundred percent of rewards from the network returned to miners and stakers. The project is supported by contributors around the world and an independent non-profit foundation that offers bounties, and aids in the decentralized building of technology by the community.