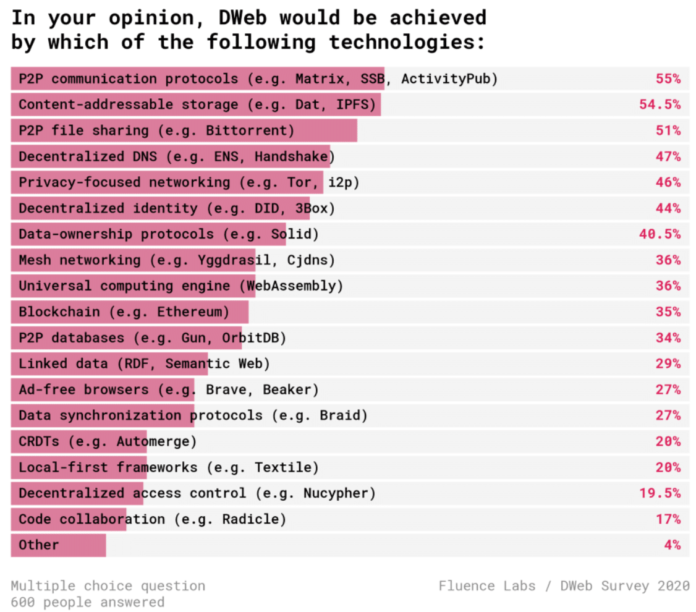 The decentralized or distributed web (DWeb) is widely slated as the natural evolution of the web thanks to its potential to claw back power from the centralized entities that currently dominate the internet landscape and return it to us—the users.

A recent paradigm shift has seen users demand control of their data, while an incredible uptick in open-source developments has given rise to a medley of technologies like Tor, BitTorrent, and blockchain, which many see as the fundamental building blocks of the DWeb.

To better understand the current state of this rapidly emerging set of technologies, we at Fluence took up the task of surveying more than 600 individuals, two-thirds of which cited a direct tech background, and 231 were actively working on DWeb projects. From these responses, we distilled some interesting and sometimes sobering insights and opinions about the current states of the DWeb.

Editor’s note: The following article is a guest post from Mark Power of Polygrowth.io. The article frequently references a 2020 Decentralized Web Development Report by Fluence Network.

As with many potentially disruptive technologies, a great deal of work usually needs to go into building out a variety of other precursors, and synergistic technologies before the full capabilities of a newer technology are entirely made clear.

This is undoubtedly the case with the DWeb, which will likely be formed from a wide array of accessory technologies, which might include P2P communication protocols, privacy-focused networks, and decentralized DNS, among others. However, many of these are still in an early stage of development, while some significant technical challenges for the DWeb are yet to be solved.

More than half of survey respondents agreed that P2P file sharing, content-addressable storage, and P2P communication protocols would be necessary to achieve DWeb. Conversely, this figure drops to just 40.5% for data-ownership protocols like Solid and 35% for blockchain.

Despite this, similar to the results of our 2019 Dapp Survey, almost half (44%) of those in the DWeb sphere highlights a lack of documentation and learning resources as the most frustrating thing about DWeb tech. This was closely followed by the difficulties involved in applying (42%) and integrating (40%) the technology. Curiously, a small minority of respondents (11%) believe the technology simply doesn’t work.

Nonetheless, some current open-source DWeb projects have managed to gain significant traction among respondents—of these, IPFS and Ethereum are used by 36% and 25% of respondents respectively, whereas Dat (14%), ActivityPub (13%), WebTorrent (12%), and Libp2p (12%) also stand out as popular platforms and protocols for DWeb development.

Overall, like many emerging innovations, technical challenges combined with the simple fragmentation of resources and information make up the majority of the issues faced by DWeb developers.

Although technical challenges are a significant obstacle to the development and growth of the DWeb, around 70% of respondents believe that a general lack of user understanding is another significant roadblock. Comparatively, 49% believe that tech immaturity is one of the biggest obstacles, while 42% cited the resistance from tech giants as one of the biggest obstacles moving towards the DWeb.

Scaling further in, we asked projects about their challenges in achieving mass user adoption, to which 59% cited a lack of maturity, 35.5% found it challenging to onboard and educate new users, and 24% believe the low number of total DWeb users is a significant factor. One respondent puts it like this:

“The biggest barrier to adoption is making the tech easy to use. Right now, for non-techy people, it’s difficult even to understand what DWeb is, let alone use the tech.”

These challenges might explain why many DWeb products have failed to achieve significant user adoption, with only 2% of 228 respondents saying their project has between 10,000 and 100,000 monthly users. In comparison, 35% haven’t launched yet, and around 21% have under 100 monthly users.

Although growing pains are to be expected with new technologies, challenges resulting from complicated user experiences and stiff competition from more fleshed out centralized options have proven to be significant obstacles to growth.

Blockchain Promising, But No Silver Bullet: Does Blockchain Internet Have a Shot?

While a one-size-fits-all solution to the challenges of developing the DWeb would undoubtedly be a welcome development, the issues are so multiplex that this is unlikely to be the case.

Instead, our survey indicates that 75.5% of respondents believe data sovereignty issues with the current web implementation should be tackled first. In comparison, data privacy (59%), tech resilience and resistance to interruption (56%) and security issues (51%) were also popular picks for the first lines of development.

These results fit firmly with the burgeoning narrative of users increasingly looking to take their privacy and security into their own hands, shunning the data mines and centralized hubs that underlie many of the biggest gripes with the current web—such as censorship, covert data monetization, and privacy abuse.

Though blockchains represent perhaps the most versatile peer-to-peer system in current usage and are frequently touted as the solution to data privacy, interference, and centralization concerns suffered by many systems, the majority of survey respondents (58%) believe that the technology isn’t a silver bullet solution to the challenges associated with the DWeb.

Opinions of the blockchain from the study.

This tells us that there is still a stark divide on the potential of blockchain—a technology that remains unproven in many aspects but still widely lauded as the future of many industries. Two quotes we received perfectly sum up the wildly contrasting opinions of our respondents.

“Interesting solution, but not practical due to its massive energy needs. It also does not scale!” said one respondent. “Possibly useful for P2P systems where people can contribute resources (e.g. storage) to a pool or pay to use it,” said another.

Business Models Need to be Clarified

We found that the business models surrounding the DWeb remain one of the major hurdles for developers, many of which have struggled to identify a viable way to monetize their projects.

Overall, only 15% of respondents cited their project included a paid product, whereas just 1% gets by with advertising revenue—drastically different from that seen by centralized data monetization methods. Instead, a whopping 30% do not extract money from their project at all and a further 22.5% plans to figure out monetization at a later date.

Accordingly, more than half of these Decentralized Web projects are self-funded, while almost a fifth are VC/Angel funded.

All-in-all, though it is clear that there is a great need for DWeb technologies and significant support lying in wait, a range of technical hurdles, UX challenges, and roadblocks will need to be addressed to truly compete with the simplicity and functionality offered by the centralized models in popular usage today. Nonetheless, the vision of DWeb is certainly one worth pursuing, and the foundations are slowly, but surely being laid today.

The post The State of the Decentralized Web (DWeb): Key Industry Insights appeared first on CoinCentral.