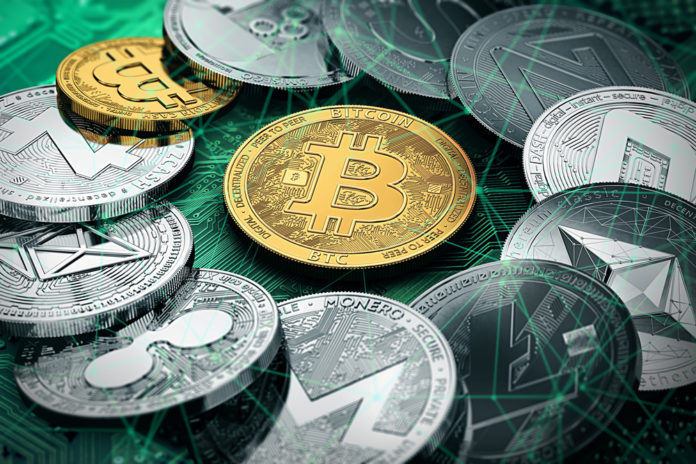 One of the most interesting questions in the Crypto sphere is which cryptocurrencies will assert themselves in the long term, and in the future will be able to satisfy a real need outside of crypto-trading.

In this article, we will try to look to the future which projects in 2020 could be a good investment in the top 10 cryptocurrencies by market cap.

In addition, we assume that it must be already existing projects that have already reached a certain level of development, which provides for at least one Mainnet or in the next few months upcoming Mainnet Launch. The analysis is still based on the experience of recent years that has shown that developing a working cryptocurrency takes a long time.

However, the list proposed here should by no means constitute a buy recommendation, but merely form a basis for discussion. We are aware that by no means all readers will share our opinion about our compilation. We within the Coin-Hero editorial team have also been hotly debating individual positions and are still not 100% in agreement with some digital currencies.

Different and controversial opinions are self-evident in this regard from our point of view. The technology is still too young and the development of individual projects is unclear or underdeveloped. In the comments we would be pleased about constructive criticism as well as your top 10 list.

Our Top 10 Cryptocurrencies by Market Capitalization in 2020

Many cryptocurrencies many uses

Ethereum is our first choice. Ethereum will, in our opinion, be the world’s leading platform for developing distributed enterprise applications on the Blockchain.

The increasing demand and use of the Ethereum Blockchain will be a key to success. This is driven on the one hand by the development of the DApps and on the other hand by the functionality as a possible investment vehicle. However, there will be a race.

Can Ethereum improve scalability before EOS and other DApp platforms capture too much market share? Since sharding is likely to take some more time, the development of the plasma scaling solution, whose development has already been advanced by OmiseGo, will be of great importance. The Ethereum Blockchain could then process one million transactions per second and expand its supremacy.

In addition, Ethereum has the Enterprise Ethereum Alliance in its back. It connects Fortune 500 companies, startups, academics and technology providers with Ethereum experts.

The alliance’s common goal is to define enterprise-class software that can handle the most complex and demanding applications at high speed. Already in the list of founding members are numerous well-known companies, such as. a. Microsoft, ING, UBS, BP and Intel again: 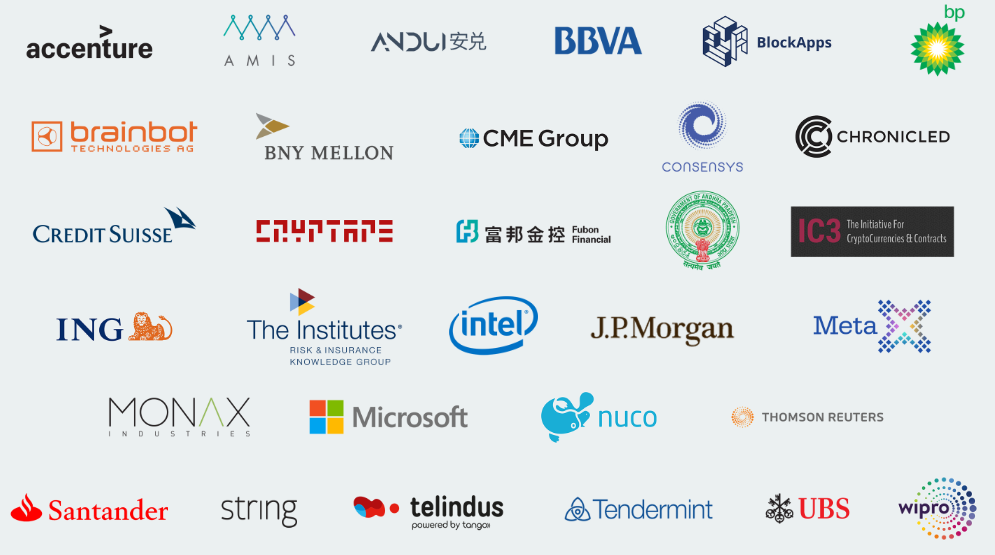 In the future, a refrigerator will automatically order food when the refrigerator is empty, and cars will automatically book and pay for the parking garage ticket. IOTA will be the backbone of Internet of Things transactions and make machine-to-machine payments. Especially the areas of smart cities, supply chain and mobility could be important areas of application.

IOTA has already been able to convince BOSCH, VW and Fujitsu of the potential of Tangle technology and win them over as a partner. Bosch has acquired a considerable amount of IOTA. The capital of Taiwan, Taipei City, has entered into a partnership with IOTA to create a Smart City. The Tangle technology is designed to create a series of technical innovations for the city’s residents.

Furthermore, the new project Qubic holds enormous potential, as long as the promised areas of application can actually be covered.

Ripple is a controversial project in the crypto community because of its proximity to the banking system and the issue of network decentralization. Yet, unlike any other project, Ripple has numerous partnerships. Most recently, at the Money 20/20 Europe conference, Ripple’s CEO stated that by 2019, the number of banks using Ripple technologies will increase significantly.

As we said earlier, Ripple CEO Brad Garlinghouse believes Ripple will meet business needs through a clear use case, and will therefore be faster and more prevalent than other digital currencies.

Ripple currently has several blockchain-based software solutions in use by financial institutions. Garlinghouse, however, is convinced that xRapid, which uses the XRP token, will persuade more and more banks by 2019, and will thus use the XRP token.

Already, Ripple can look at a large network of more than 100 banks and financial service providers. These include u. a. LianLian International, Santander Bank, IDT Corporate and MercuryFX, Rakbank, Standard Charter and AXIS Bank.

Regardless of supporting Ripple’s basic idea, Ripple will, in our opinion, be in the top three.

Comparing EOS and Ethereum, it is noticeable that both platforms pursue similar goals. Like Ethereum, EOS is also aiming to create a blockchain-based platform to develop commercial decentralized applications.

The EOS Mainnet is currently in the starting blocks and promises some features that could make it superior to Ethereum in the short term. There will be no transaction fees in the EOS network, and any Dapp developer can decide for themselves whether or not to charge for their EOS-based currency. In addition, EOS will be able to handle 1 million transactions per second in the future (it will be less at the start of Mainnet).

In our view, EOS will be the leading platform outside of Asia and Russia, thanks to strong technology with Ethereum, to develop enterprise applications on the Blockchain.

In our opinion, Bitcoin will continue to lose market dominance until 2020, and possibly also its first place and its function as reserve currency. Historically, the dominance of Bitcoin in terms of total market capitalization has fallen from 95% to 85% and temporarily to 32% in January 2018.

However, we believe the Bitcoin price will be driven by institutional money and the entry of new investors, especially in the second half of 2018 and 2019.

In our opinion, the inflow of large amounts of institutional capital is not a question of “if” but of “when”. As we have already reported, many companies around the world are planning to do so. a. also the NASDAQ, entry into the cryptocurrency market. This will initially benefit Bitcoin, which will continue to attract large investors in 2018 as the reserve currency and the most established cryptocurrency.

In addition, the commissioning of the Lightning Network will lead to increased acceptance of the Bitcoin if it can live up to expectations. During a potential global financial crisis, Bitcoin can serve as a global crypto reserve currency (“crypto-gold”).

Nevertheless, there are some technical challenges for Bitcoin to solve. The main problem, in our opinion, is to make technical changes in the inertia of the Bitcoin network and to reach consensus on the future evolution of Bitcoin.

Obscurity exists e.g. regarding the use of the Lightning Network as an off-chain scaling solution, as the following video explains very simply and clearly.

In our view, Bitcoin will serve as the “original” cryptocurrency in 2020, especially as a store of value. However, other cryptocurrencies will gradually outstrip Bitcoin’s technical superiority and become more prevalent and exploitable.

Cardano (Ada) is a very ambitious project that is less driven by hype and expectations, but much more by a staggering evolution.

It is designed to build a new decentralized economy and democratize financial markets in emerging markets. Cardano enables the cost-effective, secure, and scalable creation and execution of distributed applications and smart contracts, and values ​​a highly scientific approach.

By 2020, Cardano should be fully functional.

In addition to technical reasons, NEO and Onchain’s relations with the Chinese government in particular play an important role in the placement of NEO.

NEO uses as a consensus method “delegated Byzantine Fault Tolerance” or dBFT. The main advantage of this method is that it prevents splitting of the system and allows no forks. In addition, NEO has a 2-layer (Trinity) scaling solution that can handle up to 10,000 transactions per second and is quantum-computer-resistant.

But even more important is the relationship with the Chinese government. 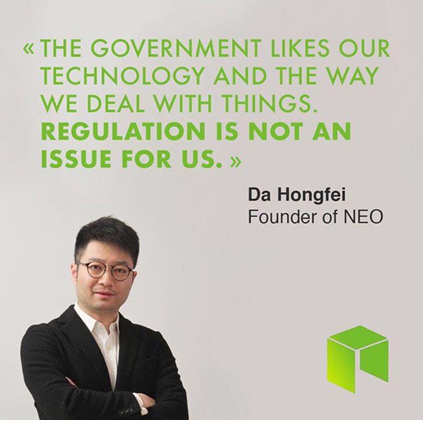 NEO is currently centralized by Onchain. This will be preserved until a stable and fully functional version of NEO has been developed. Critics doubt, however, that this will change in the future. In this respect it is also described as the “China way”. OnChain works with the Chinese government and numerous companies that are important to the adoption and use of NEO.

VeChain enables manufacturers, suppliers, and customers to capture, manage, and share all critical information about a product throughout the lifecycle of supply chain management. The Vechain Thor Mainnet is expected to launch in late June.

In January, the internationally active classification society DNV GL announced a partnership with VeChain. The goal of the collaboration is to develop a blockchain platform for tracking food and beverages, as well as examining application to the fashion, retail and automotive and aerospace industries.

In our view, Vechain Thor will be the leading supply chain management Blochchain in 2020.

The Thai Ministry of Digital Affairs and Omise signed a Memorandum of Understanding at the end of February 2018, in which both parties declared their willingness to develop a nationwide online payment and identification system based on the OmiseGo technology.

This would soon make Thailand one of the first countries in the world to officially implement blockchain technology for its people. OMG could be the first open source cryptocurrency officially used by a country.

From our point of view, a Privacy Coin is in the top 10 of 2020, as Privacy Coins will always meet a specific use case, namely the performance of anonymous transactions, and this need will increase in the near future.

Monero was launched in 2014 and has since become one of the most stable and secure privacy coins. XMR allows to completely anonymize the transaction information. Due to the strong development team, Monero will also be in the Top 10 in our opinion.

article source Coin-Hero in German with thanks