After trading in a basing pattern for the past three (3) months in the February through April period, Tron (TRX) popped-out out of the sideways grind in late April on greater than 2X its average daily trading volume and has since found itself trading within a coil that continues to tighten.

While overall market conditions have remained range-bound with no real leadership to speak of at the moment, it’s not surprising that we have yet to see any follow-through from TRX as it appears that the cryptocurrency universe is awaiting some form of catalyst to trigger the next directional move.

Nevertheless, despite the lack of volatility that both investors/traders have been treated to over the course of the past several days, TRX continues to display favorable technical characteristics trading above both its 20 and 50DMA’s as we can observe from the chart below: 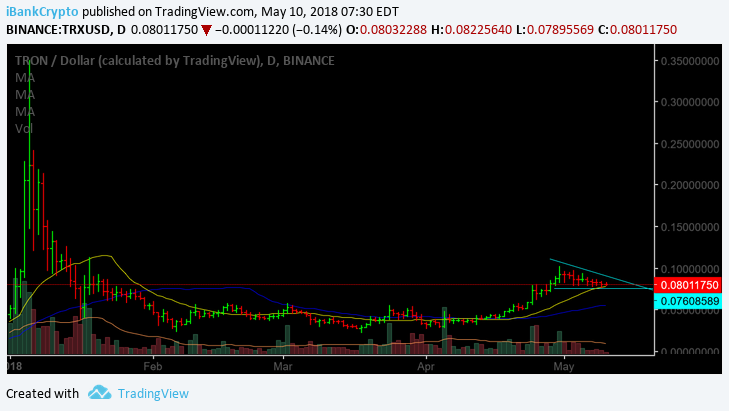 Observing the above, we can see that TRX appears to be complacent within its side-ways churn/grind for the time being trading in a tight coil pattern within the triangle awaiting its next move.

We can also observe that TRX remains perched above both it 20 and 50DMA’s which represents a favorable technical posture, while also riding its 20DMA, which has been acting as its guide.

Although there appears to be very little activity to speak of within the action taking place in TRX at this time, such suggests that in the not too distant future, we may just be treated to an awakening that may catch many off-guard, whether that be a thrust top-side out of the coiling triangle pattern or perhaps, a move below.

While it’s certainly premature to decipher in which direction TRX has in store, both investors/traders may want to pay close attention to the action in Tron in the days/weeks ahead as it awaits its next catalyst, whether that be fundamental (News) or technical.

With that said, moving forward, if at any time TRX can go top-side of the .0977 level and perhaps more importantly, can clear the .1024 figure, such move, should it materialize, would suggest greener pastures, while levels of potential short-term support can be found at the .076 and .062-.065 zone.

Thus, as previously noted, while the action appears subdued at this time, both investors/traders may want to pay close attention to the coiling taking place at present as we suspect that a move out of the triangle is imminent within the days ahead.