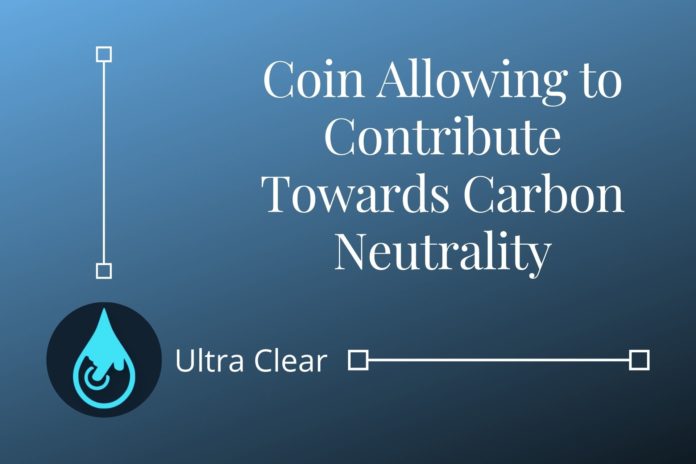 Helping Mother Earth rejuvenate in the time of adversity is what every human must do with great enthusiasm and zeal. The efforts to help the environment get better and conducive to human health are not very visible, which can be due to many reasons.

One of them can be the inability to earn or get rewarded in the form of compensation for the efforts put in by the users. However, that can be changed with the help of Ultra Clear Coin, a fantastic and future-ready project that has been recently launched. Although some of its aspects are still under development, the major part has been released, and this crypto coin works to benefit the users by encouraging them to inspire action and efforts of environment saving.

Ultra Clear Coin is associated with the concept of carbon neutrality, and it seeks to reward the organizations and individuals contributing to this goal. The motive is to capitalize on the method, exercises, and attempt to reduce carbon emissions in the environment. With this approach, organizations that felt pushed down before will be better off, because their attempt to reduce carbon will now get due compensation and bring them out from a competitively disadvantaged position.

Since the concept of Ultra Clear Coin is to allow users to get rewarded for carbon reduction, such a coin truly defines the core motive of enabling a crypto world. UCR will fuse the possibilities of cryptocurrency with the practices and ethos to protect the environment. And this is one of the greatest benefits of this particular platform

Ultra Clear Coin or UCR will act as a monetary support structure for the organizations that decide to make a significant contribution to carbon saving. The reason why UCR aims to provide monetary rewards is that by allowing the market forces to determine the reward system, the users will be motivated and encouraged to work in this direction more to get better rewards.

In addition to this, users can also leverage the ability of UCR to fund new projects or allow individuals and businesses that were previously not motivated or interested in taking part in such projects.

Many things are still underdeveloped or in the final stages of deployment. However, users who are ready to get involved at an early stage can get better benefits as they can operate the master nodes and gain more rewards with every block of UCR tokens in circulation.

The rewards generated for the master node operators are based on the concept of carbon savings. So, the more carbon emissions have reduced, the rewards also increase pro-rata. Such a concept will not only inspire the master node operators or the community members of UCR to act intelligently towards the environment but also encourage others to do so.

Masternode Rewards and the Working Principle

UCR will run through the master nodes, at least till no new developments are shared with the users. Because to become a master node operator, a user has to buy a set amount of UCR coins as collateral. The users can buy UCR coins from coingecko.

Furthermore, there are several stations to check the performance and get an update on the UCR coins. This includes masternodes.biz and UCR’s native explorer. Moreover, the master node program account setup and operations capabilities are implemented by other partner platforms like Heliobank, Crypos.io, and Vaultwatch.

As it has been stated before, that with every new block generated and validated, the master node operators can receive more and better rewards. From Fork to 700,000 block end, the users are required to submit collateral of 60,000 UCR and will become eligible to receive 65 coins with a staking reward of 5 coins.

Similarly, as the number of blocks increases, the master node reward also increases while the POS reward is constant across all the levels.

Tokenomics of the UCR

In total, there are 1,000,000,000 coins or UCR available on the platform that will be staked or can be bought to become a master node operator. To help the users stay updated with the block information, they can access the UCR explorer and also get a list of staking transactions that are done on UCR.

To further help users operate on the UCR, the developers have provided system software that can be downloaded on any Windows, Mac, and Linux operating systems. Apart from this, UCR master nodes can also be bought and operated from Trittium online platform that is known for its master node hosting.

A cryptocurrency that will integrate with saving the environment and help users become proactive in their approach was long due. Such a platform where the users will feel safe and protected for their efforts towards carbon reduction, helps the government achieve the status of carbon neutrality is a great initiative.

UCR is still bringing new features and aspects to users, and has a high potential to garner interest from the users on a large scale.